135-year-old Buddhist Temple in Shanghai is on the Move The main hall of Shanghai’s famed Jade Buddha Temple needs to be moved 30.66 meters to the north. From nationmultimedia.com

Shanghai’s famed Jade Buddha Temple, which has been undergoing renovation since 2014, is presently witnessing the most daring yet delicate stage of its makeover plan, which involves pushing the Buddhist temple’s main hall 30.66 meters northwards as part of an initiative to modernize and improve the site, a popular place of worship for Buddhists in the busy city and a major tourist attraction.

The temple’s abbot, Master Jue Xing, who is also vice president of the Buddhist Association of China, said relocating the hall would create more space in the temple’s main forecourt, reducing fire hazards and the potential danger of a stampede as the temple is regularly packed with crowds of visitors.

In common with many modern temples in China, Jade Buddha Temple draws from both the Pure Land and Chan traditions of Mahayana Buddhism. It was founded in 1882 with two jade Buddha statues brought to Shanghai from Burma (now Myanmar)—a 1.95 meter seated Buddha and a smaller reclining Buddha representing the Buddha’s parinirvana. The temple also contains a four-meter marble reclining Buddha donated from Singapore. Work to move the main hall of Jade Buddha Temple should be completed by mid-September. Photo by Ren Long. From ecns.com

“The temple was originally an old residential house whose owner donated it to the temple to house the two jade Buddha sculptures,” said a temple official, adding that some of the temple’s aging wood-and-brick buildings struggled to accommodate the growing numbers of visitors who flock to the temple every day. (ShanghaiDaily.com)

Located in the middle of Shanghai, Jade Buddha Temple—also known as Yufo Temple—attracts more than 2 million visitors per year, with daily visitors climbing as high as 100,000 during special holidays and festivals.

The ambitious relocation is taking place over a period of about two weeks and is expected to be completed by mid-September. The painstaking project will more than double the size of the square in from of the main hall, where visitors regularly gather to burn incense sticks, to about 1,000 square meters. The building’s new resting place will also place it 1.05 meters higher.

The numerous Buddhist statues and relics housed within the hall will remain in place while the move is carried out. Master Jue Xing noted that special measures had been taken to protect and stabilize the hall’s valuable contents, with the supervision of relic preservation experts from Shanghai Museum.

Engineers have already removed the wooden support pillars from the hall’s original stone foundations and moved them onto a special platform with a custom-built “rail track” beneath it, said project manager Shen Junqi, “It is a great challenge to protect the whole structure and cultural heritages [sic] inside,” he noted. (ShanghaiDaily.com) 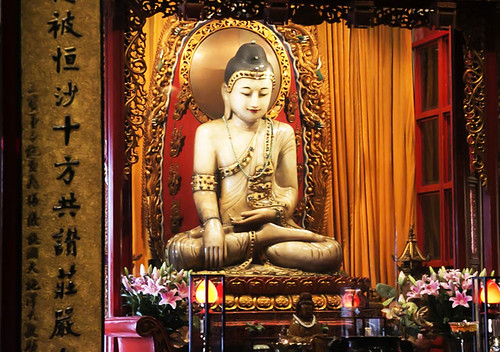 The temple is famous for its two jade Buddha states. From chinadiscovery.com 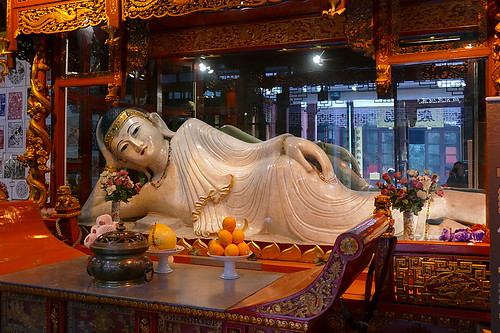 Since welding inside the sacred building is not allowed, the structure has been stabilized with steel beams held in place with screws. The famous Buddha statue, along with numerous other carvings and sculptures, are also protected by lengths of timber wrapped with fireproof cloth to “ensuring the dignity of the Buddhas.” (ShanghaiDaily.com)

Workers on the project have been instructed to be respectful of the temple’s Buddhist rules, Shen observed: they may not consume meat or fish, or smoke while working on the temple premises, and noise and dust must be minimized as other parts of the temple complex remain open to the public. Monks hold a blessing ceremony for the relocation of the main hall. Photo by Ren Long. From ecns.com

The Xuanzang Memorial: Evoking China and India’s Buddhist Past and Future
Lotus Tour of the Silk Road, 15–23 October 2016: Wuwei City Museum
The Making of Buddhist Wood Sculptures in China