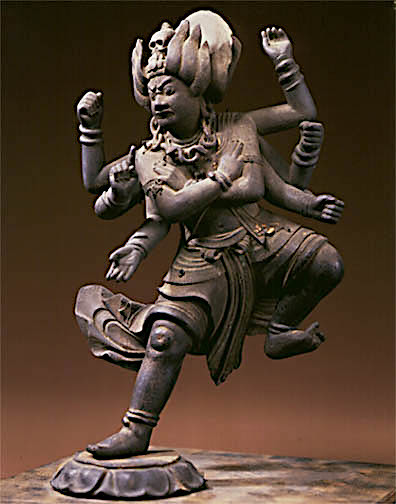 In the Buddhist esoteric pantheon, the specific wisdoms required to overcome obstacles to enlightenment—ignorance, jealousy, selfishness, greed, aggression—are embodied by five wisdom buddhas (Jpn: godai nyorai) who emanate from the primordial buddha Mahavairocana (Jpn: Dainichi nyorai). These wisdom buddhas are each associated with a cardinal direction in relation to Sumeru, the center of the Buddhist cosmos: Mahavairocana with the apex or center, Akshobhya (Jpn: Ashuku) with the East, Ratnasambhava (Jpn: Hо̄shо̄ or Hо̄jо̄) with the South, Amitabha (Jpn: Amida) with the West, and Amoghasiddhi (Jpn: Fukūjо̄ju) with the North. According to the Diamond Peak Sutra, the wisdom buddhas manifest into three wheel bodies (Jpn: sanrinshin), which each fulfill a role connected to the Buddhist law. The buddha and bodhisattva bodies represent preaching and compassion respectively, whereas the wrathful body demonstrates subjugation of wayward thought and quelling of obstacles.

The identity of the wrathful body progressed through several iterations, including the Five Great-power Bodhisattvas (Jpn: godai riki bosatsu), by way of scriptural translations by scholar-monks in China—most prominently by Amoghavajra—and became what we know today as the Five Great Wisdom Kings (Jpn: godai myо̄о̄). Their likenesses were transmitted by way of diagrammatic drawings (Jpn: zuzо̄) and mandalas (Jpn: mandara) to Japan by Kūkai and Saichо̄ in the early 9th century. They were collectively implored for the protection of the nation and individually petitioned for their assistance against specific distractions from a devout Buddhist lifestyle. 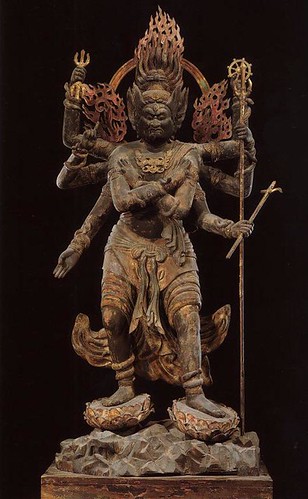 Gundari myо̄о̄ (Skt: Kundali Vidyaraja) is one of the “lesser-known” wisdom kings. His popularity in Japan is largely due to his inclusion within the godai myо̄о̄ grouping, rather than the development of an independent cult, as with Fudо̄ myо̄о̄. As the wrathful manifestation of Hо̄shо̄ nyorai, Gundari is associated with the south and is responsible for the protection and distribution of the nectar of immortality (Skt: amrita). He is often depicted with three eyes and flame-like hair. Of his eight arms, two are crossed on his chest in a mudra; the rest hold implements of war and of Buddhist devotion. His headdress is adorned with a human skull, sometimes multiple, while his armlets, anklets, and occasionally other decorum take the form of snakes.

While Gundari’s connection with amrita seems to clash with the snake imagery—the latter being creatures typically affiliated with poison and death—it is in fact steeped in Hindu and Buddhist mythology. The nagas were a race of serpentine humanoids who could assume both fully human or fully snake forms; they were ruled by greater nagas known as nagaraja, meaning serpent or dragon kings. One of these, Vasuki, allowed himself to be used by the devas and asuras to encircle Mt. Mandar and dredge up amrita from the primordial ocean of milk. A byproduct of this event was the stirring up of a deadly poison which threatened the Earth with destruction. The Hindu deity Shiva drank this to save the world, and Vasuki, in a demonstration of solidarity, joined him. Moved by the serpent king’s gesture, Shiva invited him to adorn his neck; Vasuki acquiesced and encircled it thrice. Other stories have the nagas wrapping themselves around Shiva’s arms, legs, and neck, at his offering, to seek warmth during a period of unnatural cold. Many of the wrathful deities of esoteric Buddhism have origins as an emanation of Shiva; it is not improbable that Gundari is specifically espoused from this Shaivic form. 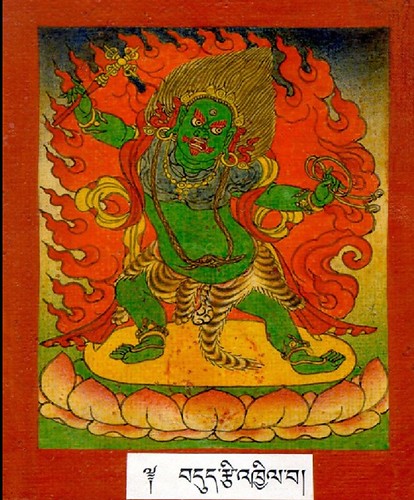 Green-skinned Amritakundali with snake motifs around his wrists
and ankles. From himalayanart.org

In the tantric schools of Tibetan Buddhism, the snake motif is often utilized in conjunction with human skull imagery in the girdles, armlets, wristlets, anklets, and headdresses of deities to represent the passage of time and the cycles of human life. Depictions of the wrathful deity Amritakundali show him with green skin and wearing snake-shaped finery. This form is one of a few which travelled to China and is incorporated into the Two World mandalas (Jpn: Ryо̄kai mandara).

Kūkai lists two texts among those he brought to Japan from China which deal specifically with Gundari: the Kanro Gundari yuge nenju hо̄ (Yogic Meditation Method for Sweet Kundali) and the Bonji senpi kanro Gundari shingon (Sanskrit Mantras for Thousand-Armed Sweet Kundali). It should be noted that Kanro Gundari is just one form of the deity as a fearsome manifestation of Kokūzо̄ bosatsu (Skt: Akashagarbha); the others, Kongо̄ Gundari, a manifestation of Kannon (Skt: Avalokiteshvara) and Renge Gundari, of Kongо̄satta (Skt: Vajrasattva), appear in other sectors of esoteric mandalas. The two texts informed, in part, the rites of Gundari as they were performed during the Latter Seven Days Rite (Jpn: Goshichinichi no mishihо̄) at the Shingon-in (a small temple within the Imperial complex) by abbots of the Tо̄-ji for peace in the imperial household, the protection of the nation, and blessings on future crops. The rite of Gundari was intended to ward off interruptions and was usually done at night. Offerings were made to the deity twice on the first evening and twice every day between the ninth and 14th days of the first month. It is no surprise, then, that one of the earliest sculptural examples of Gundari myо̄о̄ can be seen in the Tо̄-ji with the other members of the godai myо̄о̄.