Tenku Ruff, Osho, is a Soto Zen priest trained in Japan and the United States, and a professional chaplain with a Master of Divinity degree from Maitripa College in Portland Oregon. She is the president of the Soto Zen Buddhist Association (SZBA), which recently held its semi-annual conference at Zen Mountain Monastery in New York State. Buddhistdoor Global sat down with Ven. Ruff to learn more about her path and the state of Soto Zen in North America today.

Buddhistdoor Global: Can you tell me about your background with Buddhism and your journey to becoming president of the SZBA?

Tenku Ruff: I began practicing Zen Buddhism in Japan in the mid-1990s when I was living in Oita Prefecture and working as a high-school English teacher. I wanted to try an intensive silent retreat, or sesshin. It just happened that there was a tiny Soto Zen temple in the mountains not far from my home led by an American abbot, Paul Tesshin Silverman. At that time, Tesshin Osho was the only non-Japanese abbot of a Zen temple in Japan. After the first sesshin, I continued to participate in as many as I could until my teaching contract ended in 1999. By that time, I had decided to ordain as a Zen monk, but Paul was returning to the US and told me to find another teacher.

After leaving Japan, I spent a year in Asia practicing in temples and monasteries and traveling, then five years in residence in American temples and monasteries as a layperson. I had hoped to find a teacher who was both a woman and an English-speaker, but in 2005 I found myself back in Japan happily being measured for robes by Tessai Yamamoto Roshi, Tesshin Osho’s Dharma brother.

I trained for the next five years in Japanese temples and monasteries, going back and forth between the US and Japan. Ours is a koan tradition, so I worked my way through the Zen koans with my teacher while also spending compulsory training time in the Soto Zen training monastery.

After returning to the US in 2010, I completed a Master of Divinity degree at Maitripa College in Portland, Oregon and spent a year as a chaplain resident at Providence Portland Medical Center.

At the end of my residency in the hospital, I decided to honor the many people who had died in the hospital and in the 2011 tsunami in Japan by undertaking the Shikoku 88-temple pilgrimage, a 1,100 km route following in the footsteps of the ninth century Shingon monk Kukai, or Kobo Daishi.

Soon thereafter, I was invited to join the SZBA board. Initially I said I would do it but wasn’t selected. When I was asked again, I felt I had to say no, as my work as a chaplain and my commitment to my Zen group had become very busy. However, in Zen we have a custom of being obligated to say yes after three asks, so I joined the board in 2014 and was later asked to be the board president. 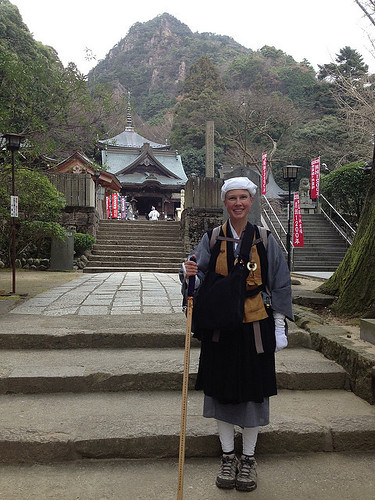 BDG: The SZBA is still a relatively young organization. What are your hopes for its future?

TR: In its initial stages the SZBA was focused primarily on organization building. The SZBA had to declare as a nonprofit, create bylaws, set a code of ethics, and decide on common minimum standards for membership. Some people wanted the SZBA to be nothing more than a group of like-minded priests and others wanted it to function more as a professional organization. The organization naturally moved toward more professionalism as it grew in size and continues along those lines today.

Six weeks prior to my selection as board president in November 2017, the SZBA passed the SZBA Standards for Membership, by a significant margin and with a large majority of the membership participating in the polling. We held a board retreat in April of 2018 and set three initiatives for the coming years:

2. Education and connection outside of biennial conferences, particularly in support of associate members.

3. Clarifying the role of Soto Zen lay teachers in relation to the SZBA.

My dream is for people on the street to see a Soto Zen priest, recognize them as such, and feel a sense of relief and comfort in knowing what they represent. Members may have different ideas for how to achieve this dream, but we are united by our common vows and commitment to the Dharma.

At this time, the SZBA has no plans to venture beyond North America, although we do have members in Europe, Asia, and South America. My hope is that we can offer what we’ve learned building the organization to others who want to build similar organizations in their own regions. Of course the Dharma manifests in different ways in different parts of the world, so what works for priests in North America may not necessarily work for priests in other parts of the world. BDG: Speaking of the SZBA, you recently held your annual meeting in New York. What were some highlights?

TR: The theme of the 2018 SZBA conference was Interconnecting: One Soto Zen, Many Expressions. This conference represented a significant shift in North American Soto Zen Buddhism. Though we do not know the exact numbers, I estimate that the SZBA is around 95 per cent white—a percentage far out of line with national demographics. We also know that younger women are underrepresented (20 per cent) among full SZBA members. We don’t know the reasons for these things, but our hope is to begin a process of learning and action.

We began the conference with a Land Acknowledgement statement recognizing and honoring the indigenous people on whose unceded land we met. Seventy-two priests attended, supported by Zen Mountain Monastery residents and staff.

At each SZBA conference, we hold a Dharma Heritage Ceremony in which current full members welcome new members to the organization. New members are priests who have demonstrated fulfillment of the SZBA Membership Standards. This year, following the Dharma Heritage Ceremony welcoming 15 new members, Ejo McMullen of Buddha Eye Temple in Eugene, Oregon, read a proclamation of recognition and repentance on behalf of the SZBA. Ejo then replaced the proclamation on the altar and the entire assembly immediately began our monthly Full Moon Ceremony of repentance and renewal of our priest vows. This is how we closed the conference.

Buddha Eye Temple plans to hang the hand-copied proclamation at their temple entrance and the San Francisco Zen Center wants to institute a yearly ceremony around the proclamation.

One highlight of the conference were discussions around the theme of #MeToo. These discussions were ground-shaking for us as a community. The women’s discussion opened a deep well of pain, which we held together in council process, listening to stories about our sisters that broke our hearts. Men also reported being shaken to their core. One told me he had never been in such vulnerable and open discussion with other male priests. It was difficult to know what to do with the energy unearthed by these discussions, but people expressed a commitment to continue the work we began. Several men have already formed a committee to do so and the professional facilitator we used for the men’s discussion will remain involved.

Finally, this year we introduced a one-day pre-conference meeting for SZBA members aged 55 and under. At the 2016 SZBA Conference, younger priests met for a discussion over lunch. Although time was limited and the discussion was just getting started when we had to move to the next event, many people reported this lunch as the highlight of their entire conference. Someone raised the idea of a one-day meeting prior to the 2018 general conference and this year’s meeting was the result of that request. Twenty-one priests spent an intimate, casual day together in discussion about temple and leadership succession, offering and receiving emotional/mental support in our role as priests, and we used council process to discuss challenges we are currently facing in our practice on a deep level. BDG:  Can you tell me more about the impact the keynote address by Dr. Ann Gleig had on members?

TR: Many priests, particularly those who are younger and/or practice in urban temples, have done significant work on privilege, diversity, equity, and inclusion. Others have not and some were skeptical. I didn’t get the impression there was animosity toward the ideas Dr. Gleig presented, but there was a sense of surprise and perhaps even shock. I don’t think many people realized how bad the situation is and how much our actions, or lack thereof, cause harm. Ann helped us connect that though the lens of the Buddha’s teachings. Seeing the topic of whiteness presented as Dharma—because how we work with it is Dharma—alleviated some of the mistaken view that this is simply a social or political issue.

After the panel discussion that was a follow-up to Ann’s talk, I witnessed a large, older white male priest racked with sobs and being held gently by two other older white men. I don’t know why he cried, but I was touched that he did, that he was able to do so, and that others were there to comfort and hold him in his sadness.

Safety and Vitality, Joy and Honor: Khalida Brohi and Jane Weintraub
Ngakma Mé-tsal Wangmo – A Vicar of Vajrayana
Gender as an Act: Sarah Wessendorf on Buddhism and Non-binary Identities