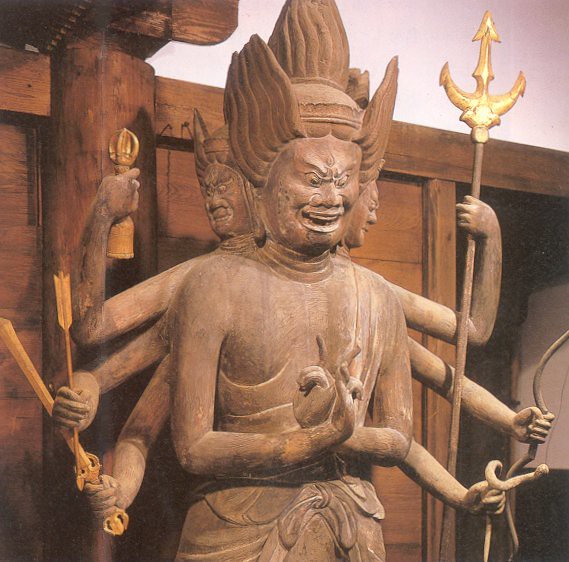 Gozanze (Skt: Trailokyavijaya; “Victor of the Three Realms”) belongs to the class of deities known as myо̄о̄ (Skt: vidyaraja; “Wisdom King” or “King of Light”), who serve as the protectors and enforcers of the buddhas and their attendant bodhisattvas. With wrathful faces and fearsome weapons, they dominate the evil that threatens Buddhist tranquility, while simultaneously constraining those who would wander from the Buddhist path. As one of the Five Great Wisdom Kings (Jp: godai myо̄о̄), Gozanze is the wrathful form of the tathagata (Jp: nyorai; “Wisdom Buddha”) Akshobhya (Jp: Ashuku), ruler of the Eastern Pure Land, and is thus himself associated with the East. Gozanze is traditionally depicted with four faces, eight arms holding a selection of weapons, and two legs crushing a figure or figures beneath his feet.

The English interpretation of Gozanze’s name and the inclusion of a bow among his weapons suggest that the Buddhist deity was derived from the Hindu god Tripurantaka. The latter was a manifestation of Shiva, who conquered three demon cities with a single arrow. Tripurantaka’s formidable power made him a simple choice for assimilation into the Buddhist pantheon, under a different name, by the author-monks at Nalanda as they composed the Mahavairocanabhisambodhi sutra (Jp: Daibirushana jо̄butsu jinben kajikyо̄; The Discourse on the Enlightenment of Mahavairocana).

In the Mahavairocana sutra (Jp: Dainichi-kyо̄), as translated by Yixing (Jp: Ichigyо̄; 683–727) and Subhakarasimha (Jp: Zenmui; 637–735) in 724, three wisdom kings are mentioned by name: Hayagriva (Jp: Batо̄ myо̄о̄), Acalanatha (Jp: Fudо̄ myо̄о̄), and Trailokyavijaya. The latter two are new inclusions, whereas Hayagriva has precedent in earlier scriptures. When the sutra is transposed as a mandala, Trailokyavijaya specifically is designated as the protector of its borders, this in addition to his latent talents assigned by his wrathful class—the dispelling of obstacles to enlightenment and the purification of body and mind.

A Chinese translation of the Sarvatathagatatattvasamgraha sutra (Jp: Issainyorai shinjitsushо̄ daijо̄genshо̄zanmai daikyо̄о̄gyо̄; Compendium of Principles of All the Tathagatas), initiated in 723 by Amoghavajra (Jp: Fukū; 705–74) and completed in the early 11th century by Danapala (Jp: Sego; a. 980), is credited as a significant text in establishing the roles of the tathagatas within the esoteric pantheon and their respective manifestations into wrathful forms. Scholars believe the text was originally written during a particularly contentious period between Hindu and Buddhist tantric sects, as a prominent portion in the second section of the sutra deals with the subjugation of Mahesvara (Jp: Daijizaiten)—an epithet, in this case, for Shiva—by Vajrapani (Jp: Kongо̄shu bosatsu). Vajrapani, under orders from the cosmological Mahavairocana Buddha (Jp: Dainichi), assumed his wrathful form of Trailokyavijaya and conquered all the worldly deities in the universe. He then gathered them on Mt. Sumeru to abide by the Three Jewels. All submitted, save for Mahesvara. Through the recitation of a mantra, the wrathful Vajrapani destroyed the indignant Mahesvara and caused him to be reborn as a being who would eventually achieve buddhahood, thus fulfilling Vajrapani’s assignment. 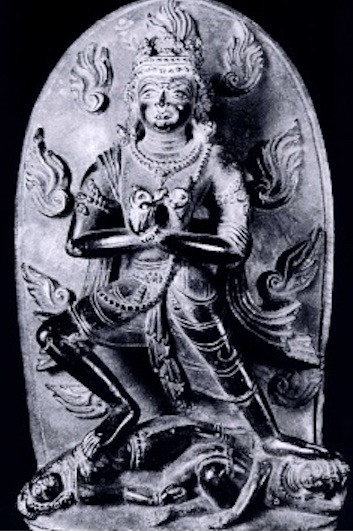 In the Buddhist visual culture of South Asia, Trailokyavijaya is traditionally presented as the vehicle of Mahesvara’s humiliation and death. Scriptures describe the Trailokyavijaya of this moment as having four faces showing wrathful passion, rage, disgust, and heroism, eight arms holding an array of weapons and esoteric implements, and two legs under which are crushed Mahesvara alone or with his consort Uma. Trailokyavijaya’s skin is blue and the foremost pair of arms cross and the hands contort to form the Trailokyavijaya mudra, representing the subjugation of threats to the tathagatas and the entirety of the Buddhist cosmos. His legs, the left slightly and the right dynamically bent at the knee in the pratyalida configuration, are a physical expression of the destructive and abhorrent emotions the deity would have felt toward the indignant Mahesvara. Extant examples, complete or fragmentary, of this type, which predate the 10th century, are rare in India; the most notable can be found in India at Nalanda, Bodh Gaya, Jethian, and Orissa. Post-10th century depictions of Trailokyavijaya in this pose are more common in the art of Tibet and Nepal than in India; an outcome, perhaps, of the waning Indian interest in Buddhist teachings around that time.

The thematic and visual association with the trampling of Hindu deities would accompany Trailokyavijaya as his iconography traveled by way of scriptural translations and secret esoteric initiations to the Chinese monks Daosui (Jp: Dо̄zui; d.u.) and Xingman (Jp: Gyо̄man; d.u.) at Guoqingsi on Mount Tiantai and Huiguo (Jp: Keika; 746–805) at Qinglongsi. The Japanese Tendai patriarch Saichо̄ (767–822) would receive esoteric training from Daosui and Xingman, and the Shingon patriarch Kūkai (774–835) from Huiguo. Both would return to Japan in the early ninth century with copies of the sutras, commentaries, and diagrammatic drawings, as well as Buddhist mandalas, among them the Taizо̄kai (Skt: Garbhadhatu; “Womb World”) and Kongо̄kai (Skt: Vajradhatu; “Diamond World”). 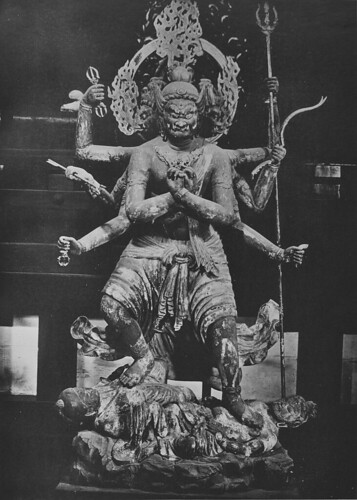 Once the chief of the Five Great Wisdom Kings but ultimately supplanted by Fudо̄, Gozanze was assigned an assembly (Jp: Gozanze e) in the middle right section of the Kongо̄kai mandara. If meditated upon in an ascending, counterclockwise rotation from the bottom right, the Gozanze e provided a devotee the necessary rite to prepare their mind for further contemplation of the Diamond World. Gozanze is never depicted as an independent deity in sculpture or in painting, rather only as part of the Godai Myо̄о̄ or in a retinue of esoteric deities. He is a mainstay on the Womb and Diamond World mandalas, but also holds a prominent position on the Sonshо̄ and Nin’no gyо̄ mandalas. When Kūkai was assigned to the Tо̄-ji in 823 by Emperor Saga (r. 809–23), he commissioned a sculptural representation of the Nin’no gyо̄ mandara. There, visitors can see a large sculpture of Gozanze Myо̄о̄ in all his fearsome magnificence, treading upon Hindu deities in a wrathful demonstration of the power of the buddhas.

Highlights of Buddhist Art at the Norton Simon Museum
What are these Statues for?
Beyond Gender: Seeking the Sublime in Sacred Art