Geshe Lhundup at the Stupa of Enlightenment in the village of Plana, Bulgaria. Image courtesy of Geshe Lhundup

Buddhism spread to Bulgaria in the early 1990s, following the collapse of communism and a visit by His Holiness the Dalai Lama in 1991. Since then, communities of several Tibetan Buddhist traditions have been established in Bulgaria, some of which have survived until today. One of those communities is the Bon-Dzogchen Sangha Bulgaria, which follows the Bon Buddhist tradition—recognized by the Dalai Lama as the fifth school of Tibetan Buddhism. We can distinguish three strands of the Bon tradition: old Bon (closely related to shamanism), Yungdrung (eternal Bon), and New Bon (reformed Bon).

The Bon-Dzogchen Sangha in Bulgaria is guided by the famous Bon master Geshe Tenzin Wangyal Rinpoche. His disciple, Geshe Khorden Lhundup Gyaltsen, visited Sofia in 2015, 2016, and 2017 to give teachings on Tibetan yoga, Dzogchen, and Phowa (related to the transfer of consciousness during death). In April, during his third visit, I had an opportunity to interview Geshe Lhundup and discuss with him different aspects of the development of Buddhism in the West.

Geshe Lhundup was born in 1976, in the village of Damranji, in the traditional Kham region of eastern Tibet. When he was about 12 years old he decided to become a monk and went to Patsang Monastery of the Yungdrung Bon tradition. In 1993, he escaped Tibet for Nepal, where he met Yongdzin Tenzin Namdak Rinpoche in Kathmandu, who was at that time the most senior teacher in the Bon tradition. Rinpoche encouraged him to go to Menri Monastery in India to study for a Geshe degree (an academic degree for monastics equivalent to a doctorate in Buddhist philosophy in the Gelug, Sakya, and Bon schools). 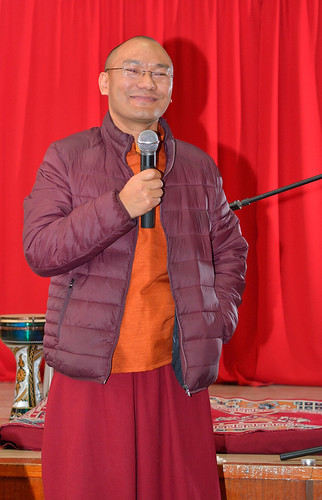 Menri Monastery was first established in Tibet in 1405 by Nyammey Sherab Gyeltsen (1356–1416) and quickly became the main monastery of the Bon tradition. Menri, means “Medicine Mountain,” and is derived from the belief that the surrounding mountains are home to hundreds of species of medicinal plants and springs. The Indian branch of the monastery is located in Dolanji, in the Solan District of Himachal Prades, and has more than 350 residents. It is comprised of various Tibetan-style buildings, including temples, a library, a Bon dialectic school, dormitories, a health center, and a nunnery. The head lama of Menri Monastery is His Holiness Lungtok Tenpai Nyima, the 33rd Menri Trizin, who is recognized worldwide as the spiritual leader of the Bon tradition.

Geshe Lhundup studied at Menri Monastery from 1993–2009, completing courses on sutra, tantra, and Dzogchen, as well as Tibetan grammar, poetry, astrology, medicine, mandala painting, yoga, and meditation. After 15 years of intensive study, he received his Geshe degree then traveled to Dharamsala to study English. In 2010, he moved to France at the request of Geshe Tenzin Wangyal Rinpoche to support his students there. Until 2017, Geshe Lhundup was the resident lama of Ligmincha France, a branch of Ligmincha International—a worldwide network of Bon centers founded by Tenzin Wangyal Rinpoche. The aim of Ligmincha International is to preserve the ancient teachings, transmissions, and practices of the Bon Buddhist tradition, and to introduce them to the Western world in an authentic manner. They aim to do this in such a way that these teachings, transmissions, and practices remain beneficial when integrated into modern Western culture. Dzogchen teachings of Geshe Lhundup in Sofia, Bulgaria. Image courtesy of the author

My first question to Geshe Lhundup was related to his impressions of Dharma practitioners in the West. In his answer, he pointed out two very important challenges for practitioners: “I feel that people in the West are very open to the spiritual path and emphasize scientific research. Some of them are very serious practitioners and they practice every day. I noticed two different types of obstacles: one is expectations and the other is doubt. Many European practitioners want immediate change in their lives. In this way they create expectations that close their door to the Dharma. The other obstacle, doubt, is related to the fact that many Westerners are very intelligent, they learn things by using their heads, but have less experience with the practice. They may think too much about whether what they do is right or wrong, which destroys the result of the Dharma practice.”

Geshe Lhundup has witnessed many positive changes among his Western students after they have connected with the Dharma. The practice that helped him to change his inner self most profoundly is Dzogchen meditation. Regarding meditation, he advises that quality is more important than quantity and length of the practice. Geshe Lhundup, left, with María Gueorguieva, center, who leads the practice of the Bon-Dzogchen Sangha Bulgaria, with the author, right, during a seminar on Himalayan Buddhism at Sofia University. Image courtesy of Dechko Stefanov

In my next question, I sought Geshe Lhundup’s advice on how to cope with the strongest negative human emotion—attachment—and how one can find a balance between Dharma practice and the emotional bonds of relationships. His response addressed the traditional approach of the middle way: “It is hard to live our lives alone, and sometimes it is also hard to live with someone. We need to find a middle way, which means that even if you stay with someone, no matter if he or she is practitioner or not, you need to keep your own space. If you really know how to practice the Dharma, no one can disturb you. Actually, the Dharma is not something that we show physically on the outside, instead it is a method for dealing with your own negative thoughts and emotions in everyday life. If you have problems even after years of Buddhist training, this shows that you still have an imbalance between your emotions and your practice.”

My final question was related to Geshe Lhundup’s understanding of the essence of the Buddhist path. His simple and yet profound answer revealed the indivisibility of compassion and meditation: “As individuals we have free choice. The essence of the Dharma is to develop peace and harmony at the level of the individual. Starting with inner transformation, you can continue to help transform your family, your society, and your country. Gradually, maybe you will be able to bring peace to the whole world, through the power of wisdom and compassion. Compassion brings peace to others and meditation brings peace to us. For me these two—compassion and meditation—are the essence of Buddhism.”