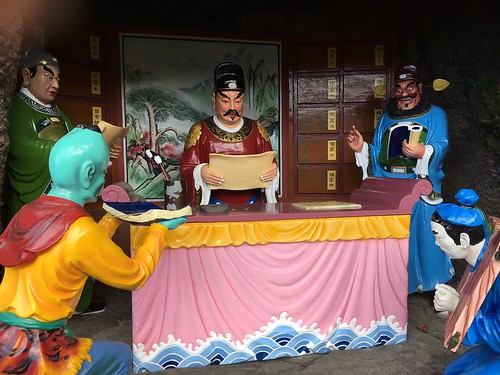 A Chinese administrator examining a scroll, while a prisoner kneels at his feet.
Image courtesy of author

I stood in front of a life-sized plaster statue of a Chinese administrator. He was examining a scroll at his desk, while fellow administrators hovered on either side of him. Kneeling at his feet was a prisoner shackled and bound, looking terrified. This was the first chamber of hell—a kind of sorting station to determine who goes where.

I followed the trail along the beautiful Malaysian mountainside, which framed the hell garden, and soon came upon the next chamber, where a terrified prisoner was being dragged toward his jailers. Their tongues were hanging out of their mouths, looking wild and dangerous, and their whips were at the ready. If I understood correctly, this prisoner was being led to a place reserved for adulterers, kidnappers, suicide committers, and squatters—crimes of apparently equal weight.

Next were people being dunked up to their necks in what looked like a bowl of blood. Guardian ogres stood over them with long weapons. A few plaster faces were peaking out between the gaps in the wall, watching with horror at the scene below them. Then came a scene in which a naked woman was being sliced through her abdomen while a man was having his eye carefully gauged out. And the scene after that showed a woman being pounded to a pulp. 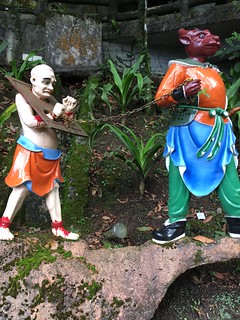 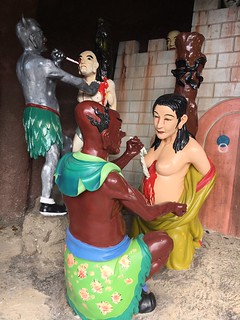 Left: a man is dragged away by an ogre, and right: a man and a women are
punished for their sins. Images courtesy of author

I have visited hell gardens before and I must admit that I am fascinated by the phenomenon. There is something playful in the shock value of it all. Families stroll by the images and are duly horrified with embarrassed giggles at all the gruesome sights. Part of the purpose must be to entertain and enthrall, but I suspect the more significant objective is to get stomachs churning, and this one certainly succeeded with me. By the time I had finished the tour, having examined each of the ten hell chambers carefully, I was nauseous. I took a few minutes to sit on a bench by the edge of the mountain to clear my head.

Of course, the bench was strategically placed. Visitors are properly traumatised by the visions of what you will face if you choose the wrong path, and are then offered a beautiful landscape for a moment of contemplation immediately thereafter. When I looked up, I realized I was sitting at Kuan Yin’s feet. I was so disturbed by the hell realms, I had not noticed her statue.

Good architecture is about more than creating a functional space. It is also about telling a story, and the architecture of this temple park was explicit: follow the walkway, consider hell carefully, and then keep walking until you find the road that takes you far away from that.

And it worked. I was relieved to find Kuan Yin’s compassionate face above me after having spent so much time examining the horrors of the Buddhist imagination. But I kept wondering about the developers of this project: despite my attraction to these kinds of theme parks, why would anyone actually want to build one? Of course, I can appreciate the argument being made—be a good Buddhist or you will meet your doom—and hell gardens obviously attract a significant clientele, but at the end of the day, I could not help but wonder at it all. Did the developers really have nothing else they would have preferred to create instead? 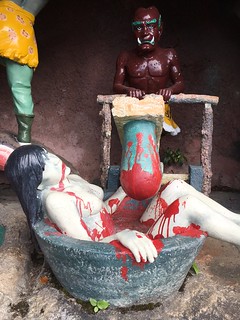 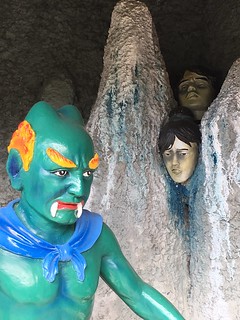 LeftL a woman being pounded to a pulp, and right: worried faces look on at the
violence below. Images courtesy of author

The other question I kept asking myself during that visit was about the role hell realms play in religious imaginations—a question not reserved exclusively for Buddhists, since most religions have hell realms to match.

On the one hand, imagining hell realms is not difficult for many of us. Human beings have pummeled, chopped, butchered, drowned, and set each other on fire more times than any of us really wants to think about. Every scene I walked past was a scene that I knew had occurred in real life—somewhere, sometime, now. We don’t have to go far to imagine these things at all. Perhaps that is part of what makes the depictions so upsetting. 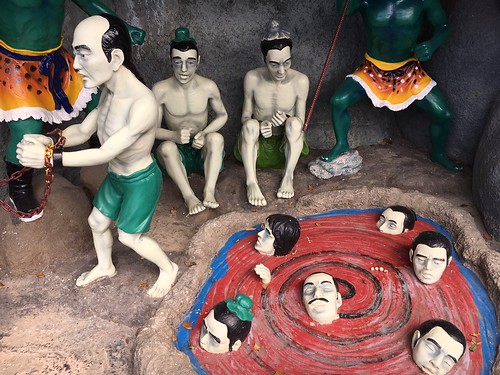 People drowning in a pool of blood. Image courtesy of author

I am certain the intention of a hell garden is not to provide viewers with legislative ideas. Hell gardens are like giant roadside warnings; they are not suggestions of how to treat each other now. But one idea begets the other and fear is the bottom line. Hell gardens ultimately serve to scare the wits out of its audience (Michaelangelo probably had something similar in mind with the Sistine Chapel). And fear is an ugly tactic no matter what the purpose.

Fear is what put Donald Trump into the White House. It is what gives power to the white supremacists to raise their voices and their flags. It is what allows the North Korean government to impose dark isolation over its citizens. If the only way of reaching people is by scaring them to death (or to the afterlife!), then . . . what? A feeling of hopelessness about the human condition? A shrugging of the shoulders as we make reference to the inevitability of samsara and quit? Can we really not do better than that?

Imagining hell realms might be an inevitable feature of the human condition, and I am sure there are arguments to defend the idea of the practice, but at the moment—with the world spiralling into narratives of fear in all directions—I have lost some of my appetite. There is more than enough gore and fear to go around, so maybe we don’t need to add more. 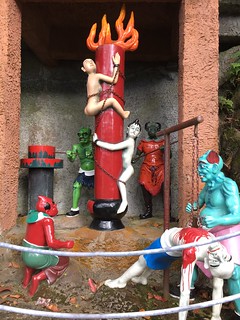 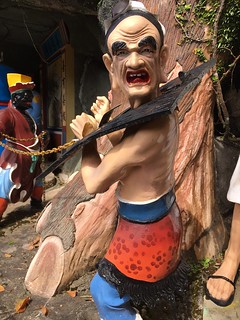 Left: people being punished, and right: a man being dragged away, probably to
face his punishment. Images courtesy of author