Each evening, I make a cup of tea and sit out on the small balcony in front of my San Francisco apartment and try to experience a few moments of the open awareness so familiar on Buddhist retreats. Although it is not quite as serene as a retreat center, there are just enough trees and birds and squirrels to allow me to let go of the urban hubbub which churns up my mind during the workday. After the sun sets, I settle into my chair, a large, half-reclining one, which takes up about 75 per cent of the little deck. My evening reflective time is precious to me, and I feel quite snugly held in the tight space.

This is the place where I process the experiences of my life. It is also here that I began reading The Wisdom of Not-Knowing: essays on Psychotherapy, Buddhism and life experience. With 30 years of footprints left behind me on the Buddhist path, many Buddhist concepts, such as the state of “not-knowing,” have popped into my head as I try to make sense of my life. But it was only after I realized my marriage must end that a deep curiosity arose about the state of not-knowing and how quickly I try to move out of that experience.

The Wisdom of Not-Knowing approaches the topic from a number of viewpoints. We find our way in through the reflections of Buddhists and non-Buddhists, therapists and clients, activists and those who seek higher consciousness through the natural world. What I found most exceptional about this collection of essays was the personal stories and experiences of those who have tried to come to grips with the same discomfort I have felt in periods of not knowing.

For those of us who appreciate the mystical side of experience, Jason P. Ranek’s contribution highlights the front and back of our ego structure when we come into contact with the unknown. There are many references from the Buddha himself through quotes from the Buddhist canon. However, such disparate people as Emily Brontë, Donald Rumsfeld, and an ayahuasca shaman are also mentioned in the essay, opening up unexpected avenues into the topic.

As a layperson, I am not familiar with many of the therapists whose models and theories are quoted in the book, but their presence does not dominate the discussion. In fact, I was pleased that the language of psychotherapy was spoken in a couple of the essays, such as Rosemary Lodge’s “Sometimes We Don’t Know What We Know: The Importance of Emotional or Hidden Knowledge,” which calls on therapists to reflect on their own willingness for emotional connection in therapy in order to better facilitate a client’s own self-discovery.

We hear more on false certainty in Bob Chisholm’s work, “Known Unknowns.” “Although the known knowns in one’s life may give a sense of stability, they may also become fixations that block a fuller awareness. They may not actually be false, but they can still mislead one into believing that they are the only things that matter.”

My own “known known” for 20 years was that all I needed was an intensity of Self-power practice which would surely enable me to break through illusion into Enlightenment. However, as the years rolled on, I seemed to have cleaned up the more trivial areas of my psyche, and what remained was a much harder nut to crack. My vajra no longer cut through my illusions so easily. In fact, it became quite blunt and even useless as I was overwhelmed with emotional traumas past and present. Commenting on a Zen koan, Manu Bazzano captures the spirit of my transition from arrogant know-it-all to surrendering-to-Other power fool in his essay “Planting an Oak in a Flowerpot.” “Not-knowing is nearest: one arrives at this kind of not-knowing having travelled far and wide, having left no stone unturned. It is a profound admission of defeat—a defeat which might well be our only hope for it preludes the abdication of the notion of a Promethean, self-sufficient identity, of one’s valiantly delusional dreams of conquest in a yet-to-be-colonised wilderness.”

The Wisdom of Not-Knowing came into my life at a time of dramatic personal transition. I am grateful for this volume as it has fueled a deeper inquiry into my own relationship with not-knowing. I have appreciated turning the concepts, suggestions, and personal stories over in my mind. Now, though, it is time to make a cup of tea, take my seat outside, recite “Amitabha Buddha Refuge” and simply not-know. 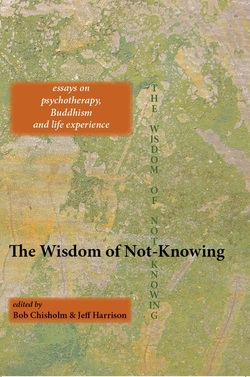 The Wisdom of Not-Knowing, Essays on Psychotherapy, Buddhism and Life Experience, edited by Bob Chisholm and Jeff Harrison, was published by Triarchy Press, Devon, in 2016.

John Del Bagno is a gerontologist, artist, and battered practitioner of the Buddhist Way. He was ordained in the Triratna Buddhist Order for 17 years and transitioned into the Pure Land Way following several pilgrimages in Japan. He is now part of the Shandao lineage of Pure Land Buddhism founded by Master Huijing of Taiwan.