The sangha behind the festival. Photo by Pawo Choyning Dorji

Thus have I heard:

At one time, many centuries after the Buddha attained enlightenment, a multitude of leading monks, nuns, laypersons, and bystanders from the continent of Jambudvipa, now called India, gathered in the season of falling leaves under the shade of the Bodhi tree, at the place of his enlightenment, to celebrate the greatest son of Jambudvipa that ever lived.

It was November, in the year 2559 of the Buddhist Era, recorded in the Gregorian calendar as 2016 CE, in the place called Bodh Gaya. At that time, the heavens rained down a shower of flowers each day: a carpet of golden marigolds on the first, a pathway of white lilies on the second, and it was roses, red roses all the way, on the third day of the great Siddhartha Festival. There were bodhisattvas and mahasattvas, dragon kings (and queens), kinnaras, gandharvas, dakinis and apsaras, along with senior officers of the state, students, professors, and professionals. Not all attendees at the gathering could see these celestial beings. Nevertheless, all those in the great assembly, having seen what they had never seen before, were filled with joy and, pressing their palms together, gazed at the Buddha with a single mind.

The dear ones from Deer Park, the noble ones from the Vana community, the Vana Foundation, which sponsors those aspiring to create a paradigm shift in people’s minds and in society, those drenched with the Dharma Rain sangha from Bombay, those with a firm foundation in the Khyentse lineage, senior beings from Antara, and the gandharvas and apsaras of the Pune sangha were all there as they made the eight auspicious offerings to the Tathagata in the traditional Indian manner. The renowned Bhutanese lama Dzongsar Khyentse Rinpoche was there and, in a voice clear and pure, he gently extolled the virtues of the Buddha. This was the cue for the gandharvas and apsaras from Pune to guide the assembly, led by Zubin Balsara, founder of the World Centre for Creative Learning Foundation, into a group recital of devotional songs.

Hindustani vocalists Namrata Mahabal and Jaydeep Vaidya took the assembly to celestial heights with their rendition of Shantideva's dedication from the Bodhicaryavatara, ending with a soaring recital of the names of Bodhisattva  Manjushri: “Manjugosh, Manjushree, Manjunath, Manjugosh.” On that last high note, many beings were seen having left their cushions, floating over the assembly, some with tears in their eyes. Enchanting recital by Deepa and sangha under the Bodhi tree. Photo by Winnie Alamsjah

There were animated conversations, even during tea breaks, songs praising the Buddha’s achievements, and prayers of aspiration echoing the Buddha’s own heartfelt wish when he encountered Buddha Dipankara as a bodhisattva:

O Buddha, O Tathagata, O Mahamuni, Just as how you care, and how many you inspire. How glorious and beautiful you are! May we also emulate and may we too actualize that.

On that first day, as the shadows lengthened at sunset and the lamps were lit, apsaras led by professional Kathak dancer Maneesha Abhay choreographed the auspicious eight offerings, mesmerizing the gathering with their rhythms and classical Kathak dance moves. At the end of the first day, the entire assembly was transported effortlessly to the site of a great feast. And after the feast for the body, there was presented a feast for the mind and heart: Qawwali and Langa music, and Dzongsar Khyentse Rinpoche’s latest film, Hema Hema: Sing Me a Song While I Wait. And while we waited for that song of the bardo state, a brilliant performance of shadow puppetry by playwright and director Vikramjeet Sinha.

The second day dawned with morning meditation led by the esteemed Czech monk Venerable Dhammadipa, followed by the Dedication Chanting of 21 Taras led by Raji Ramanan, a scholar of science and literature. After an offering was made to the Four Stages of the Buddha’s Life, Professor Mahesh Deokar, head of the Department of Pali and Buddhist Studies at the University of Pune, gave an illuminating talk on the place of enlightenment, Bodh Gaya, and the gathering were amazed to hear such wondrous things they had barely known before. 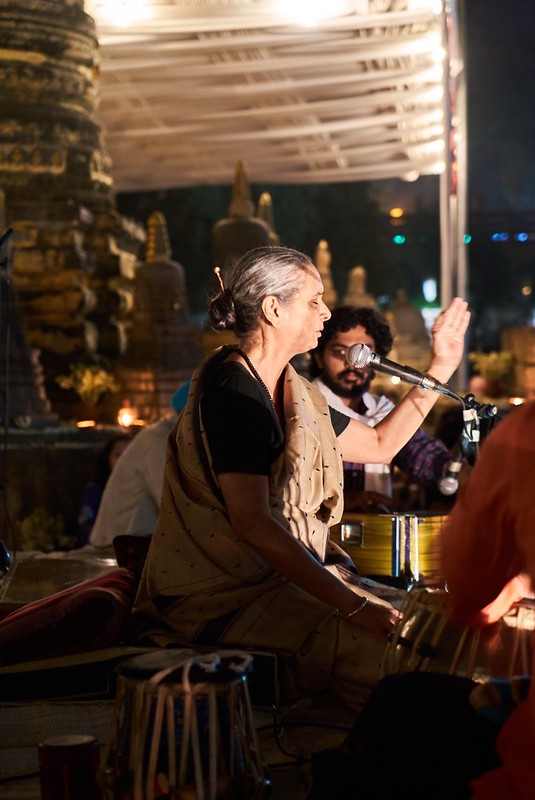 More discussions over chai with the revered teacher Venerable Sumati, and a talk by Suresh Bauddha, founder and president of the Youth Buddhist Society of India, on “Buddha: India’s Pride,” was followed by Venerable Sumati’s musings on the “Self-Forgetful, Imitative, Artificial” in Indian education, society, and culture.

Then followed group sessions of storytelling, relating the contributions made by great Indians to the spread the Buddhadharma—from Emperor Ashoka to Kumarajiva, the monk and translator from the Kingdom of Kucha, around the area now known as Kashmir. Then, more vocal music by the Hindustani classical singer Vidya Rao segued into dinner and post-dinner entertainment. Analjit Singh, founder and chairman emeritus of Max India, takes a short break to soak up the atmosphere as offerings to the Buddha are prepared for presentation. Image courtesy of Pema Choeden Namgyal Abrahams

The third morning began once more with meditation and the powerful Dedication Chanting of Samanthabhadra led by Deepa Thakur, a member of the 84000 project initiated by Dzongsar Khyentse Rinpoche.

Asha Pillai-Balsara, executive director of the World Centre for Creative Learning Foundation, gave a scintillating account of the story of the Bodhi tree—a story entwined with the history of Buddhism itself. And as she came to the part describing the agonizing dilemma of King Ashoka, who wanted to take a cutting from the sacred tree, without hurting it, the Bodhi tree over Asha’s head kindly dropped an overhanging branch at the feet of our gurus sitting at the front. The beings in the great assembly smiled and bowed their heads, marveling at this auspicious omen. In response to this gift from the universe, opera singer Annabelle von Arnim made her offering of two operatic arias in homage to Mother Nature.

After more gratitude was expressed to all beings and to the buddhas of all directions for this opportunity to celebrate this mighty son of Jambudvipa, this great assembly dispersed with promises to meet again.

As imagined and seen by Aspi Mistry. Aspi Mistry is a coordinator and founding member of the Dharma Rain Centre for Buddhist Studies in Bombay. A book and poetry lover, a practicing Buddhist interested in all spiritual traditions, and a Free Tibet and human rights activist, who likes to say, with apologies to Shantideva, “May I be a thorn in the sides of those who desperately need a thorn in their sides . . .”