A recent report by the Washington, DC-based Pew Research Center projects that some of the world’s major religions are going to expand, with the notable exception of Buddhism, whose following is forecast to decline over the next few decades.* You might find it confusing, then, that I’m going to name Buddhism the religion of the future when the Pew Research Center is predicting its decline.

Ultimately, there is not a single facet of Buddhist wisdom that science can disprove, from the notion of reincarnation to emptiness. Reincarnation as understood in Buddhism is quite different from that described by Hinduism. The Buddha taught that a personal self is nonexistent and that what migrates from life to life is pure consciousness. Since nothing goes completely extinct in the universe—it only changes form—our consciousness will continue to exist. In my understanding, there is no true science that can disprove the Buddhist theory of reincarnation. The truth is that most Buddhists don’t understand the true meaning of reincarnation taught by the Buddha; their understanding is unconsciously based on the transmigration of some kind of autonomous personal self. Modern neuroscience has also come to the conclusion that there is no personal self, which corresponds with the very fulcrum of Buddhist doctrine; no-self (Skt: anatman).

Buddhism has an astonishingly rich repertoire of teachings and practices for developing love and compassion toward all beings that can be applied universally, across time and cultures. Mindfulness is now fully embraced by people from all walks of life. Today, you will see schoolteachers, politicians, movie stars, police officers, and soldiers practicing mindfulness, even in the Western world, thanks to the tireless work of extraordinary teachers such as Jack Kornfield and many others. Its benefit has been validated by scientific trial, which is helping to make mindfulness more popular every day. Even some Christians and Hindus have embraced its universal appeal and undeniable power.

Other religions are predicted to grow, mainly in developing countries where education and economic development are assumed to lag behind for the foreseeable future. These cultures are not only holding onto their traditions firmly, they are also bearing more children for personal security, creating a new generation who will carry on their traditions and culture. As a society becomes prosperous and educated, its citizens generally become more scientific and secular. Contrary to the above Pew forecast, let’s say there is a possibility that the majority of the world is eventually going to enter the club of  “developed nations,” and will become increasingly modernized. Then, Buddhism can have a unique mission to serve the spiritual needs of many who might not relate to theistic traditions. That might be why Albert Einstein stated that Buddhism is the only religion that is compatible with modern science. I’m not saying that we should change Buddhism to fit modern science—such efforts can be dangerous and may dilute its depth. Instead, it’s a call to recognize that it is already intrinsically scientific. Nor am I trying to create a new marriage between modern science and Buddhism by promoting pseudo-science, such as the theory of intelligent design, a concept invented by some theists with specific intention.

Asian Buddhist monastics and teachers must awaken to this fact. Not only should they be focusing on meditation practice for themselves, they also should be teaching meditation practice to the lay community, such as the four foundations of mindfulness. They should teach the basic Buddhist doctrine of the Four Noble Truths to the general public in contemporary language so that lay people can gain wisdom about the human condition and deal with their own life’s challenges wisely. They should conduct meditation retreats in various environments and welcome everyone, regardless of their background, education, or economic status. Asia now has a large enough educated population who can understand the subtleties of the Buddha’s teachings and who will have the willingness to meditate rather than wanting to visit a temple to burn incense and pray for money and success.

S. N. Goenka is such an inspirational figure for all of us in this area. After studying mindfulness in Myanmar he moved to India to share what he had learned. Today there are hundreds of his Vipassana centers where everyone is welcome. While alive, he conducted 10-day Vipassana retreat at jails and prisons with amazing results. As long as we focus on meditation practice and interpreting Buddhism in contemporary language, it might continue to grow in the world as a force for peace, happiness, and wisdom. With these merits it possesses appeal for educated populations. 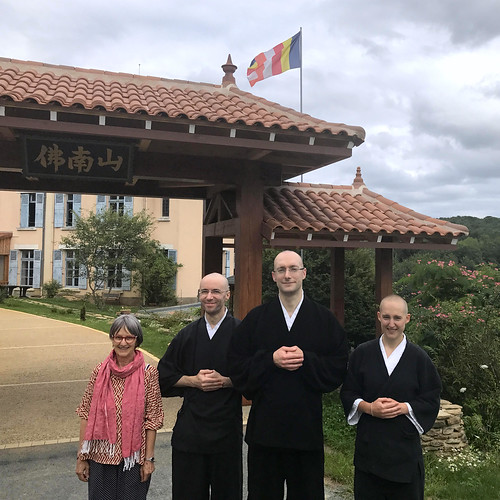 Teaching at a Zen monastery in France. Image courtesy of the author

It’s also good to look at why Buddhism is dying out in Japan and Korea. Once upon a time, these countries were veritable Dharma kingdoms. Buddhism underwent a heyday on the Korean Peninsula during the Silla dynasty (57 BCE–935 CE). Now, few young Koreans have any interest in practicing Buddhism; they are perhaps more interested in learning English or K-pop lyrics. Japan is also becoming increasingly secular and Buddhism there is rapidly dying. The cause of this development might be traced to the Meiji era (1868–1912), when the country tilted toward full-blown modernization. As I mentioned earlier, my solution for such a disconcerting situation might lay in two points: first, spreading the meditation movement into mainstream society and teaching the Dharma using contemporary language to meet the needs of people of our time. Many people these days are drawn toward Buddhist meditation because they can see the benefits right away and become free from the baggage of superstition.

From my visits to countries in Asia, I can clearly see that many lay people are visiting temples, inviting monks into their homes to perform ceremonies, and attending big Buddhist conventions to receive blessings, yet we rarely see anyone practicing meditation or contemplating the true teachings of the Buddha. If this trend continues, who knows what the future holds for this great tradition that we all love.

The world is changing with digital technology and unsurpassed access to information—knowledge that will also alter the consciousness of the collective. What people want this year may not be what they want next year. In the West, the traditional Judeo-Christian religions are dissolving so rapidly that many European nations are secular in almost every aspect. A secular society without spirituality can come with many problems, such as a lack of introspection, compassion, sympathy, and altruism. It’s time for Buddhist leaders to rethink how we’re going to maintain this extraordinary Buddhadharma to serve humanity’s wellbeing.

Meditating with Mother Earth
Happiness, Expectations, and Learning to be Losers: An Interview with Ajahn Brahm
Debunking the Myth of Meditation
Cultivating Wellbeing in the Heart of the City: An Interview with Tsoknyi Rinpoche
Exclusive Interview: Yongey Mingyur Rinpoche on Living Life with Balance and Awareness