Yeshe Tsogyal, whose name means Victorious Ocean of Wisdom, was the chief disciple and consort of Guru Padmasambhava, the Indian master who firmly established Vajrayana Buddhism in 8th century Tibet. She is renowned for gathering and preserving the immeasurable teachings of the historical Buddha, Shakyamuni, and Padmasambhava through hidden treasures sealed for future generations in the minds of chosen disciples and in mountains and rocks. Said to have lived to the age of 211, she worked ceaselessly to benefit beings. The most celebrated heroine in Tibet’s history, Yeshe Tsogyal’s life story is a profound teaching and an account of a fully enlightened female Buddha.

Yeshe Tsogyal was born the princess of Kharchen, in the valley of Drak in central Tibet, to the southeast of Lhasa—a holy place associated with the Great Mother from ancient times. The goddess Saraswati is said to have frequented the area in antiquity, while the valley itself is cradled by the mountainous abode of Vajravarahi and Dorje Yudronma presides as the guardian protector.

Legend tells us that Yeshe Tsogyal’s birth was accompanied by miraculous and auspicious signs—the earth quaked with roaring thunder, flowers rained from the sky, five-colored rainbow light surrounded the palace, and the lake greatly expanded and overflowed. At the lake’s edge, myriad types of flowers appeared in wondrous shapes and sizes, speckled with red and white.

The birthplace of Yeshe Tsogyal is known as Tsogyal Latso. Some twelve hundred years later, it remains a place of pilgrimage and a source of blessings. Today, a monastic community of 15 resident nuns continues in Yeshe Tsogyal’s footsteps, preserving the lineage and legacy of enlightened feminine wisdom. For pilgrims, Tsogyal Latso is a treasure trove of relics, sacred geology, and the history of Buddhist saints.

The lake, or latso, is the life force of Yeshe Tsogyal, a repository of spiritual treasures and a prophetic body of water. The most famous account is of the 18th century mystic Rigdzin Jigme Lingpa, who visited the latso and in supplication made offerings of a jeweled wheel and a white silk scarf. He slept against a tree, and in the early morning awoke to find his body had left a deep impression in the trunk. As he gazed out on the reflection of the water, sacred symbols appeared as dakini script, which he later revealed as the Yumkha Dechen Gyalmo, the Vajrayogini sadhana of the Longchen Nyingthig cycle of teachings. The tree that Jigme Lingpa rested against remains, and his imprint can be seen to this day. 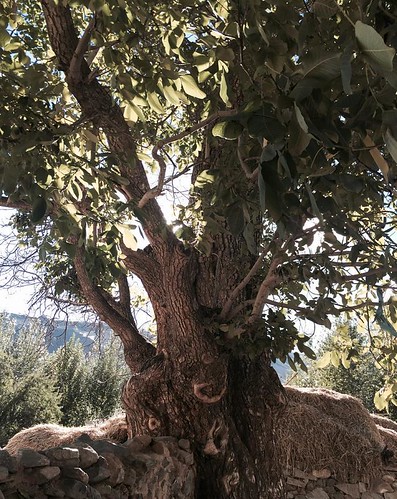 Yeshe Tsogyal has a magnificent “life force tree” down the road from Tsogyal Latso, which grew from blood that fell while severing the umbilical cord at her birth. Protected by guardian naga spirits, this living, breathing, tree of life flourishes near the stupa commemorating the holy ground where she was born. Stories tell of the naga king Nanda offering Tsogyal a pillar he had made from her sublime tree, which he blessed and nurtured with the sacred substances of white tiger’s milk and essence of milk from the wish-fulfilling cow. The precious gift of the naga king whose milk is said to have fed the young Tsogyal remains enshrined in the temple at Tsogyal Latso.

To the west of the latso lies the secret stream of the Dakini’s Breast Milk. As the fresh-water spring flows warm in winter and cool in summer, small white flowers bloom all year round. To merely taste this ambrosial water is said to have the divine power to remove temporary illnesses and purify negativity and obscurations, ultimately liberating one from the lower realms.

Relics at Tsogyal Latso, such as handprints and a footprint in stone she made at age eight, also remain to bless us and remind us of her life story.

At the time when Yeshe Tsogyal lived, the valley of Drak was abundantly forested, with fragrant red and white sandalwood trees and aloe-wood flowers. The palace of the Kharchen king was marvelously abundant with riches. Over many generations, however, the wealth and vitality of the place diminished. The land became dry and barren, and the activity at Tsogyal Latso slowly declined. During the Cultural Revolution (1966–76), the area suffered severe degeneration. The temple was destroyed and used to store grain. Representations of enlightened form were also discarded into the lake, which was kept as a cesspool for over ten years.

Yet the sacredness of the place was not forgotten. Through the activity of many sublime teachers and the faith, dedication, and merit of sangha, the sacred site of Yeshe Tsogyal has now been auspiciously restored and reborn as a thriving community of practitioners.

The reawakening of Tsogyal Latso began with the pilgrimage of the highly esteemed and accomplished Nyingma master Tulku Sang Ngak Rinpoche. From 1979–80, he cleaned the latso, repaired the temple, and installed a statue of Yumkha Dechen Gyalmo. Then, in 1992, the great female master and emanation of Yeshe Tsogyal, Khandro Tare Lhamo, from the nomadic region of Golok, arrived at the latso with her consort Namtrul Jigme Phuntsok. They came as predicted in ancient texts, as part of a sacred pilgrimage to U-Tsang, and resided there for seven days. Marvelous appearances were witnessed as the manifestation of the dakini’s activity. A five-colored tent of rainbow light emanated, and Tare Lhamo saw the eyes of the Yeshe Tsogyal statue in the temple move and its facial expression change. She blessed the people of the region with Dharma teachings, long life and Varjayogini empowerments, and more. Her two main disciples, Dorje La and Arga La, assisted and invited five master painters from Samye Monastery, who built statues of Vajravarahi and Chenrezig and painted murals on the temple walls. Residential rooms were also built and a small nunnery was established.

In 1995, Rigdzin Yidzhin Norbu, the throne holder of one of the six “mother” Nyingma monasteries in Tibet known as Dorje Drak, conferred blessings and consecration at Tsogyal Latso. He installed a new shrine keeper and the lake was thoroughly cleaned. A wall of mani wheels was offered by his students, and erected around the latso.

Although renovations had been completed and consecration bestowed by sublime teachers, the resources at Tsogyal Latso were extremely scarce and the site was severely dilapidated. A few nuns persisted, but it was very difficult to maintain residence in this barren environment.

In 2004, a local nun who, as a young girl, had observed Tulku Sang Ngak repairing the temple, inspired by the life of Yeshe Tsogyal came to live at Tsogyal Latso with the vision and determination to rebuild. Over the years, the assembly of nuns grew and, with the help of the community, transformed the site.

In the first four years, the nuns managed to build a perimeter wall around the complex, clean the latso, add flooring to the temple, and expand the residential quarters. In 2009, they built a new stupa around the original that marked the birthplace of Yeshe Tsogyal, which was crumbling and in need of repair. 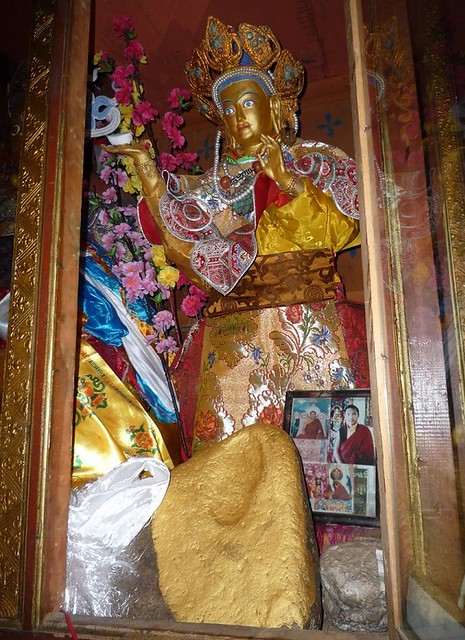 Statue of Yeshe Tsogyal with footprint relic. Photo by DYW

In 2012, the nuns were faced with the challenge of maintaining the temple. The structural supports and columns were worm-eaten, and had therefore become unstable. As locals and pilgrims had started coming to practice there the assembly had grown beyond capacity, and the nuns began to dream of rebuilding and expanding the structure.

Consulting many high lamas about how to rebuild and maintain the integrity and blessings of the place, the nuns were advised to adopt the age-old practice of recycling, by integrating the materials of the old temple into the new. In preparation, and to create positive conditions, they accumulated one hundred thousand mantras of the deity Vajrasattva and an equal number of praises to Arya Tara. In addition, they requested many prayers and made offerings to different monasteries. Monks from Mindrolling monastery were also bought in to perform ceremonies to safeguard the construction.

In 2015, the erection of the temple and surrounding buildings at Tsogyal Latso auspiciously commenced, and work continues today. A new stupa has been erected next to the latso and a new temple, a kitchen, and simple accommodation for local pilgrims have been built.

To witness a new generation of yoginis, living among the highest peaks of the world and devoted to a life of spiritual practice, is truly inspiring. The tenacious and resilient nuns of Tsogyal Latso who maintain the lineage and legacy of Yeshe Tsogyal are contemporary heroines, and show that all things are possible with faith, devotion, discipline, and effort.

Enlightened beings and masters from time immemorial have come to receive inconceivable blessings and pay tribute to this transcendent place. Beginning with Saraswati and continuing with masters of our time like HH Dilgo Khyentse Rinpoche and Khandro Tare Lhamo and the precious sangha on the path, Tsogyal Latso has remained a pure land in our world, a place where enlightened feminine wisdom thrives and the divine mother lives on. As the mother of three boys, LiAnne Takeuchi Hunt devotes her time to the practice of maintaining patience and loving kindness. Committed to supporting sacred sites and traditional communities, she is also involved with projects in Nepal and Tibet. A professional dancer and international teaching artist, LiAnne is the recipient of multiple awards for her work to preserve the Newar Buddhist ritual art of Charya Nritya. Best known for her performance offerings of Vajrayogini, she enjoys sharing the ancient upaya of singing and dancing as meditation with practitioners who wish to include the physical yogas on the path.

In the Minds of All Beings: Tsogyal Latso of Tibet
Ewam: Nyingma School of Tibetan Buddhism (Tulku Sang Ngak)
The Treasury of Lives (Khandro Tare Lhamo)