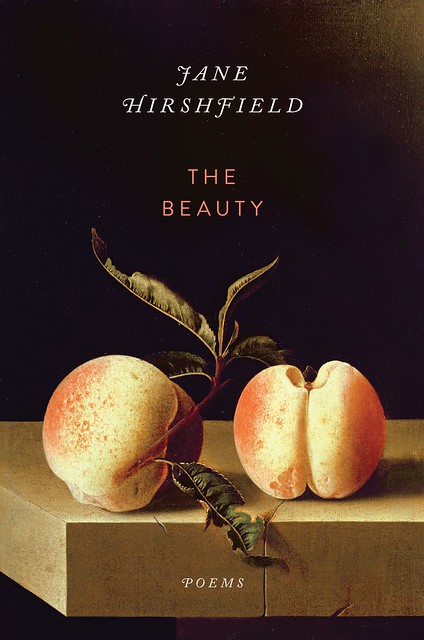 Cover of The Beauty. From womensvoicesforchange.org

I found myself
suddenly voluminous,
three-dimensioned,
a many-roofed building in moonlight.

So writes Jane Hirshfield in her collection The Beauty (Knopf 2015). She is describing a startling moment of awakeness, such as might occur in a Zen meditation session:

Thought traversed
me as simply as moths might.
Feelings traversed me as fish.

A Buddhist practitioner might recognize, in those words, the experience of witnessing one’s own thoughts and feelings during deep meditation. And yet this is not a sutra or a Buddhist text. It’s a book of poems.

More than any other major contemporary English-language poet, Jane Hirshfield has been connected with both Zen practice and poetic craft. Her poetry is infused with Buddhist thought. While it would be simplistic to call her a Zen poet, her poems are spare and threaded with moments of illumination, insight, and silence. For the Buddhist reader, ideas of interbeing, non-self, and awareness of the everyday jump out in her work. They are not couched in religious language, but rather the language of art. Nevertheless, the poems are accessible even to those who don’t usually delve into verse. Practitioners who are looking for a novel way to approach some of the more metaphysical concepts in Zen will find much to ponder in Hirshfield’s latest collection.

Hirshfield spent three years in monastic practice at Tassajara Zen Center in northern California in the 1970s, before returning to lay life. In an interview with the literary journal AGNI, she said, “As it turned out, poetry was still waiting for me when I emerged.” Since that time, she has published eight books of her own poetry, two books of essays, and several translations, notably The Ink Dark Moon, which features ancient Japanese women poets, and Women in Praise of the Sacred: Forty-Three Centuries of Spiritual Poetry by Women. Her advocacy for the poetry of women has been “to help counteract the lingering myth that there were no historical women writers of significance,” according to the Poetry Foundation. Apart from her Zen Buddhist practice, Hirshfield is renowned as a writer. She has won awards from the National Endowment for the Arts, the Rockefeller Foundation, and the Guggenheim Foundation. Her most recent collection, The Beauty, was a finalist for the National Book Award. In it, Hirshfield explores topics as mundane as the cards in her wallet and the common cold, and as luminous as the fate of the soul wrung from the body, though her probing verse. She allows the language to scaffold the experience of reading a poem, helping her reader—like a meditator—to enter into a moment of clarity or understanding that moves beyond and behind the words.

One of Hirshfield’s greatest gifts is her deep focus. Her poems delve deep into a single experience, opening and opening it until it yields insight. A poem addressed to her corkboard begins simply, with the description that:

However many holes are in you
always there’s room for another.

This most mundane of objects, found in an office or home, begins to give way when pressed further: she admires the “glittering affection” of thumbtacks and ends the poem by admiring its blank absorbency. Yet she ends by probing whether her poem can even truly express the object’s essence:

Even these words that praise you
further disguise you.

Hirshfield questions how far words can take her, and thus extends the poem beyond the end of the page, into the blank space of the reader’s mind.

Such a poem is possibly only with intense concentration. Staring at a corkboard, writing into the heart of it until she questions language’s very ability to describe, is a meditative act. This type of focus is something that Hirshfield describes in her 1997 essay collection Nine Gates: Entering the Mind of Poetry (HarperCollins). “When you go to concentration’s center, you are pricked, which should mean you wake up—exactly what a good poem helps you do,” she writes in “Poetry and the Mind of Consciousness,” an essay in the collection. In other words, Hirshfield sees poetry as a tool in the process of awakening, of paying attention. A good poem helps the reader to see things as they really are.

Such intense concentration often takes Hirshfield to an understanding of interbeing. “A glittering, multifaceted expression of interconnection is among poetry’s central gifts,” she writes in Nine Gates. She uses poetry’s ability to link disparate, seemingly unconnected images, tracing the way a mind makes associations, to explore interbeing. For example, in “My Proteins,” a poem written to the cells and their components, she begins with a scientific discovery: the protein for itching has been discovered. Into this tiny fact she delves, adding that:

ninety per cent of my cells, they have discovered,
are not my own person,
they are other beings inside me.

And then the poem blooms into connectedness:

Yet I, they say am they—
my bacteria and yeasts
my father and mother
grandparents, lovers
my drivers talking on cell phones . . .”

In the focus on a single protein, Hirshfield finds all the world. Her relationship to other life is enacted through this long list of the other beings that reside inside her body and her body’s cells. It’s a remarkable way to think about interbeing, and for readers familiar with Buddhism, a clear exploration of one of the key concepts in Buddhist philosophy.

Zen is often thought of as silent, beyond words. Hirshfield herself has noted that during her time at Tassajara, she wrote only a single haiku and spent her days just learning “how to live.” Nevertheless, she has become a poet who employs language to track the mind’s movements. In doing so, she enacts many of the ideas of Zen in her art. For readers looking for “the precise and beautiful movement of mind in language,” as she notes in Nine Gates, Jane Hirshfield’s poetry is a great place to start.

Entering the Stream: Book Review of The Hidden Lamp
Continuing the Legacy of Chan Master Sheng Yen
Connecting the Spirit with Love Through Authentic Art