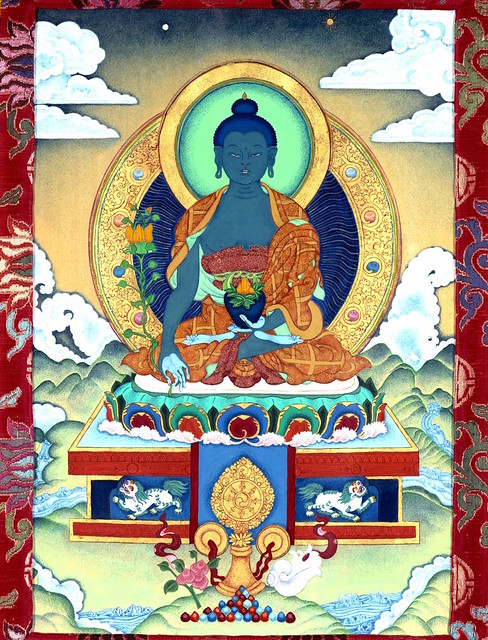 The Medicine Buddha is a healing Buddha from the Tibetan Buddhist tradition. Many cultures have healing deities or rituals, and the Medicine Buddha is a profound practice for healing physical, mental, and emotional ailments. It is even more powerful when a group practices together, focusing on the loved one or person who needs healing. I have seen so many what could only be called miracles related to this practice.

Giving a simplified description of the practice, we can say that it begins with preliminary mantras and prayers and then—and this is the wonderful part—one visualizes the Medicine Buddha, blue in color like the Vaiduriya jewel. One then goes on to visualize the Medicine Buddha’s healing energy radiating in all directions, especially to the person named, practicing the healing mantra Tadyatha Om Bhekhaze Bhekhaze Maha Bhekhaze Bhekhaze Radza Samungate Swaha for at least one mala or 108 repetitions, and then one dissolves into the “great seal of emptiness," or rests the mind in the natural state, and dedicates the merit to all sentient beings. It is a beautiful, transformational sadhana which heals both the person who is the focus of attention as well as the practitioner. The practice is most effective when the person suffering is engaged in the process—they also practice the healing mantras and invite the healing in. 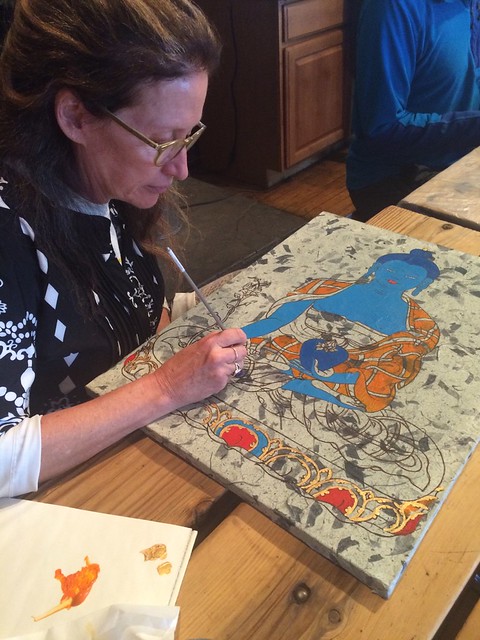 I feel doubly lucky in that I also paint the Medicine Buddha. It’s such an extraordinary way to clarify one’s visualization and in a sense, befriend this healing Buddha. I have painted a couple of traditional Medicine Buddha thangkas, which took six months each, and have made dozens of watercolor paintings and woodblock prints, which I gave to the person suffering illness. While painting, I try to keep my mind in a pure place and repeat the healing mantra. It is so much more than just making a painting; it is helping to manifest a Buddha with the motivation of being of benefit to all sentient beings.

I was raised Catholic, and we would do the rosary for people. In later years, my mom would phone me to say that a particular friend or relative was sick. She said, “Faith, you do the Medicine Buddha and I’ll do the rosary. We’ll tackle the illness from all sides.” I had a super-cool mom. We witnessed the results together. 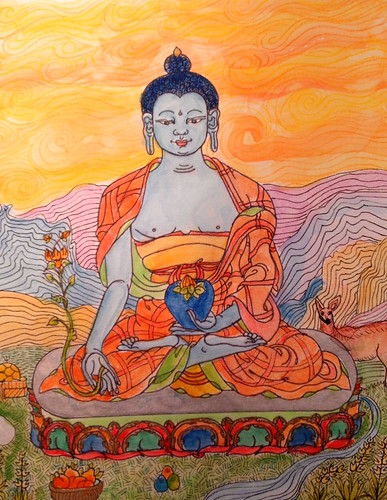 This past year, my Sangha experienced two very traumatic health ordeals: a young man was thrown from a horse and his femur broke. He had successful surgery for the break but then, post-operative, while he was waiting to be moved to a room, his girlfriend saw his heart stop beating. She called for help, and while the doctors were able to restart his heart, they were afraid that the blood clot and his heart stopping were going to leave him in a state of permanent brain injury and warned the family that he may never be normal or even be able to walk again. Collectively, we began doing round-the-clock Medicine Buddha practice, with sangha members overseas pitching in during daylight hours that were nighttime here. Ben was in a coma for a month before regaining consciousness and immediately recognizing his girlfriend. Now, he is 98 per cent healed. We have no doubt that it was due to the practice. I had also painted a small Medicine Buddha to place at his bedside, to keep watch over him.

In August, a sangha mom who lives in the mountains went into early labor, and the baby girl was born breech and did not take a first breath. The mom did not cut the umbilical cord, which was not done until the paramedics arrived. The baby needed to be airlifted to the hospital, and the team of doctors feared she had been deprived of oxygen for too long and that her brain function would be severely compromised. Again, a call went out to sangha near and far to focus on the baby girl and her mom. Now, Virika is almost six months old and meeting all of her growth milestones. 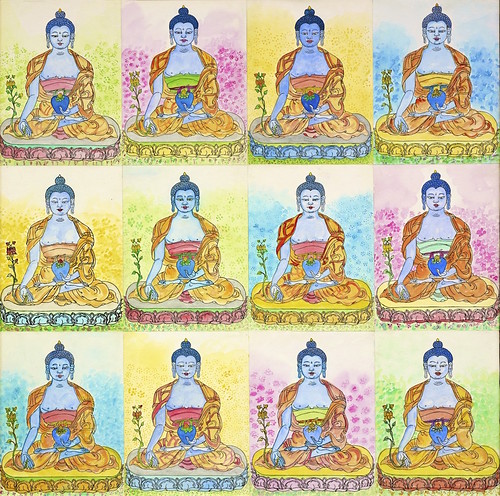 I have also been the beneficiary of group Medicine Buddha practice. I had surgery on my gallbladder and there were complications: the doctor accidentally cut an artery, and while he thought it had been successfully repaired, it hadn’t, and I had internal bleeding. Having had the surgery as an outpatient, I was sent home. I was slowly bleeding to death. I didn’t know what was wrong, just that I felt very strange. I thought that if I could only fall asleep, I would be okay when I woke up. Had I done so, I would have died. My husband could see that something wasn’t right and took me to hospital, where I underwent emergency surgery. For the next few days, I felt as if I was in a bardo (according to Tibetan Buddhism, a transitional state, often referring to the bardos between the end of life and rebirth). It was very much like what I’ve read about in the Tibetan Book of the Dead—I would see beautiful deities and protectors who I recognized from my thangka painting practice and then I would see demons and the most frightening things. It felt like a dream from which I could not wake up, and I felt as if the fabric of my life was unraveling. The practice that helped me most was simply surrendering to the energy, like dissolving into emptiness at the end of Medicine Buddha practice. After three days in this state, floating between life and death, I suddenly felt as if the fabric was growing back together. I was coming back. I had the idea that this must be the result of my sangha doing Medicine Buddha mantras. It was as though each mantra were another thread weaving my fabric together. I’m quite sure that this is what happened. Having had this experience, my faith in the Medicine Buddha and the power of sangha has grown even stronger. 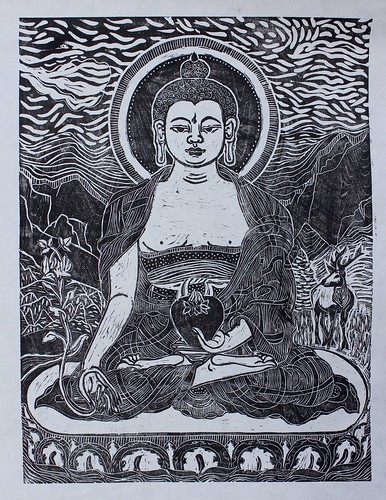 Now the Medicine Buddha practice is part of my daily life. There is always someone who needs a little extra love and healing. A group of us commit to doing daily mantras for friends and family and anyone in need. While we haven’t been able to fully cure every single person, we have been able to help the vast majority and be of service to our fellow sentient beings. The practice greatly improves the quality of one’s life. Stress, fear, and negative emotions have such an impact on health. The Medicine Buddha alleviates much of the stress and fear while bathing the person in healing energies. I also continue to paint the Medicine Buddha. He is probably my favorite Buddha to paint. And I definitely feel that we are friends.