Coss Marte with the author at Clearwater Bay, Hong Kong

Over the course of our lives, we are slowly conditioned by the communities in which we live. We allow appearances to cloud our perception. We make judgments about people, places, and things based on impressions we have been fed over the years. No one is to blame, that is just how societies are. It’s also a way in which governments wield control over us—they tell us what is right, what is wrong, who is good, who is bad, who is worthy of our praise and who deserves our ire or loathing.

Fear and hate are byproducts of prejudice and we can see their negative impact all around us; the recent US elections have shined a light on the darkness that lies within many of us. These divisions in our minds and hearts are created by ourselves because we allow mass media and mass hysteria to cloud our judgment. I recently had a close encounter with my own little voice of darkness that tried to cloud my judgment by awakening fear and mistrust within me.

In the last few years I have had monks, Zen practitioners, writers, entrepreneurs, comedians, yoga teachers, movie stars, activists, and dreamers stay as guests in my home, which has become something of a pit stop for people transiting through or visiting Hong Kong. The insights I have gained through conversations with this broad spectrum of houseguests have been fascinating and my mind has been challenged and stretched significantly, but my most recent guest managed to stretch my preconceptions even further. 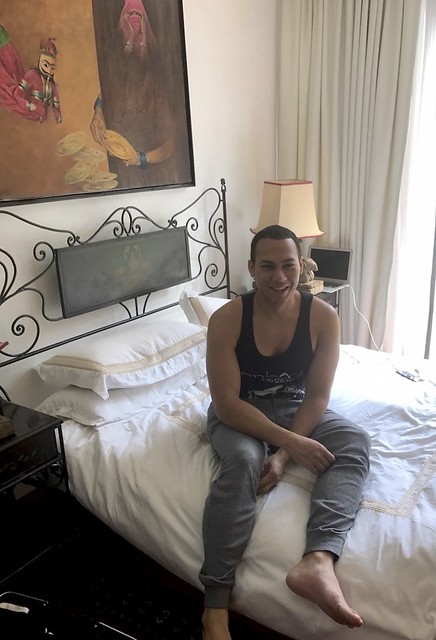 Earlier this year, I invited an ex-convict named Coss Marte to stay. I confess that soon after I extended the invitation, there was a moment when I questioned myself. After all, here was a convicted felon who had spent six years in prison, of which 30 days were spent in solitary confinement under 24-hour lockdown. What-if scenarios started forming in my head in quick succession: What if he really was dangerous? What if he had not reformed? I have a 14-year-old daughter, what was I thinking? Was I crazy to invite an ex-con into my home? I really had very little idea about who he was, where he came from, why he did what he did.

The mental image that many of us have of former convicts has been implanted by movies and mainstream media. We subconsciously see them as dangerous and try to avoid associating with such people. My brain was doing exactly what it has evolved to do: it was trying to save me from potential danger by instilling fear. Yet I somehow managed to silence the negative voice and decided to follow with my gut instinct. 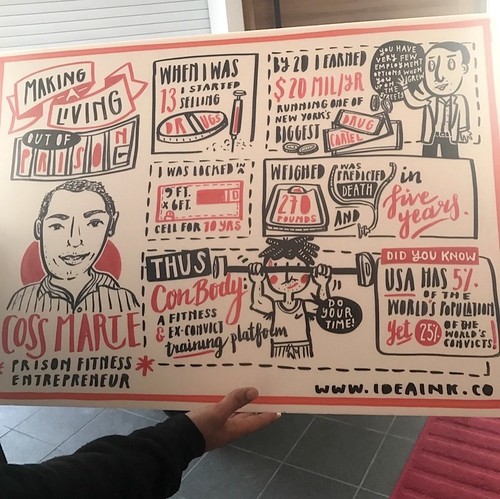 I had immediately liked Coss when I first met him at a TEDxWanChai event in Hong Kong earlier this year. He was one of the speakers and had shared his dramatic life story.

This is Coss’s story in his own words:

I was raised in a heavily drug-infested community where I remember people shooting up heroin in my building. I saw drugs before I even began going to school. We lived in an apartment on the Lower East Side of Manhattan where six of us lived in a tiny space. From an early age my goal was to break the cycle of poverty. People would ask me, “What did I want to be when I grew up?” I would tell them that I wanted to be rich, and the first opportunity to get out of poverty was through the world of drugs.

I started smoking at the age of 11, and at the age of 13 I made my first sale. My role models were the guys on the corner who wore big chains and dressed in the best clothes. So I purchased my first ounce and took it to school. This led me to my own corner, where I began to pitch other drugs with the local guys who respected my motivation to hustle all day and night. I eventually became a leader of a cocaine-distribution ring in NYC, which led me to reach my goal of becoming rich by age 19, I was making over US$2 million a year.

I was only 13 when I was first arrested by the NYPD. From then on, I was in and out for the next 10 years, serving a total of six years. I was charged as a ringleader for running a cocaine distributing service in NYC. I had over 20 people under my supervision, and I developed routes to deliver illegal substances every day. I was eventually caught by federal agents and sentenced to seven years in prison.

My personal transformation happened in a prison cell. After I had been in solitary for 2-1/2 weeks, my sister wrote to me and suggested that I should read Psalm 91 from the Bible. I wasn’t as fond of religion as she was, but I decided to try and began reading the psalm. As soon as I began reading, a postage stamp fell out of the Bible. That stamp had a major significance for me: I had written a letter to my family, but had no stamp to mail it, and solitary confinement meant that I had no way of getting one either. The stamp made me a believer. I read the whole Bible, and from that point on I received a sense of peace and calm. I began to believe that my purpose was to give back instead of destroying individuals around me.

I came up with a way to give back through fitness. I decided to work out and lost 70 pounds in a matter of six months. I helped over 20 inmates lose more than 1,000 pounds combined. When I left prison I began my own business, ConBody, where we run a prison-style boot camp that hires formerly incarcerated individuals to teach fitness classes. ConBody was eventually featured in outlets like The New York Times, CNN, and MSNBC, but it wasn’t so easy at the outset.” 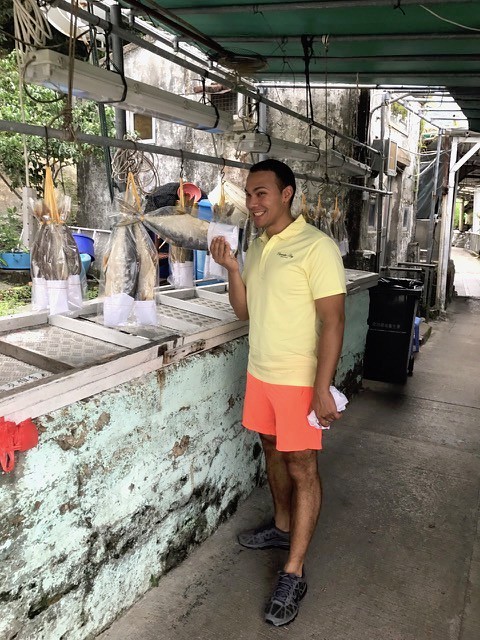 Over breakfast and dinner with Coss after he arrived in Hong Kong, I found out much more about him. His family had moved to the US from the Dominican Republic in search of a better life. The neighborhood they lived in was not the easiest place in which to grow up. Coss became a drug addict and a dealer, and paid a heavy price for his choices. After he was released from prison, no one would hire him or give him any support. When he went looking for a place to open his health studio, no one would rent him the space. His status as an ex-convict clouded their perceptions.

When I asked him if he ever felt remorse or guilt for what he had done, Coss responded that he had regrets, but at that time he knew no better. All he wanted was to escape penury and the only way he knew was via the world of drugs. Coss shared with me an insight into how our society is quick to condemn and to punish, but is slow to forgive. The US prison system is designed to break spirits. The system wants to make sure you do not go back to your old ways, and the only way it knows how to do that is through force.

The prison experiences is aimed at instilling so much discomfort and fear that one is discouraged from ever doing something that will land one back in prison. No one wants to go back, but at times such people are incapable of reintegrating into a society that shuns them and treat them with disdain and fear. We, as a society, need to open our hearts and minds and not allow a person’s past to cloud our perception of them. These people need our love and compassion. Their minds, hearts, and spirits are wounded. They need to heal and we need to help them heal. The Chinese lady who finally rented Coss the space he needed for his first studio turned out to be his savior and healer. 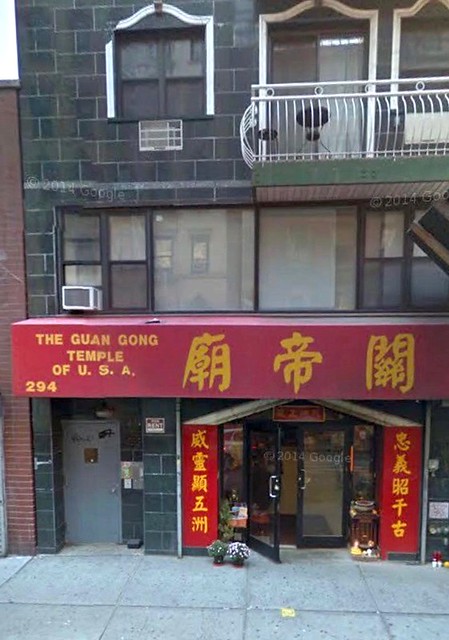 Coss opened his first studio above this temple in New York

When I met Coss, I thought I was doing him a favor by offering him a place to stay. In fact, he did me the favor. He taught me so many wonderful lessons, and my conversations with Coss opened my mind and my eyes. Coss showed me how one can transform suffering into something positive. His time in solitary was extremely hard—with no contact with the outside world, all he had was his own body and mind. But instead of becoming bitter, Coss used his mind to transform his body. Once he saw the benefits of a positive and controlled mind and body, he decided to share this knowledge with other inmates. He became of service to others.

Coss showed me that faith really does move mountains. His mountain was his circumstances, but a tiny postage stamp changed him. What seven years of prison could not do, faith accomplished in moments. The discovery of a stamp when he needed it most was a sign that we all have our guardian angels, we simply need to pay attention and read the signs. The biggest transformations are often preceded by the smallest occurrences.

Coss also showed me the meaning of commitment. Coss makes 20-minute videos of his workouts every day, which he posts online for his clients. Although he was tired, jet lagged, and in unfamiliar surroundings, he continued to fulfill his commitment to his clients and his team. He made his recordings at a beach, on a rooftop, in a tiny space by his bed. He said to me, “All I need is a six-foot by six-foot space to do my work.” Seeing his commitment was so inspiring. That was one lesson I really needed to learn.

I also learned from Coss the ability to see the positive in any situation. When I asked him if he was angry or bitter about his past, he just smiled and said that this was his salvation. Had he continued on his former path, he would have ended up dead from a bullet or his obesity. Prison had saved him! Instead of being angry and bitter, he was grateful.

Coss related to me the incident that led to his solitary confinement. He was a couple of weeks short of being released when he was caught up in a brawl over a misunderstanding. This led to an extended sentence and time in solitary. He could have been very angry and bitter but he forgave everyone who was involved. He really showed me the power of forgiveness and gratitude.

Coss transformed himself from a drug addict and a dealer into a person who promotes health and well-being. In facing insurmountable odds and never surrendering hope, he has completely turned his life around. Indeed, he inspired me to take stock of my own life and to recognize how many times I had given up on ideas, hopes, people, and even myself. Coss may have a dark past, but his future is infinitely brighter and I am so glad that he shared with me a sliver of that brightness.