I am intrigued by the genesis of myth; reflecting upon potential roots that are beyond a local narrative and pose questions for contemplation and dialogue. The omnipresence of ophiolatry (serpent worship) and the origins of the naga are fascinating, as is how the symbol of the snake has been filtered through our mythologies. In part one of this series, I reflected a little on the serpentine appearance in myth and iconography—not only in Buddhism, but throughout nearly every spiritual tradition. I mused on its relationship with fertility and kundalini energy, as well as its role as a representation of personal alchemy and wisdom, and touched upon its association with creativity. And when it comes to creation, there is an undeniable commonality to these myths.

Even before recorded history of around 5,300 years ago, humans were already leaving us clues.

In 1995, during a field trip to the Tsodilo Hills of northwest Botswana, a team led by Sheila Coulson, an associate professor from the University of Oslo, found evidence of serpent ritual activity, suggesting that humanity’s ability to think abstractly and hold rituals dates back some 70,000 years.* If true, this implies that humanity’s veneration of the serpent significantly predates all other recorded mythology. The San people who live there are direct descendants of the earliest known humans on Earth.** They refer to these hills as the “Mountains of the Gods.” They speak of their ancestors, and all of humanity, as having descended from a great python, and that this giant serpent scarred the land searching for water. This legend is not dissimilar to that of Goorialla,*** the Rainbow serpent in the creation myth of Australia’s Aboriginals, which also formed the ground while snaking over the land in search of its tribe.

An ancient painting of Nu Wa, left, and Fu Xi, right, unearthed
in Xinjiang. From wikipedia.org

There are also commonalities with China’s creational narrative, in which the legged serpent reigns as the celebrated benevolent dragon. Among the many variations of the myth is the legend of the half serpent Great Mother Goddess, Nu Kua (or Nu Wa), who restores order to chaos, fashions the planes of the Earth, and births humanity, the majority of whom she formed from mud. In similar fashion, the Egyptian snake Nehebkau swam in the chaos of the primeval cosmic waters before becoming the god who brought together spirit (Ka) and physical matter.

In India, Hindus have the myth of a cosmic serpent called Ananta or Sheshanaga, king of all nagas. The infinite celestial serpent upon which Lord Vishnu reposed, uncoiling and recoiling as he creates, and obliterates the universe. Sheshanaga also parented wo/mankind, appearing in feminine form with the Dhyani-Buddha Amitabha and, in a similar vein to the Nordic Midgard Serpent, would hold the world for all time.

These are but a few examples of creational myths in which a great serpent is the source of life. And while these cultures seem disparate and unrelated, they clearly speak with the same iconography; namely a wavy line that creates matter.

Could it be that the ancients were aware of the sine wave and used the snake motif as an easily recognized visual metaphor? Did they know what modern science is only now discovering? While cymatics (modal vibrational phenomena) clearly demonstrate the effects of sound waves (mechanical waves) on matter, and science shows us that electromechanical waves transport energy through a vacuum, at the subatomic level, in the ocean of pure consciousness, all phenomena arise from oscillating vibrational energy. Matter is but an illusion formed from its frequency and nothing physical inherently exists. It is surely not purely poetic then that it was the naga—the serpents—who held the Prajnaparamita sutras, of all sutras, expounding this very fact. When we feel the energy of the naga, is it a reminder of our true relationship with this phenomenal, even noumenal experience? And if so, how do we use this knowledge?

Is this the “birthing into matter” aspect the reason why the snake has long been attributed with goddess worship—the Mother—and why life on Earth cannot exist without her creation? 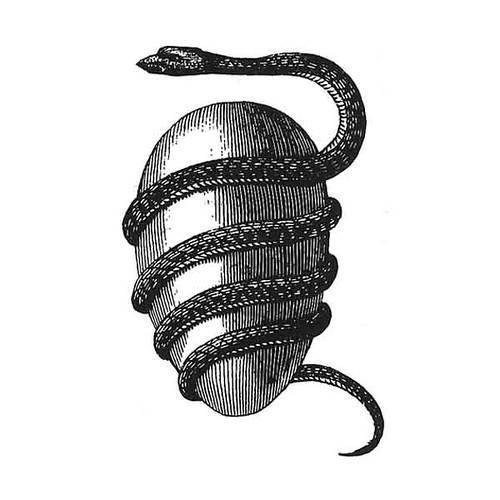 The Orphic or cosmic egg. From jungcurrents.com

All of which brings to mind the most basic aspect of creation—that of reproduction and the image of the serpent wrapped around the egg. The concept of a cosmic egg was first mentioned in the Sanskrit scriptures of the Vedas and known as Brahmanda, and on through to the Orphic Egg of alchemy. But surely it can be seen as simply a visual metaphor for conception? Is this when the snake becomes masculine in its representation of white sperm in union with the egg? 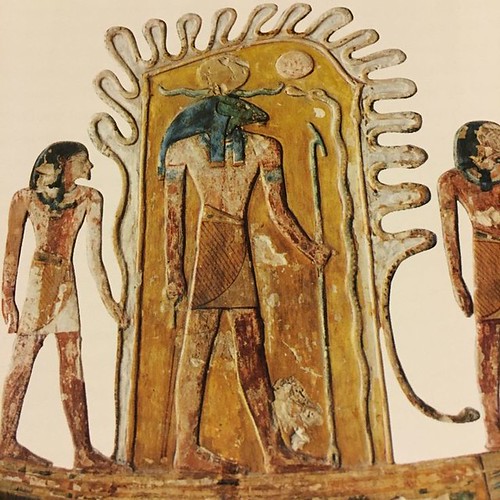 Tomb Of Seti in his Ba form as the Sun God. Around him are Sia the power of the
word and Heqa magic. From pinterest.com

Ancient Egyptian paintings often depicted a red solar disk with a white snake encoiling it (before Ra, their solar deities were feminine, as with many ancient cultures around the world). And while open to interpretation, it also makes me wonder if this was the beginning of the red and white imagery that pervades Hermetic alchemy, Christianity, the indestructible drops of Buddhism through to the ida and pingala energies of kundalini yoga. Was it ultimately simply the red of menstrual blood and the white of semen, the original “recipe” for creation and thus “immortalising” one’s genes? Vedic myth speaks of Shesha (Atanda or Vasuki) having fashioned a rod to stir up a milky elixir also of immortality, known as soma. Although it wouldn’t be until 1677, Dutch scientist Antonie van Leeuwenhoek is credited with being the first person to witness the shape of spermatozoa, suggesting if the imagery of the ancients were of conception, they were already well aware thousands of years ago.

In ophiolatry, the secret elixir of immortality, some say, was made by mixing actual milky venom and antivenom containing the blood of the snake. Curiously this is now a field of increased interest among modern scientific researchers, who are looking into the binding qualities of venom with cells and its beneficial implications for human health. Did the ancients know this? And was this why it was venerated so? Others, however, say however that it is more metaphor, like the red and white of the energies running up our spine during kundalini meditation. 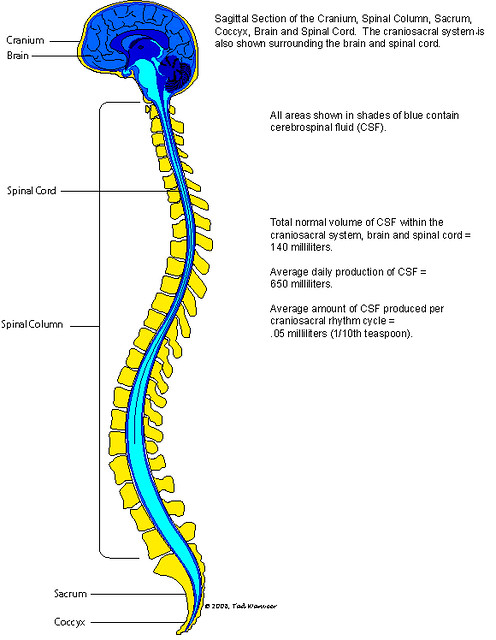 Research shows that there is 150 milliliters of CSF at any one time traveling
from the brain to the base of the spine. From ctcranio.com

Yet this, too, has increasing scientific validity when we look at research on cerebrospinal fluid (CSF) and the work of Mauro Zappaterra among others, which shows that there is 150 milliliters of CSF at any one time and up to 600 milliliters being produced and turned over daily, traveling from both inside and outside areas of the brain to the base of the spine. Research also indicates that our cells access this fluid: information is derived from it and passed on to the rest of the body. The lateral ventricles at either side of our pineal gland look curiously like the twin heads of the snakes of the Caduceus, often also seen flanking a pine cone (representing the pineal gland) in sculptures all around the world. This resonates with kundalini practices and gives a modern perspective of what the yogis always seemed to have known—that the energies snake up our spine and center at the pineal area, which gives us access to altered states of consciousness or, to quote Zappaterra, “CSF as the fluid conductor of source energy to our physical bodies.”

Ventricles of the brain. From humananatomylibrary.com

In fact, the lateral ventricle accesses all parts of the brain, instantaneously communicating information and bypassing synaptic (cognitive) pathways. All this becomes even more curious when we recall ancient Egyptian imagery: the Eye of Horus and the striped crown of the pharaohs with Uraeus crowning the center, surely representing the brain and indicating their awareness of its importance. The pineal gland secretes various hormones that regulate our circadian rhythms, but most significant is the metatonin it secretes, which, thanks to its main ingredient DMT, gives us access to non-ordinary states of awareness. Comparison between a ventral section view of the human brain and design elements of the Egyptian nemes headdress. From pinterest.com

Serpents appear to be one of the most common visions during a shamanic, psychedelic, or visionary meditation. Tellingly—whether urban legend or not—the British molecular biologist, biophysicist, and neuroscientist Francis Crick is said to have ingested LSD when he and his colleague J. Watson had their first vision of the helix structure of DNA in 1953, a discovery that changed the course of biological science.

In the Chinese myth of Nu Kua and her brother, Fu Xi, we see two snake-bodied beings whose representations in art strongly resemble a double helix. In the fertile crescent of ancient Sumer, we also find Enki and his son Ningišzida, who was known not only to the Sumerians, but also to the Egyptians as Thoth in the great mystery school at Karnak. In art he was represented with either the body of a snake and head of man, or as a double-headed, double-helixed serpent. This symbol was later adopted by the Greeks, who called it the caduceus, and its association with health and healing is in use to this day. 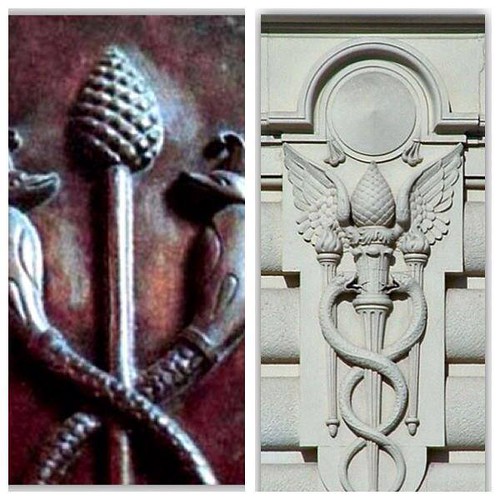 The pine cone staff of Osiris (1224 BCE), left, Egyptian Museum in Turin, Italy,
and a caduceus depicting a pine cone, right, on the Whitehall Building in New
York City. From joindiaspora.com

Even with these few examples, it seems difficult not to imagine a more perfect creature than the snake to represent these aspects of creation. In part three of this series, I will go beyond examples and return to the origins of the naga in relation to the dissemination of wisdom, how this ties in with my focus on ancient Egypt, and other potential secrets that may prove fundamentally intriguing.

While the jury may be out on the exact dates of the serpent caves of Botswana, it is now accepted that the “paint factories” discovered in the Blombos Cave in South Africa date back 100,000 years, making Coulson’s dates quite feasible. The clear evidence at these caves demonstrates that the evolution of humanity and our earliest ritualistic reverence as we’ve been taught by conventional history, is out by tens of thousands of years.

** Genetics of the SAN people