The temple complex of the Little Western Paradise and its natural environment. Image copyright Wang Wei

Qianfo’an (千佛庵), the Temple of One Thousand Buddhas, better known as Xiaoxitian (小西天) or the Little Western Paradise, is located in present-day Xi County, Linfen Municipality, in China’s Shanxi Province. The temple complex was built on top of Fenghuang (鳳凰), or Phoenix Mountain, and occupies an area of 1,100 square meters. According to the earliest account of the temple, its construction was initiated by the travelling Buddhist monk Dongming between the second and 17th year of the reign of the Chongzhen Emperor (r.1627–44) at the end of the Ming dynasty (1368­­–1644). Today, the Little Western Paradise is most admired for the more than 1,000 polychrome clay sculptures housed in the 169.6-square-meter Upper Main Hall. Crafted at the beginning of the Qing dynasty (1644–1912), these sculptures are integrated into the building’s wooden structure, creating palatial and extravagant scenes of a Buddhist Pure Land.

Owing to the exceptional quality of the sculptures, the temple was inscribed on the List of Cultural Relics Sites under State Protection in 1996. However, because Xi County has remained underdeveloped since the Ming dynasty, the temple and its sculptures remain relatively unknown, even within Shanxi. My study of the Little Western Paradise is based on extant local gazetteers—the 1709 Kangxi edition and the updated 1898 Guangxu edition—as well as my own visits. While much fascinating information about the temple has come to light, this article focuses on the clay sculptures. 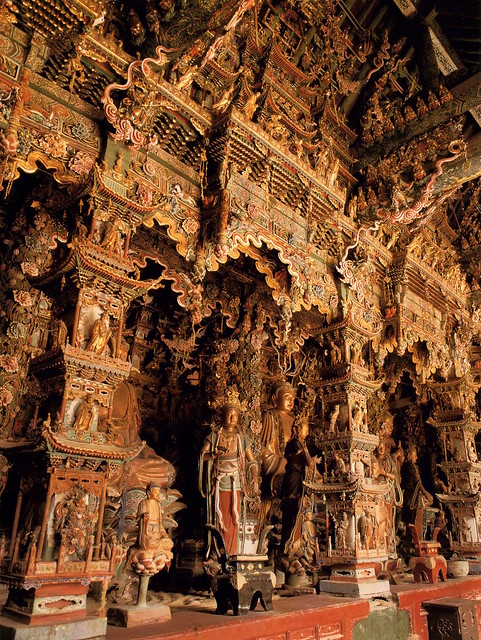 The west wall. Image copyright Zhejiang Library, the database on the
sculptures at Chinese temples and ancestral halls, No.2272

The subject matter of the sculptures is clearly indicated by inscribed plaques originally hung on three walls of the Upper Main Hall, although a few have been lost. On entering the hall, one sees the five Buddha niches on the west wall for Bhaisajyaguru, Amitabha, Shakyamuni, Vairocana, and Maitreya. The forms of the Buddhas and their backgrounds are repetitive—the Buddhas are all 3.2 meters high and 0.9 meters wide, and are flanked by two bodhisattvas who are not inscribed but can be identified from iconographical conventions. The north wall illustrates the Kamadhatu and Jataka stories, while the south wall depicts the Lapis Lazuli World with the Amitabha triad. The Ten Disciples are divided and lined up along the lower parts of two side walls, while behind them are three boy attendants on each side. 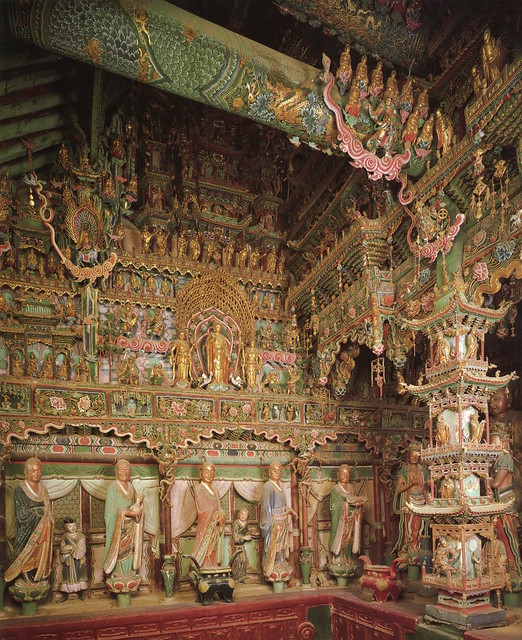 The combination of the Five Buddhas appears heterodox, matching neither the textual descriptions of the Five Dhyani Buddhas nor the Five Buddhas of Bhadrakalpa. While each niche represents the pure land of its respective Buddha, all are modeled on early pictorial representations of Amitabha’s Pure Land, which had been standardized by the early Tang period (618–705) (the south wall of Cave 220 at Dunhuang provides one of many examples). The five Buddha niches all follow the symmetrical triad composition in which a large Buddha is flanked by two bodhisattvas, with additional key elements prescribed by the Amitayurdhyana Sutra: jeweled trees, towers and pavilions, a lotus pond, and lotus pedestals. The popularity of Amitabha belief and iconography in the region is clearly reflected. Nevertheless, the unorthodox combination of the five Buddhas seems to be inspired more by an overarching Mahayana cosmology than veneration for specific Buddhas, expressing a general aspiration of rebirth in an ideal place. Funded by one monk for a relatively small community, the conception and execution of the sculptures may have allowed more space for creativity and less concern for doctrinal restrictions. 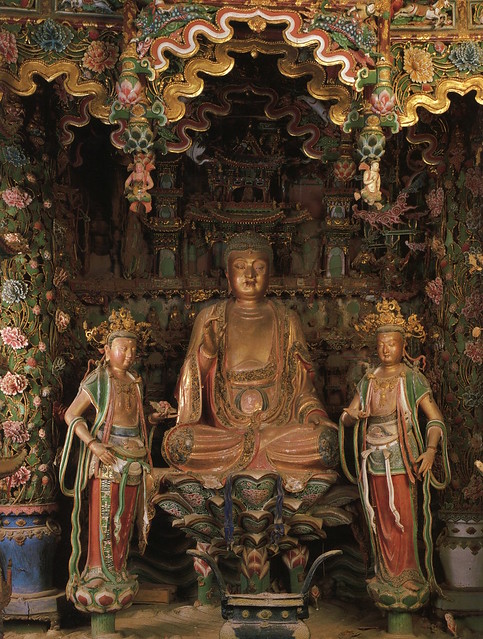 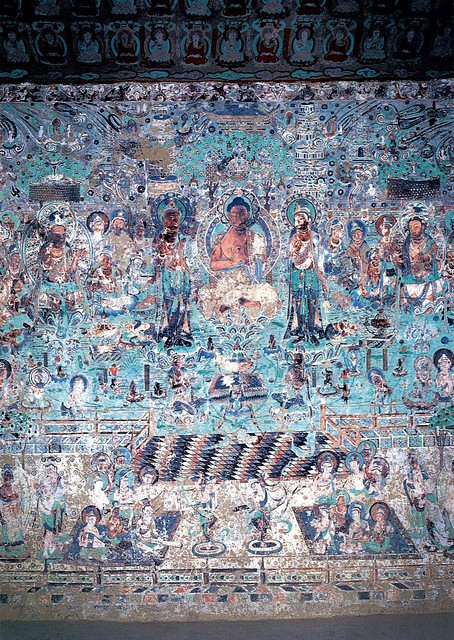 The Little Western Paradise is widely regarded as an exemplar of the xuansu 悬塑 (hanging sculpture) technique of the clay sculpture tradition, in which sculptures are attached to a wall or a wooden structure with dowels inserted at an oblique angle. It was by no means a new idea to “hang” clay sculptures on a vertical surface. In Buddhist sites in Gansu Province and Central Asia, small figures, often molded, were attached to cave walls. In the western Himalayan region, sculptures were also affixed to temple walls with wooden pegs. The technical advance of xuansu was in the use of metal dowels and wires, which fasten more effectively and are less noticeable. Wires are also employed as a frame for modeling fluttering ribbons, headwear ornaments, and strands of hair, perfectly chimed with the light weight and plasticity of the clay. Xuansu was therefore an ideal medium for achieving extremely fine detail and accommodating a large quantity of sculptures. 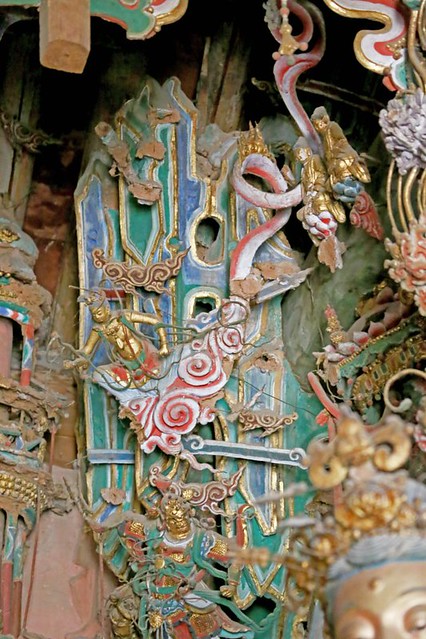 The overcrowding array of sculptures at the Little Western Paradise is indeed impressive. Not only the main figures, but also the backgrounds and narratives were created in three dimensions, independent of pictorial representations (except for the haloes of small figurines painted onto wooden plinths), permeating all three walls in the Upper Main Hall. This feature, though pronounced, was not widespread in contemporary practices. With such a kinetic and immersive experience, worshippers at the temple were not merely in front of a depiction of the Pure Land but rather were inside the Pure Land. In contrast to the splendid architectural elements of the sculptures at the Little Western Paradise, almost everyone in Xi County lived in yaodong (窯洞) dwellings carved into the loess hillside. The gazetteers also reveal that during the construction of the Little Western Paradise complex (1629–44), Xi County was struck by relentless famines from the first year of the reign of the Chongzhen Emperor. Residents were forced to eat grass roots and tree bark, the roads were strewn with dead bodies, and wolves took many lives. An incident of cannibalism was even recorded in which a certain Li Shijin ate his own son. When the sculptures were being made between 1644 and 1656, Xi County suffered further from locust plagues. This dire reality explains why in the Pure Land depicted at the Little Western Paradise, six boy attendants are shown entering to serve food and drink—in fact, one of them is holding a wine ewer that would constitute a breach of Buddhist precepts, not to mention that he stands immediately behind an arhat. As the deputy magistrate of Xi County, Yang Jichun eulogized in his writing in 1643 that Dongming’s purpose in constructing the temple was for the salvation of everyone in the community. The ostentatious display of gold, plenty, and paradise depicted in the sculptures, therefore, was intended to provide emotional consolation by creating a Pure Land so different from this world of enduring of hunger, poverty, and death. Moreover, making the sculptures was considered a means to express religious piety and to accumulate merit for local residents. Such an ambitious enterprise came at the high cost of more than 3,000 taels of silver. To illustrate what the expenditure meant to the local community, we shall refer to another incident when magistrate Zheng Xun (1700–07) renovated the state-supported Confucian school in the prefecture. It was suggested that the renovation could cost as much as 1,000 taels; however, Zheng Xun, who abhorred extravagance, economized and reduced the cost to just several taels. Although we should take this account with a grain of salt, as one agenda of gazetteers was to praise the integrity of local officials, we can still understand the special position of the Little Western Paradise and the strong devotionalism shown toward rebirth in Pure Land in Xi.

Rather than regarding the extravagant expenditure on the temple and the sculptures as backward and superstitious, one must realize that Xi Prefecture, isolated by its gully-filled terrain on the Loess Plateau, was subjected to frequent natural disasters for almost a century. One earthquake in 1695 was so severe that relief had to be sought from the imperial government. Haunted by despair, both monastics and laity consumed more resources to renovate the temple until the end of imperial period. Indeed, the Little Western Paradise visualizing rebirth in Pure Land provided the promise of a better place, and made the harsh conditions of day-to-day reality more bearable. 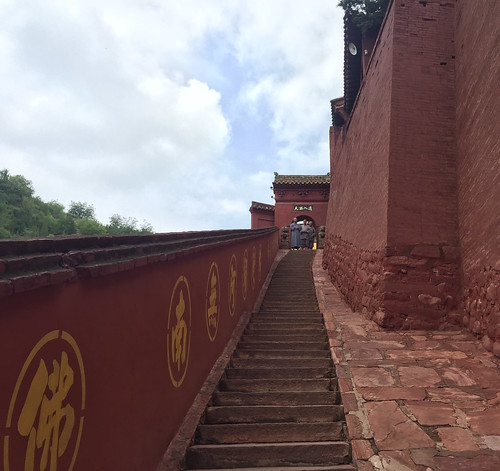