Uniforms sponsored by DEV for the children of TK Giri Paramita, a Buddhist school in Yogjakarta. Image courtesy of DEV

I met Nathalia and her friends at the Buddha Dhamma Arama in Jakarta, where they were offering alms to Bhante Kamsai and other monks. Catching my inquisitive look at the message #sayadanaeveryday (which translates to “I offer alms everyday.”) emblazoned on their t-shirts, Nathalia explained with a laugh: “No, we’re not a protest movement. Dana Everyday is a Buddhist charity and what we do is to try to offer dana to selected temples daily.” Nathalia Sunaidi is the driving force behind Dana Everyday (DEV). Growing up in a low-income family, Nathalia had her share of hardship as a child. In spite of this, she had the good fortune to study at a Buddhist school, something she attributes to her past good karma. Hence, whenever circumstances allow, Nathalia makes a point of offering dana (Pali, Skt. the practice of generosity) to the sangha to the best of her means. Now in her thirties, Nathalia believes that her successes in life—both in her career as a hypnotherapist and an entrepreneur, and in her family life—are the fruit of her generous acts.

Amazed at her success, her friends often ask Nathalia to share her “secret formula for success,” and Nathalia explains to them that it is because of the merit she has accrued through her regular offerings of dana to the sangha. Soon friends were tapping into her resourcefulness and joining in the dana. As word spread, Nathalia found herself receiving more and more donations for dana. To ensure that the accounts are well managed and transparent, Nathalia decided to register DEV as a charity with the help of a few friends. A DEV member cheers up Evasari, who is receiving DEV support for treatment of a urinary condition. Image courtesy of DEV Relatively well off, Jakarta’s ethnic Chinese Buddhist community are generous when it comes to making offerings to the sangha, especially on special occasions. Image courtesy of DEV

Within three short years, DEV has grown from just four people to more than 1,000 members who are connected and keep abreast of DEV’s activities through social media. Most are young Buddhists who dedicate their time and effort on a voluntary basis. With no lack of generous donors, the registered charity has moved beyond merely offering dana to the sangha, reaching out to the wider community, providing education, medical, and financial support for poor families, and renovating and building temples in remote Buddhist communities.

“Indonesian Buddhists, particularly those in Jakarta, are made up mainly of ethnic Chinese who are, by comparison, financially well off,” Nathalia explained. “Most of them have little interest in studying the Dhamma or in meditating, or are too busy with their daily lives. But they are devout Buddhists. They go to temple on special occasions, observe the rituals and make offerings. They have strong faith and are very generous when it comes to offering dana. DEV gives them the chance to offer dana and accumulate merit without having to devote too much time and effort.” A Buddhist elementary school in Banaran donated by DEV. Image courtesy of DEV

Among DEV’s many beneficiaries is 3-1/2-year-old Indah from the village of Banaran in Central Java. Born with a hearing impairment, little Indah’s world was one of silence and isolation. Her poor parents could not afford to send her for treatment. When DEV learned of her condition during a field trip to Banaran, they offered to sponsor the family to travel to Jakarta to seek medical attention. Through DEV’s support, Indah was admitted to the Tzu Chi Hospital in Jakarta. DEV also helped to arrange accommodation for the family at the hospital’s patient residences during the months of treatment. In addition, DEV also provided financial assistance to the family, as they had no source of income. Hugging Indah in her arms, the smile on her mother’s face says more than words ever could: “I cannot find the words to express my thanks to Nathalia and DEV for what they have done for us,” she says. “We would never have been able to afford all this. DEV has given Indah a new life.” Today, with a cochlear implant, Indah is undergoing hearing therapy and is opening up, smiling and learning to interact and play with other children. DEV members with one of Evy’s daughters, for whom DEV has pledged educational support all the way to high school. Image courtesy of DEV

Unlike Indah, Evy Christin was not so fortunate. Coming from a poor neighborhood in the slums of Jakarta, Evy was diagnosed with terminal cancer. Despite DEV’s assistance, treatment came too late. As a mother of two young children, aged 4 and 12, Evy’s main concern was the education of her children. Although Evy eventually succumbed to her illness, she was able to go with peace of mind as DEV pledged to support the educational needs of both children all the way to high school.

Besides offering dana to the sangha, DEV has been raising funds for the renovation and rebuilding of temples, especially in remote Buddhist villages outside in other parts of Java. DEV also supports students in Buddhist educational institutes in these villages through the provision of schooling needs, uniforms, and other necessities. There are a number of non-Chinese Buddhist communities in Indonesia, part of the legacy of the Majapahit era. Image courtesy of DEV

Unlike the ethnically Chinese Buddhists in Jakarta, most of these distant Buddhist communities are comprised of non-Chinese residents, with many coming from disadvantaged backgrounds. While Buddhists make up less than 1 percent of the population in this most populous Muslim country, these non-Chinese Buddhist communities serve as a reminder of the rich Buddhist influence in this region, like the magnificent Borobudur, considered the largest Buddhist monument in the world.

DEV’s support for these distant Buddhist communities plays a significant role in keeping their Buddhist traditions alive. In many of these villages, the temple is the heart of the community, a place where villagers come for more than religious needs. However, over time, due to a lack of funds, many of the temples are now in poor condition and in need of repair. One such example is the Cetiya Gili Loka Pala in Central Java. With funds from DEV, the temple now has new quarters for the monks. 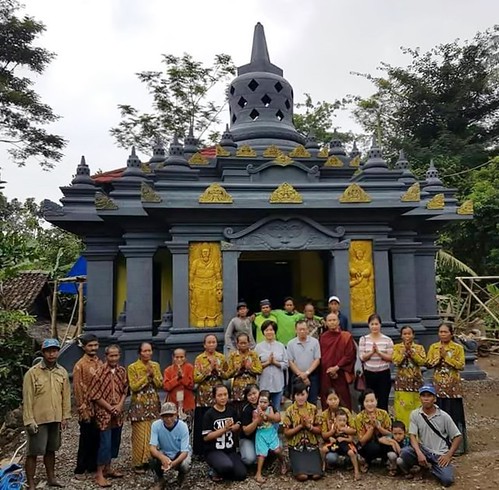 Rejoicing at the opening of the new monks’ quarters, Nathalia explains: “In Buddhism, making offerings to the sangha is the highest meritorious deed. It is a great blessing to be able to build a kuti in the village cetiya because the monks play an important role in guiding the villagers to have faith in the Buddha, Dhamma, and Sangha. By restoring the temples, we hope that Buddhism can continue to flourish in these remote villages.”

Those inclined toward the view that the true practice of Buddhism should be directed at such lofty achievements like the attainment of wisdom and the final goal of liberation, might not appreciate DEV’s approach with its emphasis on dana and the pursuit of merit (Pali: punna), or even feel disdainful, particularly if one is doing it for mere worldly gain. But whatever the motives for giving, the act of dana itself is a praiseworthy one exalted by the Buddha himself. As the first of the Ten Perfections, generosity brings with it many benefits, both in this life and in the  hereafter, as stated in the suttas: “These are the five rewards of generosity: one is dear and appealing to people at large, one is admired by good people, one’s good name is spread about, one does not stray from the rightful duties of the householder, and with the break-up of the body at death, one reappears in a good destination, in the heavenly worlds.”*

Reflecting on the work of Dana Everyday, Bhante Kamsai, chief abbot of the Buddha Dhamma Arama comments: “Despite its historical past, Buddhism in Indonesia today is at a young stage. The truth is most people are too pre-occupied with worldly affairs and are not ready to dedicate time to practice. Or they have little interest. DEV is like a bridge for people to reach the Dhamma. This merit-making can help build a strong foundation for Buddhist practice. By giving with the right motivation, they open their hearts and develop kindness and compassion. Through giving, they learn to let go of clinging. With enough merit and good karma, when the time is ripe, whether in this life or the next, they will then have the chance to learn the Dhamma and attain nirvana.” DEV conducts field trips to a poor Buddhist communities outside Jakarta to assess their needs. Image courtesy of DEV

* Merit: A Study Guide by Thanissaro Bhikkhu; AN 5.35 (Access to Insight)

The Compassionate Relief of Tzu Chi – Inspiring Great Love in the United States and Around the World
Nurturing the Roots of Chinese Buddhism in Africa
Reviving the Bhikkhuni Sangha in Indonesia: an Interview with Ayya Santini