His Holiness Karma Kuchen at the Palyul Center Bulgaria. Image courtesy of the author

For centuries, the profound wisdom of the Buddha has been spreading to different parts of the world. The dissemination of the Buddhadharma draws a unique spiritual trajectory between the Land of Snow (Tibet) and the Land of Roses (Bulgaria).

Tibetan Buddhism gained popularity in Bulgaria after the visit of His Holiness the Dalai Lama, in the early 1990s. Subsequently, Tibetan Buddhism became the most popular form of Buddhism in Bulgaria. The four schools of Tibetan Buddhism—Nyingma, Kagyu, Sakya, and Gelug—along with the Bon tradition are present in the East European country. The oldest Tibetan school, the Nyingma tradition, is represented by three of its six lineages: Palyul, Shechen, and Dzogchen. At present, only the Palyul tradition continues to grow, gaining popularity among Bulgarians. The most active Tibetan Buddhist center in Bulgaria is the Palyul Center, founded by Pema Rinpoche (Khen Rinpoche Pema Choephel). The first lecture of His Holiness Karma Kuchen in Sofia. Image courtesy of the author

The Palyul Center is named after Palyul Monastery in Tibet, one of the six great “mother monasteries” of the Nyingma school, or “ancient translation tradition.” The monastery was founded in 1665 in Kham, eastern Tibet, by Kunzang Sherab, the first Palyul throne-holder. Until his passing in 2009, the late Penor Rinpoche, the 11th throne-holder, carried out the preservation and dissemination of these esoteric teachings in the mother and branch monasteries inside and outside of Tibet. There are now numerous Palyul centers in Asia, Europe, and North America.

In 2002, Pema Rinpoche established the Palyul Meditation Group in Sofia after his first visit to the country. Pema Rinpoche was born in Kham, and completed his monastic education at Namdroling Monastery in southern India under the guidance of His Holiness Penor Rinpoche. In 2011, he founded the Palyul Center Bulgaria as part of the Palyul Dharma Center global project founded under the patronage of His Holiness Penor Rinpoche, which includes various Tibetan Buddhist centers of the Palyul tradition in Europe. The official opening and the consecration of the Palyul Center in Sofia by Pema Rinpoche took place on 29 April 2012. Soon after the consecration, the non-profit organization Palyul Center Bulgaria was established. The center offers Buddhist training and is frequently visited by Pema Rinpoche and his assistants Khenpo Dawa and Lama Dawa Norbu, as well as other Palyul teachers like Chogtrul Rinpoche, Khenpo Sange Rangjung Rinpoche, and Khenpo Tenzin Norgay Rinpoche. 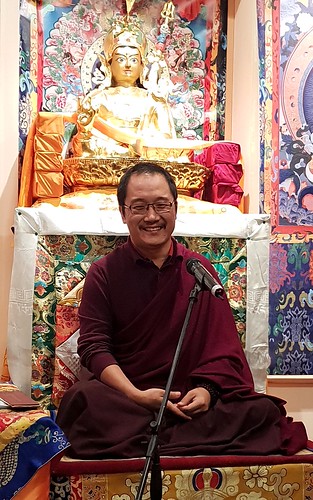 The flourishing of Palyul in Bulgaria culminated in the end of November 2018 with the visit of His Holiness Karma Kuchen Rinpoche, the 12th throne-holder of the Palyul lineage. This historic visit drew a large number of Bulgarians and was a great success.

Karma Kuchen Rinpoche was born in southern India and was recognized at an early age as the reincarnation of the fourth Karma Kuchen Rinpoche, Karma Thegchog Nyingpo, by His Holiness Dujom Rinpoche and His Holiness Penor Rinpoche. After his recognition, he was invited to Namdroling Monastery, where Penor Rinpoche provided him with a religious education and in 1994, appointed him as the head of Palyul Monastery in Kham. On 14 August 2000, Karma Kuchen Rinpoche was enthroned as the 12th throne-holder of the Palyul lineage. He has built many temples, stupas, prayer wheels, images of deities, and other objects of veneration, including a magnificent temple within the monastery premises, under the direction of Penor Rinpoche. Medicine Buddha empowerment in Sofia. Image courtesy of the author

Since 2003, Karma Kuchen Rinpoche has traveled to many countries, bestowing empowerments, teachings, and instructions. In 2018, he visited Bulgaria for the first time as part of his teaching program in Europe, which included teachings and empowerments in the United Kingdom (15–20 November), Switzerland (21–22 November), Germany (23–24 November), France (25–26 November), and Greece (1–2 December). His program in Sofia, held from 27–30 November, was organized by the Palyul Center Bulgaria with the help of Pema Rinpoche and his assistant Khenpo Dawa, who co-ordinated the European program of His Holiness.

On 28 November, Karma Kuchen Rinpoche gave a lecture on “Altruism and Compassion in the Modern World” at the House of Science and Technology. This profound lecture along with the magical chanting of Pema Rinpoche touched the hearts of many. On 29 November, the holder of Palyul lineage bestowed a Medicine Buddha empowerment at the Central House of Architects. The empowerment was from the Namcho (Space Treasure) Cycle, revealed in the 17th century by Terton Migyur Dorje. It was given in an authentic manner to a large group of people. On 30 November, Rinpoche visited the Palyul Center Bulgaria and gave refuge vows after explaining the meaning of this essential aspect of the Buddhist path. He also gave an oral transmission (Tib: lung) of two important for Palyul lineage practices: Namcho’s Preliminary Practice (Tib: ngondro) and Shower of Blessings: A Guru Yoga Practice to Accompany the Seven Line Prayer, written by the great Nyingma master Mipham Rinpoche.

The compassionate words of Karma Kuchen Rinpoche reached the hearts of many Bulgarian people thanks to the brilliant translation of Daniela Hartmann (from Tibetan to German) and Javor Konstantinov (from German to Bulgarian).

At the end of his program, His Holiness expressed his happiness at being able to visit Bulgaria and his hope of returning to meet Bulgarian Palyul students. They also expressed their sincere hope to that they would able able to welcome the esteemed lama once again. Thus, during the cold winter days the seed of Buddhadharma blossomed like an enchanted rose in the snowy land of Bulgaria.

Along the Path of the Buddha: Buddhism in Bulgaria
The Way of the Bodhisattva: A Tribute to Prof. Alexander Fedotoff​
Connecting Art, Women, and Spirituality, with Lyudmila Klasanova of Sofia University