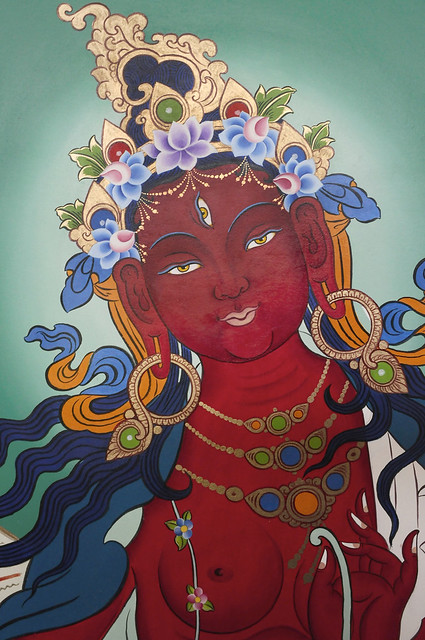 What are those beings that appear to us like thunder—suddenly, unexpectedly, intense, frightening, shaking our souls and penetrating the thin skin of our minds?

I ask myself this question sometimes, when I catch a split-second glimpse during an unexpected encounter, an inexplicable coincidence, those baffling situations that most of the time we prefer to simply avoid. To escape such encounters, we shy away from catching a stranger’s eye, we shun dark places, we hide inside our own voices so that no unknown wanderer questions us or gets in the way of our important missions for the day.

We do not welcome unexpected strangers talking to us or asking about our private lives as if they were dirt roads along which they could walk barefoot. Who are they, who simply appear as suddenly as thunder? Sometimes they come with their warm breath, seducing us to look at them while we feel goosebumps prickle behind our ears. Sometimes they simply appear horrifying, catching us as we jump away, grasping onto us by a toe.

I have learned these beings are known as dakinis. When I hear about them at teachings it’s so hard to imagine their form or to simply understand and explain them! But instead I can simply narrate some encounters that I know were with dakinis, who spoke to my soul and who cut the root of my ego. Knowing them, I can confidently say that they didn’t know or they didn’t call themselves dakinis, yet they manifested the essence and the aspect of wild feminine wisdom.

When this energy manifests, their own personality is put aside and the dakini speaks, dances, talks, looks. This energy can manifest in all of us . . . every time we get “out of the way.” It can manifest through a man or a woman, but its essence is wild feminine wisdom. It’s not an entity, but something that awakes within us when we touch unknown corners of our consciousness.

As an artist, I try to connect with this corner of my inner self, the dakini wisdom, at the precious moments of creation, which is so often inconvenient, irreverent, wild, fearless, provoking . . . because it is “she” who questions, breaks the old, the used, the addicted, the censured. She sees beyond, jumps, reveals, and keeps embraced, while our little selves construct walls around us for protection from illusory fears and insecurities. The bigger our walls, the less we can see beyond them and the less we are able to reveal to the world.

I have wondered to myself, would I be able to recognize a dakini? To the eyes of the Buddha everything is light; everything is already enlightened and perfect. I deeply wish to be able to “get out of the way” with my little things and remove the veils obscuring my vision—I wish to see for real. In November last year, I had the great pleasure of traveling from my home in Brazil to expand my studies in Oriental art through a one-week workshop on Islamic geometry at The Prince's School of Traditional Arts in London. On the last day of this wonderful workshop, I took a red bus to the London Underground on my way to the airport, weighed down by my luggage. I asked the bus driver to tell me at which stop I should alight. Immediately a female voice replied, offering to let me know. I looked around to see an elegantly dressed black woman in her mid-50s and I move my heavy bag to stand beside her.

She stared openly, patiently taking in my appearance before finally asking where I was from. I replied shortly. We engaged in a little small talk, then she stared again, her eyes wide. She was calm, her breathing deep, and her face serious. She whispered something I didn’t quite hear. She asked me to come closer so that her thick lips could move no more than necessary. I leaned in and she whispered: “If you die today, who would be the first to know?”

My spine stiffened and I drew in a sharp breath of cold air as a million thoughts raced through my mind: “She wants to scare me and kill me!” “She knows where I’m going!” “She’s predicting my future . . . the plane will crash!” “I love and fear airplanes!” “Gosh . . . I’m always taking chances!” “Will she perform voodoo on me?”

These thoughts annoyed me, and in the same moment I asked myself why I was choosing to indulge in such notions. I recalled the words of Dzongsar Khyentse Rinpoche: “Dakinis are inconvenient.” I mustered the composure to reply in a lighthearted tone, “I don’t know ma’am. Perhaps God would be the first?”

Her facial expression was unchanged as she nodded and gestured with her finger for me to come closer again. I swear her voice had the same earthshaking thunder as Nina Simone . . . oh my God! “And if you would die today, who will have your goods?” she asked.

What the hell? I thought to myself. Is she going to rob me?

“Me?” she asked. Her wide open eyes continued to stare, their intensity making me catch my breath. “I fear . . . I fear my sons are just waiting for me to die to get their hands on my things.”

I realized, in her rare look, that she was a woman who felt too much and that her body carried a soul who could barely fit inside. Something about her posture conveyed that. I trusted my feeling and provoked her further: “But when you die, it doesn’t matter who has all your goods, right?”

“Indeed girl, it does not matter. What matters is if they love you or love you not.” Eye to eye, the diva did not blink. In her gospel, slow, and grave voice she continued: “But do you know what is really the most important? Do you really know? I’ll tell you what is most important in this life—it is to know who you really are!” 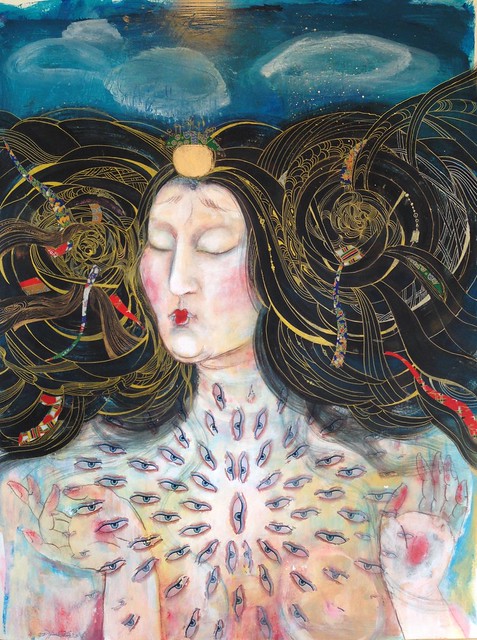 My heart felt warm next to the fire of her spirit. I could see the flames in her eyes, and in the rhythm of her words. I entered her dance and asked, “Do you know who you are ma’am?”

There was a pause. A look. She slowed time with a weight that only certainty can move. “Ooooooh yeeeeah, I know.”

That encounter healed my heart. Yet, conversely, after my previous meeting with a dakini, I could not stop crying. Just a year before I made that trip to London, the performance artist Marina Abramovic came to Brazil. She is an artist I deeply admire; she becomes art, a step beyond merely making art, from my point of view as a painter. For a few nights during her visit she would give a talk at the end of which she would answer a few questions from the public. I prepared myself for weeks, indeed I had waited for such an opportunity for years. I wrote my question on a piece of paper, but just the thought of talking to her made my heart race. She was my inspiration, my diva. I put together two of my books, photos of paintings, a letter, and crystals as presents for her.

Finally I was there and, after hearing her inspiring talk, I was the first in line to ask a question. I was the first also because I was so nervous that if I had not jumped in, I might have lost my nerve altogether.

When I was handed the microphone, ready to read my question in English, the organizers asked me to say it in Portuguese and requested that I be brief as the night was short. In my nervous state I became quite disoriented, as if I was in a kind of trance. I began to speak, babbling about how much we both had in common, the vision of art, body, and how I did this and that, until finally she interrupted me and asked, “What was your question again?”

I melted inside my own static body. I could feel the tense and inpatient looks of the audience. I stuttered my question and she replied briefly. I was at least able to hand her the gifts. She gave me a hug, which turned me into an image of SpongeBob SquarePants, absorbing all of her vibrations.

I quietly returned to my seat next to my husband. He didn’t look me in the eyes, but inhaled sympathetically. His rare and subtle reaction, which is always supportive, made me understand that I had just screwed up. My heart crumpled inwards like a useless piece of paper tossed into the trash. How arrogant, stupid ,and childish I was! Why with her? Why today? Why in front of more than 1,000 people, on live TV and streaming video? I cried for days. Who was this person who behaved in that way? When am I going to have such a chance again? What I was really longing for was that she would hold me in her arms, tell me how special I was, and teach me. Funnily enough, she didn’t do anything; she was simply herself. So shame on me, there were no excuses for my expectations! 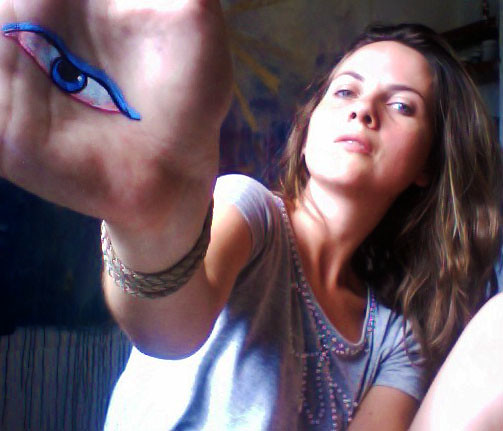 It was a lesson. And with it I felt as when we are in front of our true master—the master with whom we are connected. It makes us totally naked; no masks, no make up, not nice mostly. It’s as if we lose the capacity to sustain the artificial energy for any sort of mask. The master, with no effort or even apparent intention, to your shock, destroys it. After all, you came with an open heart, and open hearts can be transmuted. Closed hearts are not easily hurt, closed hearts are not transformed in this way.

But when this happens, there’s no admiration, glory, or applause. The dakini does not glorify your ego, your masks, your “good deeds” or merits. She is there to question you again and to check whether you stand on your own feet. Because all that stands by itself naturally makes no effort to be sustained. There is effort in dressing, in sitting in the lotus, in being good even, but when you are truly transformed, it comes from your essence and there is no effort. The dakini is the one who checks this source of your true self. She talks to your bones.

And the path of the Dharma artist is such; to become what he or she believes. Not only reproducing exterior artifacts, but truly discarding what is not and revealing its true nature.

My gratitude to all the dakinis I fear and love.