One of my first interviews as a journalist was with Venerable Matthieu Ricard, a Buddhist monk, founder of the Karuna-Shechen non-profit humanitarian organization, and a prominent contemporary Buddhist thinker on happiness. I first met Matthieu on 8 September 2012, almost immediately after I had returned to Hong Kong from studying in London and started writing full-time for Buddhistdoor. Ven. Matthieu was exhausted from jet lag at the time, following a long-haul flight, but our conversation in his sleepy and fatigued state, far from disappointing me, helped to humanize him in my eyes. And thanks to hearing more about him from the perspective of his good friend Shveitta Sharma, I quickly learned that even larger-than-life public figures such as Ven. Matthieu are also flesh and blood.

Shveitta is an Indian-born resident of Hong Kong who, following a series personal tragedies many years ago, decided to turn the philosophical questions about life that were troubling her into a dogged full-time pursuit of what it means to be truly happy. Since my first meeting with Ven. Matthieu and Shveitta four years ago, she and I have also become close friends. That encounter was also the first time I heard her self-conferred job title, “Chief Happiness Officer”—a role that, quirky as sounds, she takes very seriously.

Over the years, I’ve observed Shveitta expand her roles as a public speaker and happiness coach in Hong Kong, and as an “ideas and speaker curator” for TEDxWanChai, the city’s branch of the TEDx organization. She has spoken with an impressively diverse range of people from around the world about their perspectives on happiness, from spiritual gurus to global business leaders. She is also working on founding a “school of happiness,” which she hopes will function as a think-tank, bringing together teachers, speakers, and facilitators of happiness for the benefit of audiences in Hong Kong.

There are certain distinct differences to being a master’s friend rather than a follower, or even a close disciple. Real friends allow us to express a side of ourselves that we can’t always comfortably expose to others. These aren’t necessarily weaknesses or the darker aspects of one’s psyche, simply facets that expose a possible vulnerability: a silly opinion, a childlike fondness for cute trinkets or a hobby, an appreciation of toilet humor; these little human quirks, while nothing to be ashamed of, aren’t always socially appropriate and can engender unpredictable reactions from people who may not know us well, even those who would otherwise respect us. A friend, however, can bear witness to such peccadilloes, aspects of one’s personality that even a master might not wish to share with his disciples—even someone as honest and fearless as Matthieu Ricard.

“How I met Matthieu is interesting,” Shveitta related to me when we caught up recently. “In 2008, I attended a conference in Sydney about happiness and its causes. The two-day conference had amazing speakers and Matthieu gave the keynote. This conference was followed by a fundraiser dinner for Karuna-Shechen. At the dinner, I had a chance to speak with him and learned that he was flying to Hong Kong on the same flight as me. Somehow, I managed to sit myself next to him on that eight-hour journey and I remember really chewing his brain on the subject of happiness and how to attain it.

“I really wasn’t in a good place mentally or emotionally at the time. So having him counsel me for almost seven hours was a real blessing. He handled me for the whole flight while translating a Tibetan text into English and taking a nap from time to time,” she laughed, recalling how Ven. Matthieu must have felt dealing with her outgoing and down-to-earth personality. “I reckon he was just too polite to tell me to shut up and I chose not to take any hints!”

By the end of the flight, Shveitta had exchanged numbers with Ven. Matthieu and became his unofficial driver in Hong Kong (she also offers the same service to several other spiritual teachers when they visit the city).

One memory that is particularly vivid in Shveitta’s mind is how reverently Ven. Matthieu treated his mother. “I remember clearly the first time I heard Matthieu speak with her over the phone,” she recalled. “I was taken aback as I observed him: the tone of his voice, his choice of words. Here was this world-famous, 60-plus-year-old man who goes by the moniker of ‘happiest man in the world.’ Mere mortals like us admire and revere him. Yet who does he love, respect, and admire? His mother. I thought that was as sweet and as human as it can get. No sham or PR, just a son loving his mother.” 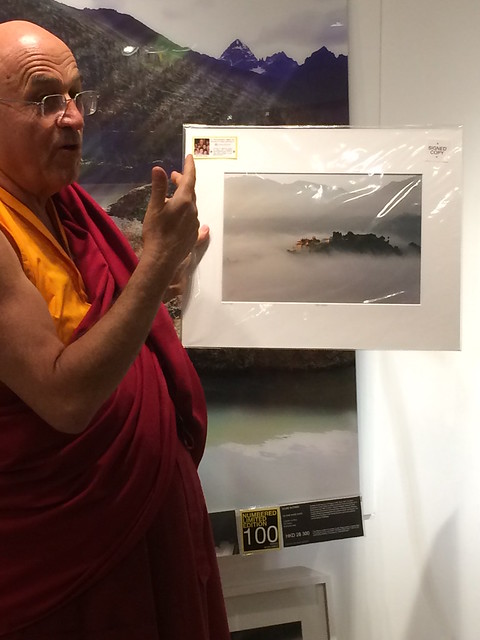 Shveitta and Ven. Matthieu meet for tea every time he returns to Hong Kong. “Personally, I love spending time with him, as I always learn something new,” said Shveitta. “Somehow my interaction with him is always very light and casual, but at the same time very enlightening. I respect him and his teachings immensely but I also see him as a human with the same frailties as you and I. He jokes, he laughs, he gets angry and frustrated, but the key difference I see in him is that he recovers quickly and goes back to that even, calm state.”

Perhaps what draws Shveitta to Ven. Matthieu (and vice versa) is their shared affinity for the truth behind happiness as well as a certain kind of lightness. “Almost all of my favorite teachers, regardless of background or tradition, have a kind of lightness about them,” she told me. “This is especially true of Matthieu, who I’ve had the fortune of getting to know slightly better than some of the other masters. Matthieu has a wonderful sense of humor. He imparts his teachings in such a wonderful and light manner that the message comes through simply and easily. He is very human. There is no heaviness about him.”

Shveitta acknowledges that she has had disagreements with him as well, as Ven. Matthieu, who holds a PhD in molecular genetics from France’s Pasteur Institute, is more skeptical than Shveitta towards what he sometimes dismisses as pseudoscience. One point of debate between them was the validity of the late Masuro Emoto’s (1943–2014) claim that human consciousness can affect the molecular structure of water. “I’ve argued with him on other points and usually he does win. After all he is way more connected to himself than I am!” she observed. Where Shveitta and Ven. Matthieu do largely agree, however, is about his views on happiness: “The common saying goes: ‘Become selfless for very selfish reasons.’ All our acts, emotions, and energies add to the collective. Having people like Matthieu on our planet is hugely beneficial to us. His very presence raises the positive energy of our world, yet that’s not to say that we can’t contribute to this positive energy too. We all have the capacity to be as happy and helpful as Matthieu,” she noted.

Shveitta doesn’t identify as a Buddhist or with any particular religion, instead seeing herself as a free seeker bringing together teachings that she feels are beneficial and applying them to her daily life and her work. While she might not agree with everything taught by Buddhism, her conclusions about desire and delusion align closely. “Our unhappiness stems from our inability to accept things as they are. When life events don’t match our expectations, we become unhappy. Happiness is our default setting but we’ve forgotten that and we spend our entire life trying to find the happy switch, not realizing that instead of turning on the happy switch all we need to do is turn off the unhappy switch,” she said with conviction. “I’m not there yet, but with constant reminders like Matthieu’s guidance, I see it as a work in progress. I’m blessed and so grateful for the presence of such teachers and friends in my life and I hope to follow in their footsteps.”