We suffer sometimes, don’t we? C’mon, own up. Cut the bull.

Sure, we dance and sing and laugh when we get Rickrolled. And we suffer too, for a thousand and one different reasons. But one of the most helpful of these reasons just so happens to be one of the simplest: we suffer because we believe unhelpful thoughts.

I don’t think this is the One True Cause of suffering. I don’t think it explains the rise of white nationalism, the prevalence of sexual misconduct, or Donald Trump’s orange skin. But I do think it’s incredibly helpful and I’m certainly not alone in thinking this.

The same basic insight lies at the heart of some of the most empirically validated contemporary psychotherapy modalities (such as acceptance and commitment therapy [ACT], cognitive-behavioral therapy [CBT], and schema therapy). It can also be found at the very foundation of many of the wisdom traditions of the world (such as Buddhism, Stoicism, and Inside Out).

Wait, Inside Out? Yup, the Pixar movie Inside Out. Yup-yup.

About half way through the movie there’s a touching little scene that communicates this simple-yet-profound idea as well as anything else I’ve come across. Remember the scene where Sadness, Joy, and Bing Bong—all characters who make up the psyche of an 11-year-old girl named Riley—are riding a literal “train of thought” and Joy gets so excited she accidentally knocks over a couple of cargo boxes? One of these boxes is labeled “facts” and another is labeled “opinions,” and all the tiles of facts and opinions inside them spill over the floor and get mixed up.

“Oh no,” Joy laments. “These facts and opinions look so similar.”

Bing-Bong shrugs it off nonchalantly: “Ah, don’t worry about it,” he says. “Happens all the time.” And while he’s talking, he mixes up a bunch of facts and opinions and casually dumps them all into the box marked “facts.”

As most of us do.

Because, let’s be honest, we all have an inner Bing Bong, don’t we? I certainly do. As a matter of fact, about two sentences ago my own personal Bing Bong confused this opinion for a fact: nobody really gives a shit about these articles I write.

Now I know what you’re thinking: Seth, that’s true. I’m only reading this article because if I don’t, I know you’re going to give me the ol’ stink-eye next time I see you.

Now, I don’t know if that’s what you actually thought, but I know for sure it’s what I thought. And experience has taught me what will happen if I go on mistaking that thought—that opinion—for a fact: I’ll stop writing for a few seconds. Or months . . . or years. And during that time I’ll suffer because I won’t be doing one of the things I most want to be doing with my precious human life: writing stuff that might be helpful to other human beings who suffer like I do (which, last time I counted, was to varying degrees approximately everyone).

It always costs us something when we buy into an unhelpful thought. You can observe it every time. Sometimes the cost is small—you clam up, you shoot poorly, you skip the party—and all you feel is a little sting, like the light zap from an electric fence. But sometime the costs are much higher: broken relationships, small life, hiding out, addiction. These are the kinds of costs that tend to show up when we confuse these sorts of opinions for facts: I’m useless. I’m unworthy. I can’t. They’ll hurt me. They’ll leave me. I’m special. You owe me. It’s my fault.

After my mom died, my nephew asked my brother if she died because he had lice. He was eight years old at the time. I, on the other hand, was 37. The morning I got the news, the ink from a red pen leaked all over my hand. I couldn’t stand the sight of the ink on my fingers, but try as I might I couldn’t manage to wash it off. I later realized I had blamed myself for my mom’s death. I could have saved her. There was blood on my hands.

Things happen; events occur. Big events, little events. And our minds hand us opinions about the significance of these events. They attribute meanings to these events. Because that’s what minds do. If they didn’t, we wouldn’t exist and couldn’t cross the street. Some of these thoughts are extremely unhelpful, yet we confuse them for facts. We get entangled in them, swept away, wrapped up, hooked. And we believe they are what they say they are: the truth. About us, others, the world, life, men, women, the future, Tupac, and Biggie. And this either causes us to suffer or it amplifies our suffering.

In this sense, no matter how young or old we are, we’re all a bit like Bing Bong. Or Harold and his Purple Crayon. In the classic kids story, after Harold uses his imagination to draw an apple tree, he decides he needs something to guard its delicious red apples, so he draws a frightening dragon underneath the tree. Unfortunately, the dragon he draws (with his own imagination!) is so terrifying that he backs away from it, trembling, and then stumbles into the ocean and nearly drowns.

As the Stoic philosopher Epictetus said, “It is not events that disturb people. It is their judgments concerning them.”

For most of Inside Out, the specific judgment or opinion that Joy confuses for a fact is that sadness is an irritating emotion serving no real function. And because she relates to this opinion as a fact, it dictates her actions.

In the scene right before the one we looked at above, Bing Bong loses his beloved rocket-wagon and feels really sad. Like gutted, forlorn, desolate. But Joy has no time for this. Why? Because she has confused her opinion about sadness for fact. Since, in her view, sadness is a nuisance that needs to be solved and gotten rid of, she half-heartedly tries to cheer up Bing Bong by distracting him with some silly faces, tickles him, and does a pretty tight little moonwalk. But it doesn’t work. In fact, it makes things worse. Bing Bong slumps; he hunkers down; he goes boneless.

It’s like that, isn’t it? When someone has no time for what we’re feeling, we tighten up on the feeling, we clutch at it and keep coming back to it like a cut in the mouth. Yet we do the same thing inside ourselves all the time. Which is, of course, what’s really happening in this scene. Joy’s not doing this to Bing Bong; Riley’s doing it to herself.

Siddhartha Gautama noticed this same phenomenon around 2,500 years ago. In one of his most famous discourses, he drew a distinction between two types of feelings—bodily feelings and mental feelings—which he likened to two darts or arrows.

Suppose they were to strike a man with a dart, and then strike him immediately afterward with a second dart, so that the man would feel a feeling caused by two darts. So too, when the uninstructed worldling experiences a painful feeling, he feels two feelings—a bodily one and a mental one.

When Bing Bong loses his beloved rocket-wagon, he gets hit by the first dart, the dart of painful feeling. He feels sad. But then, to make matters worse, he gets struck by a second dart, the dart of mental feeling. In Inside Out that dart’s name is Joy. Gautama defines the second dart as “aversion toward painful feeling,” which is exactly what Joy personifies in this scene: Riley’s aversion to her own feelings of sadness. The joyful part of Riley won’t let Bing Bong feel what he’s feeling; instead, she tries to cover up his sadness by plastering a happy face all over it.

Which, again, is exactly what Gautama noticed we usually feel after we’ve shot the second arrow into ourselves. He specifically says that when we are “uninstructed,” or don’t know any better, “aversion toward painful feeling” usually prompts us to “lust for pleasant feeling.” This is precisely what Joy does. Driven by her aversion toward the painful feeling of sadness, she “lusts for pleasant feeling” by trying every trick in the book to cheer up Bing Bong and get him to feel good instead of simply allowing him to feel good. 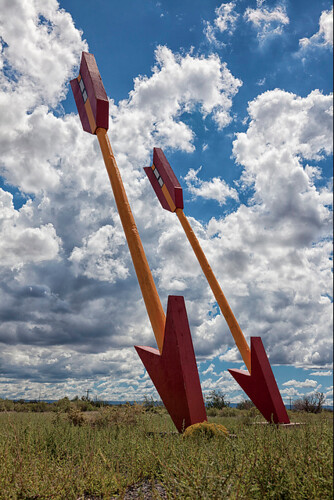 One dart is better than two

Shinzen Young has a simple formula that captures the basic logic of this process:

But hey, look on the bright side of the dark side: at least the 8/10 Pain is primary pain, original pain, clean pain. Not suffering or secondary pain that has been multiplied or amplified or dirtied by resistance or struggle or avoidance. Or, to put it in terms of Gautama’s metaphor: one dart is better than two.

Suppose they were to strike a man with a dart, but they would not strike him immediately afterward with a second dart, so that the man would feel a feeling caused by one dart only. So too, when the instructed noble disciple experiences a painful feeling, he feels only one feeling—a bodily one, and not a mental one. (Bodhi 1994, 31)

In a way, Gautama is saying exactly the same thing as Inside Out, which is that when we don’t relate to our opinions about our “negative” emotions as facts, our lives run much more smoothly. I find it hard to disagree with this. Have you ever been hit by an actual dart? I have. It kills. But it doesn’t hurt nearly as bad as being hit by two darts. And if I was a Vegas bookie, I’d lay pretty good odds that given the choice between being impaled by one dart or two, most people would choose one.

Ultimately, in Inside Out, Sadness chooses one dart. Unlike Joy, she is not averse to Bing Bong’s grief. Instead, she is curious, accepting, empathic. Rather than trying to trick him into getting over his emotions, she encourages him to get with them and simply allow them, open up to them, make space for them.

“I’m sorry they took your wagon,” she says. “They took something you loved. It’s gone. Forever.” Man up? Own up! Bing Bong is about to die and he knows it.

So instead of stabbing him with a second dart like Vincent Vega stabs Mia Wallace in the heart with an adrenaline shot in Pulp Fiction, Sadness just tends to Bing Bong’s first dart. Rather than distracting him from his grief and loss, she helps him go deeper into it and, by experiencing it fully, complete it.

There is a warm detachment to the way she does this that we also find in Gautama’s teaching on the two darts. The “instructed” person, Gautama says, “feels one feeling, a bodily one, not a mental one.” But he also says that “when he feels a painful feeling, he feels it detached.” (Bodhi 1994, 31) In other words, he doesn’t get all swept up in it or carried away by it. He feels it detached, with love. Like how Sadness is with Bing Bong.

Then, after spending a few seconds feeling what’s there to be felt, Bing Bong cries a bunch of candy tears. Why? Maybe because there’s something sweet and rewarding about simply allowing ourselves to experience—in a no-big-deal kind of way—exactly what we’re experiencing.

Bodhi, Bhikkhu. 2005. In the Buddha’s Words; An Anthology of Discourses from the Pali Canon. Somerville, MA: Wisdom Publications.

Meaning in the Face of Transience: Reflections of Socially Engaged Buddhists in Japan
Going to “the Place that Nobody Wants to Go:” Pema Chödrön and Moana
“What If” Wonder Woman
Buddhistdoor View: Buddhist Dimensions of Inside Out