During my years of watching and analyzing the Buddhist world, one observation has consistently come to mind: Buddhists have been slow to make art for art’s sake. To be sure, morality rightly colors what we do as Buddhists. Buddhists should also not make art carelessly, as art has the ability to affect people either positively or negatively. Perhaps it is my secular upbringing that has conditioned my presupposition that world-class contemporary fiction and poetry should allow for moral failure in their protagonists—a reality which Buddhists generally prefer not to address.

Buddhists aim to practice but also impart the Dharma, which makes certain tropes compulsory (a protagonist should generally progress in moral character and a villain should never triumph without paying a significant price) while rendering others unusable (Buddhism can never pull off an irredeemable character or a tragedy in the classical sense). Buddhists are not bad writers per se, but the tradition seems to restrict them by disapproving of art that serves no morally beneficial purpose. Can we ever escape this Gordian knot?

It is to Buddhist writers like Ramya Jirasinghe that I look for answers to these conundrums. The question of whether Buddhist thought has anything to offer literary circles has also been a preoccupation for this poet from Sri Lanka, who told me: “At the deepest level of Theravada Buddhist practice, where you are working at letting go of attachment to death and rebirth, I find that the modern process of artistic creation that is usually so inextricably linked to the self and the identity of the creator does not complement the practice.

“Artistic creation and working through the Eightfold Path can’t be linked as they have contradictory goals and processes. If a writer can operate from a place of the practice, I think the best contribution to literary circles would be less in the creative work but more in the interaction with others. A writer who is embedded in the real Theravada practice would be driven less by the artistic ego and more by the forces of equanimity, kindness, and generosity and will be able to create a space to nurture and encourage others’ writing and growth.”

I could not resist asking her if this basic disconnect is why Buddhists have been relatively slow to make use of the media of poetry, prose, and storytelling. “Raymond, you are absolutely right,” she agreed. “Even if you are writing fabulous poetry drawn from Buddhist or spiritual themes, as seen in the work of Jane Hisrchfield and Mary Oliver, when you are creating a work of art, you create from the space of a self. On the other hand, if you are deeply embedded in the practice of the Eightfold Path, then gradually, the need or the desire to create (which is primary to the act of creating) will wane, especially for art’s own sake. This is not unique to a Buddhist practitioner. After all, secular art is a relatively new product made possible by the European Enlightenment, when the identity of the individual in society superseded our spiritual identity.”

Currently, Ramya works as deputy director at the United States – Sri Lanka Fulbright Commission. She’s also completing a PhD, which is shaped around very visceral social justice concerns unique to Sri Lanka. Her first book of poetry was There's an Island in the Bone (2012). Earlier, she was longlisted for the Fish Poetry Prize of Ireland in 2011 and was a joint runner-up to the UK’s Guardian Orange First Words Prize of 2009. Scholars and poets from Sri Lanka (and more broadly, South Asia) fill an important gap in English-language Buddhist poetry. Western-born writers can produce excellent poetry that grasps the deep truths of Buddhism, but poets like Ramya can capture an even broader spectrum of Buddhist experiences: specifically, the postcolonial context and the experience of Sri Lanka and India as repositories of perhaps the oldest forms of Buddhism.

As I interpret her work, her verses are packed with sights, sounds, and smells and marked by sensuous and earthly images. Yet the words don’t crowd one’s brain but flow effortlessly like an unimpeded river. “The natural world, the body, and food appear to be so much a part of my writing. I think ultimately, whether we like it or not, we are the result of all our past experiences, so what was a part of our lives in our childhood rises, at times unconsciously (maybe even against our will), to the surface in the writing process,” she said. 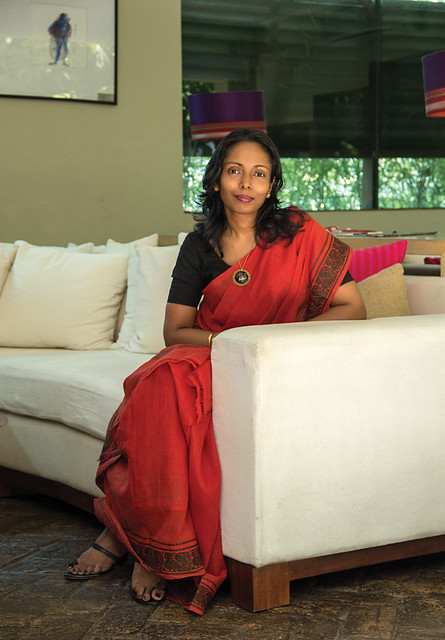 “The natural world, the body, and food appear to be so much a part of
my writing. I think ultimately, whether we like it or not, we are the
result of all our past experiences, so what was a part of our lives in our
childhood rises, at times unconsciously (maybe even against our will),
to the surface in the writing process,” says Ramya.

A free-verse writer, Ramya has loved books since childhood, a passion which evolved into an interest in poetry. “Writing itself has always been there in me from the start, from when I was in my pre-teens and I was writing to Sri Lanka’s Evening Observer children’s page. My parents’ home had books owned by my great-grandfather and by an old, retired Welsh military officer who lived with us, and there were shelves and shelves of books left behind by a grandaunt of mine.”

The library held volumes written by the greats of the English pantheon: Chaucer, Wordsworth, Milton, and Shaw, as well as detective stories from the 1930s–’70s such as Father Brown and Maigret. Ramya also nourished her curiosity and wanderlust with books on travel, forensics, and astrology, and bound publications from The Times of Ceylon. “This was a wonderful, eclectic collection of books, which I converted into a home library by cataloguing them and labeling them.”

Her learning was supplemented by a good dose of naturalism, which furthered her understanding of interconnectedness. “I grew up loving gardens and the outdoors, and food was always free-flowing in our home, and those two link inseparably with the physical senses in that the body gets incorporated into the experiences surrounding it. So I think in most places I draw from these images and use them as metaphors. Even the title of There’s an Island in the Bone alludes to ‘what’s bred in the bone,’ and was a linking of the world I am part of to my inner self.”

One name she wanted me to remember was Anne Ranasinghe, whom she considers a mentor of sorts. Born as Anneliese Katz in Germany in 1925, she is a Holocaust survivor who married a Sri Lankan professor and has lived as a citizen of the island since 1956. “She was the person who picked me out when I was in my late teens and guided me in my poetry. She is one of Sri Lanka’s greatest poets, my friend, and my critic,” said Ramya. “The part she’s played has been especially important to me in a country where it’s hard to get an honest opinion spoken to your face.”

It’s hard to argue against what Ramya says about Buddhist writing, and there is no “solution” yet, apart from the fact that the show must go on and art must continue being made. “In Sri Lanka, we have been fighting wars for centuries over what conditions us: national, ethnic, religious, and social identities. It would be interesting if writers could in some way incorporate the concepts of anicca [impermanence] and anatta [no-self] into their work. The challenge, however, is to not sound didactic! I think many of our filmmakers have been maestros at incorporating a very Buddhist ethos in their work. I think it is harder to achieve that ethos verbally, without sounding ‘Buddhist.’ ”

So Ramya and I have come full circle. It really is that hard to make good Buddhist writing. But someone will have to do it.