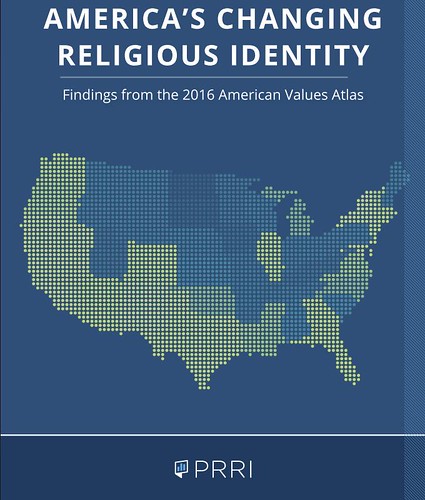 Title page of the PRRI report. Image courtesy of author

The study of Buddhism in America has long been fraught with a seemingly simple question: how do we determine who exactly is a Buddhist? In a recent academic paper, J. Gordon Melton and Constance Jones write, “In assessing the size of the Buddhist community one can begin either with the primary Buddhist associations and centers and their understanding of their membership and constituency, or with individuals and their acknowledged self-identification (the approach adopted by religious polling). When encountering the fuzzy borderland, both approaches offer insights and both are fraught with difficulties.” (ARDA)

Thus, with this month’s release of the largest-ever survey of American religious identity by the Public Religion Research Institute (PRRI), we can ask what insights it offers and what is left out from the data on Buddhism in America. To answer this question, we had a closer look at the survey—which included questions on a wide variety of aspects, from household income, home ownership rates, and marital status, to LGBT status, ethnicity, and political affiliations—with two of the leading scholars of Buddhism in America today: Jeff Wilson, associate professor of Religious Studies and East Asian Studies at the University of Waterloo, Ontario, and author of Mindful America: The Mutual Transformation of Buddhist Meditation and American Culture, and Scott A. Mitchell, dean of students and faculty affairs at the Institute of Buddhist Studies, Berkeley, California, and author of Buddhism in America: Global Religion, Local Contexts. Scott A. Mitchel. From shin-ibs.edu

To begin, the survey follows the second of the abovementioned methodologies: it looks at the acknowledged self-identification of individuals as Buddhists. Both Wilson and Mitchell noted problems with this, referring to the fact that the largest percentage of “unaffiliated” respondents comes from Asian-Pacific Islanders,* Wilson stated, “The sheer concept of belonging to a religion is weaker in Buddhist Asia than in any other major global region. So a significant number of these [unaffiliated] respondents are likely to actually be involved with Buddhist practice in some manner.”

Mitchell likewise noted that because the survey begins by asking respondents to select a single religious affiliation from a list, there is a likelihood that many “of the folks in the ‘something else or nothing in particular’ categories might be ‘Buddhist.’” He continued:

This comes down to a question of what constitutes religious identity. A fixed religious identity is an inherently Christian idea, one that doesn’t make a lot of sense in other times and cultures, especially in Buddhist ones. Another way to look at religion is to set aside belief and examine the question of behavior. Is someone who engages in practices or rituals that are connected to or derived from Buddhism a Buddhist? Do they have to profess a specific Buddhist identity? In saying “I am Buddhist” do I have to also say “I am not Taoist”? Why or why not? These are tricky questions, and I’m not advocating for any particular point of view here, but the bottom line is that a straight “Are you X religion?” question is always, by design, going to leave out people on the margins.

Other surveys, Mitchell noted, have asked a variety of questions around religious beliefs and activities to give a more nuanced understanding of religious participation.

One of the key findings of the report was that, “with aging white Christian groups now accounting for fewer than half of the public and non-Christian groups constituting the country’s youngest religious communities, the future of American religion will likely look strikingly different than its past.” (PRRI Release) Specifically, the survey reports that 35 per cent of Buddhists in America are under the age of 30, as opposed to only 11 per cent of Catholics, 11 per cent of white evangelical Protestants, and 14 per cent of white mainline Protestants. This suggests a break with the past, when one-third or more of American Catholic and Protestant Christians were under 30, suggesting an aging and thus declining overall population.

However, Wilson urges caution in reading these statistics:

I can’t help but wonder whether this result reflects the data collection methods, rather than reality.  The willingness to claim a Buddhist identity is likely higher among younger Buddhists than among older Buddhists (i.e. people significantly involved in Buddhist practice, but who have not acclimated to the American cultural norm of claiming a particular religious tradition). This is, again, due to the cultural history of non-identification in much of Asia (especially East Asia), which would skew the results.  In other words, there may be a lot of older Asian-Americans practicing Buddhism, but they may not say they are Buddhists on surveys, so their much more forthright descendants end up over-represented in this category. Another area questioned by Wilson was political affiliation. The survey found only 9 per cent of American Buddhists to be Republicans. Wilson pointed to a 2008 Pew Forum survey, which “skews in some ways toward the more liberal end of American Buddhism,” that gave a figure of 18 per cent. (Tricycle) Speaking of the PRRI number, he said, “It’s either an indication that the survey was not representative of actual Buddhists in America, or it accurately shows that Buddhists who lean Republican as voters are nonetheless very unlikely to actually join the party, for some reason. The former seems more likely but the latter would be very intriguing.” As above, the survey might have missed older Buddhists (who, like members of other American religions, lean more Republican than Democrat), or that those who do vote conservatively, but did not claim support of the Republican party in the poll. The poll’s methodology might again be behind this, as it only asked respondents if they were Republican, Democrats, Independent, or Other/Don’t Know. Buddhists tied for the largest number of Independents at 47 per cent, many of whom could have fallen into the conservative end of previous polls.

Mitchell also agreed with the overall number of Buddhists in the US given in the PRRI survey (approximately 1per cent, or 3.2 million people). “I think a conservative 1–2 per cent US Buddhist population is probably accurate. If you favor a stricter definition of ‘Buddhist,’ round down. If you favor a looser or more fluid definition of ‘Buddhist,’ round up.” That disparity, though, is quite large, and will continue to invite scholars and others to find better ways of understanding and surveying Buddhists in America and elsewhere in the West.