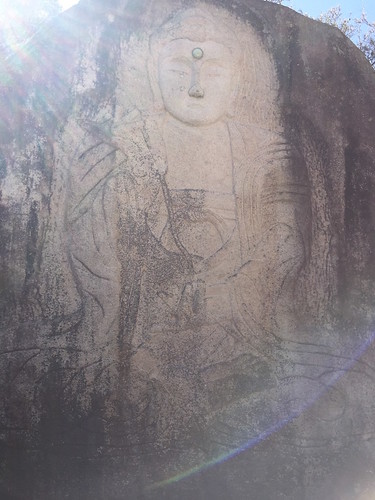 South Korea’s temples exemplify everything that makes the Buddhist heart beat strong. They boast historical glamor, artistic and architectural splendor, and societal adaptability tempered by institutional resilience. The story of each monastery is special, like a unique puzzle piece without which a jigsaw portrait would be incomplete. Bongamsa is one such sanctuary, and perhaps the most exclusive of the Nine Mountain Temples of Seon—the Korean incarnation of Chan or Zen.
The Nine Mountain Temples are elite institutions admired for their strict retreats. Bongamsa is open only once a year, during Vesak (the commemoration of the Buddha’s life, usually held in May), with the other 364 days spent behind closed doors. My friends and I were able to visit thanks only to access granted by one of its masters, whose invitation we gratefully accepted.
Set before the majestic backdrop of the mountain Huiyangsan, Bongamsa was founded during the reign of King Heongang (r. 875–86) by the monk Ji Jeng Daesa. Contextualized, its construction in 879 was concurrent with the ongoing collapse of the early medieval world order, with the further decay of the Chinese Tang dynasty (618–907) after 830, the collapse of imperial Tibet (618–842) after the assassination of Emperor Langdarma in 842, and the fracturing of the Abbasid Caliphate’s authority at around the same time. The Goryeo dynasty king Taejo (r. 918–43) rebuilt the complex in 935, but most of the buildings had to be restored again after the Japanese invasions of 1592–98. Information plaque of the stone-carved Buddha.
When we arrived on 4 March, the winter chill in the valley was formidable, yet the beauty of the place was breathtaking. Usually tourists and pilgrims like to visit Korea in springtime when there is much more color, but there is a bleak majesty about Bongamsa’s natural surroundings in winter: the leafless trees, the crisp blue sky, and the dry, weathered shrubs. Near an old stone bridge by the parking lot of Bongamsa is another attraction, which we went to first. It is a short hike across boulders and gravel pathways to the serene Baegundae Valley (one can trek back and forth between Bongamsa and Baegundae). The crystal-clear stream cleaving apart the rock faces comes complete with a small waterfall that can be crossed via stones leading to the other bank.
The hillside on the far side of the valley (from the perspective of the temple) is home to several massive boulders, one of which is engraved with a stern but compassionate-looking Buddha. That day, the figure’s countenance was bathed in sunlight, as if the star was paying homage to the sacred image. Another piece of natural beauty was the sizable tributary of glacial, slippery ice on the rocky pathway beneath the boulders. Thanks to the chilly weather, the trail of water that would otherwise trickle down the rocky hillside formed an entire sheet of enchanting ice.
After visiting the Baegundae Buddha, we went to pay our respects to the Dharma and sangha. The temple itself is an open, almost silent complex with many large halls built using traditional construction methods. The Hall of Ultimate Bliss is the oldest structure remaining. The narrative murals and floral patterns on the walls and multi-inclined roofs of the temple buildings predominantly use aqua accompanied with the primary colors. The extraordinary mosaic decorations, perhaps inspired in part by medieval Korea’s extensive contact with Central Eurasia in the temple’s founding period, easily rank among the most complex designs of Buddhist architecture. The complex boasts several Unified Silla-era (668–935) artifacts for public viewing, including a three-story stone pagoda inspired by the Indian stupa and a commemorative stele celebrating the royal favor of Heongang. Baegundae Valley
We first checked in at the reception office, and soon were taken to a simple hall with several rooms and sliding doors. There I met Jung Myung Sunim, one of the master monks. When I asked how his students had benefited from the recent winter retreat (which concluded at the end of February), he offered one sentence: “We let them experience hell.”
What strikes me about Seon is its Spartan simplicity, its austere frugality. In a way, Bongamsa’s monastics’ artless and hard-core commitment to spiritual liberation is intimidating. But Seon is not about reassurance. When I met Jung Myung Sunim, I expected what I was usually accustomed to when speaking with religious leaders: discussion on all issues under the sun, amounting to a satisfying intellectual exchange. But this was not to be the case. The Venerable’s hard truth was that in Bongamsa’s retreats, there is barely anything to do the entire time save sitting and figuring out kong’an (koan) riddles. Discussion is but distraction. A laser-like focus is needed for the question assigned to the individual practitioner. There is nothing else.
Jung Myung Sunim noticed my surprise. Indeed, it would have been more comforting if the master had peppered me with terminology, schedules, and all manner of “busy-ness,” because that would have meant there was plenty to do during the summer, winter, and special retreats. Traditionally, most temples have two seasonal retreats a year, but Bongamsa has an extra one that lasts for 21 days, in which participants are forbidden to sleep at all. This elite retreat demands 19.5 hours of sitting meditation each day, leaving only a few hours for eating and other necessary activities. Bongamsa temple grounds with the three-story stone pagoda in the foreground
The master speaks fondly of kong’an, explaining that the role of the teacher is like that of a doctor dispensing medicine—here in the form of the kong’an: “You have to trust the master. You also have to trust yourself. You have to believe that you can get cured and achieve enlightenment,” he says. Soon, he asked if I wanted him to give me my own kong’an to meditate on. I forced a nervous chuckle—I didn’t trust myself in the slightest. This was Seon at work—catching the self-assured and pretentious off-guard, pulling at the seams of discursive thought until the fabric of the constructed self falls away. It’s discomfiting to feel naked, however. While I declined Jung Myung Sunim’s offer, the genius of his challenge was that I was left reflecting on whether my hesitation and discreet refusal were a moment of humility, or one of cowardice.
I recalled my own imperfect practice, my focus on reciting the name of Amitabha Buddha as his revealed means of liberating all beings. Admittedly, a part of me was disappointed that I couldn’t build a further rapport with him by accepting. However, I could barely recite the Buddha’s name satisfactorily; what hope did I have with sitting by myself with a single question?
Another master, Won Kuen Sunim, showed us around the temple grounds. After the tour, he signed a book from Bongamsa for each of us, writing our names using hanja (Chinese characters). “A journalist should write good things. Positive things,” Won Kuen Sunim said to me. His tone was one of caution, warning. I asked him what prompted his remark—surely, I assumed, religious and cultural journalism was different from the tabloid sensationalism and vanity that dominates much of the press? The Pure Land hall at Bongamsa
Turning to me, my friend noted that I had missed the point. Since the end of the dictatorships and their censorship of the media in the 1980s, South Korea’s “establishment” (government officials, lawyers, journalists, and so on) have been repeatedly caught accepting payoffs and illicit bribes by powerful Korean companies (chaebol) for blackmail and “whitemail” alike: threats withdrawn as well as favors done. What Won Kuen Sunim deplores is not the journalistic industry or even elements within it, but the loss of public integrity and moral conduct in South Korea’s culture of bribery and pay-to-play business. Against this backdrop, the Seon message of simplicity, purity, and virtue would seem to ring louder than ever.
Silence followed as my friends and I reflected on Won Kuen Sunim’s words. Then he rubbed his stomach—it was lunchtime. “I’m hungry,” he chuckled suddenly. There was no need for translation. It was the first and only time he had uttered a sentence in English.
And with that, and ironically the most enjoyable temple lunch I’ve had in a while, our short day at the epicenter of 1,100 years of Seon was at an end.
All photographs are by the author.