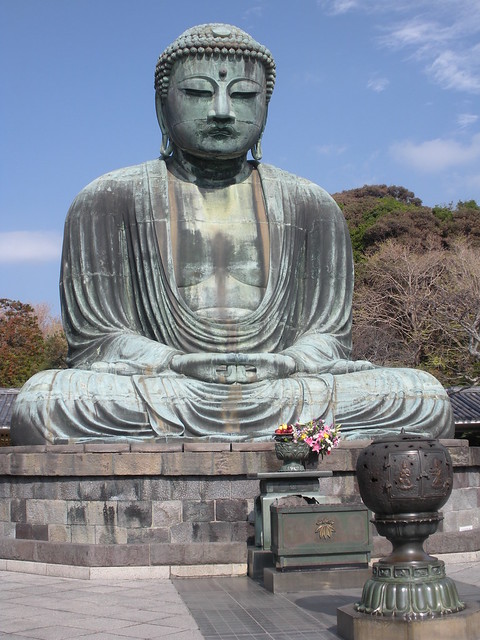 The city of Kamakura in Japan’s Kanagawa Prefecture is home to one of the most poetic and paradoxical works of Buddhist sculpture. The statue is the Great Buddha, or Daibutsu, a giant bronze figure of Amida Buddha measuring 11.3 meters in height at Kotoku-in, a temple of the Jodo-shu branch of Pure Land Buddhism. The elegant Buddha is seated in the lotus position with his hands in the gesture of meditation, his eyes cast downward in peaceful contemplation. What is peculiar about this magnificent Buddha is that he sits in the open air, exposed to the elements, as he has done since 1498, after typhoons, tidal waves, and earthquakes devastated the temple building that once housed him. Since then, no new temple has been built around the image. Instead, the Daibutsu sits calmly on a stone platform emanating total balance and serenity—a monument, simultaneously and paradoxically, to physical permanence and the Buddhist concept of impermanence.

The beloved statue of Amida (Skt: Amitabha, Amitayus) was built in the mid-13th century, several decades after the nation’s political capital was moved from Kyoto to Kamakura by the new military regime, the Kamakura shogunate. The military rulers of Japan embraced Buddhism and established many temples around their new capital to provide spiritual sustenance for the elite and the samurai warriors who served them. One of the traditions they embraced was Pure Land Buddhism, a sect devoted to the worship of Amida Buddha. Amida is believed to have vowed to liberate all beings from samsara, irrespective of sex, age, social standing, and even behavior and deeds. Simply by following Amida, devotees are guaranteed rebirth in his glorious Western Pure Land, where the Buddha will then assist their souls on their search for enlightenment, or nirvana. Mida no join, a variation of the dhyana mudra, meditation hand gesture of the Great Buddha at Kamakura. Photo by Meher McArthur

Pure Land Buddhism was transmitted to Japan from China during the Heian period (794–1185), when it was practiced mainly by members of the imperial court, but under the new military regime the sect gain a broader following among the general populace. Pure Land temples were established throughout the country and images of Amida, his celestial entourage of deities, and his glorious Western Paradise were commissioned for display in the temples and for followers to worship in their homes. In Pure Land Buddhist practice, mindfulness of Amida is supremely important. Devotees repeatedly chant Amida’s name, a practice known in Japanese as nembutsu, and perform meditative contemplation and visualization of Amida, creating a bond with the deity to ensure their soul’s passage to his Pure Land. Many images depict Amida descending with his celestial attendants to collect the soul and transport it to paradise, and, from the early days of Pure Land Buddhism in Japan, devotees on their deathbed held the end of a string attached to such images, known as Amida’s Welcoming Approach (Japanese: Amida Raigo), to ensure that Amida carried their soul to paradise. 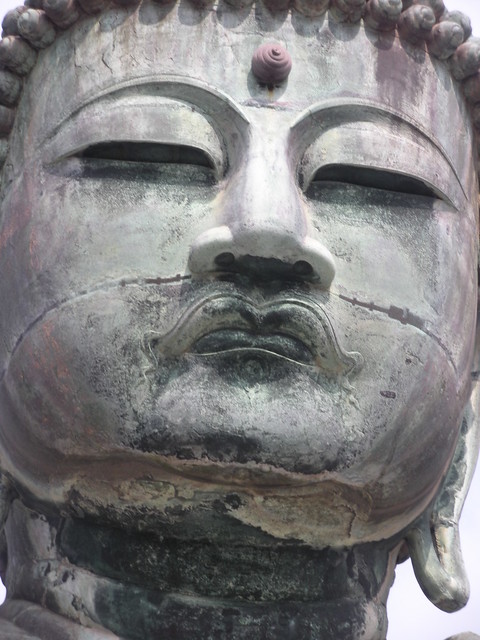 The serene face of the Great Buddha of Kamakura. Photo by Meher McArthur

According to chronicles of the Kamakura shogunate, work on building the Great Buddha at Kotokuin began in 1252, and priests from the temple gathered donations from the local population to help pay for construction. The bronze Buddha was originally covered in gold and housed in the Great Buddha Hall, or Daibutsuden, but the structure was damaged by typhoons in 1334 and 1369, and subsequently in a severe earthquake in 1498. Over the years, the statue itself has been damaged by the elements and repaired on several occasions but has remained uncovered for more than half a century, during which time not only Buddhists but also travelers from around the country have paid their respects to the Great Buddha. In the mid-19th century, artist Ando Hiroshige (1797–1858), who produced some of Japan’s most famous woodblock printed landscapes, paid homage to the image with a print, naming it after one of the later temple halls of the Kotoku-in, the Shojosen-ji. Later in the century, British writer Rudyard Kipling visited Japan and was so awed by the sculpture that he penned a poem to the Buddha at Kamakura. Today, Buddhists of all traditions and travelers from all over the world come to visit the Great Buddha of Kotoku-in. The figure has become so well known that it now ranks alongside Katsushika Hokusai’s woodblock print The Great Wave off Kanagawa as one of Japan’s most iconic artistic creations. Just as Hokusai’s Great Wave, which depicts small fishing boats being tossed around by a massive tidal wave, reminds us of the truly awesome power of nature, this Great Buddha, sitting in the open air without the protection of a temple building, is also a reminder of the destruction that can be inflicted upon human structures by the forces of nature. However, at a time when so many regions in the world are suffering from the devastation of earthquakes, hurricanes, tsunamis, fires, and other natural disasters, this powerful Buddha image, which has survived wars, fires, earthquakes, and typhoons for 750 years, is also a reminder of the strength of the human spirit and in the belief in something greater than ourselves.

Senso-ji: A Buddhist Temple for the People
Monkeys, Catfish, and Demons in Priest’s Clothing: The Buddhist Roots and Themes of Japanese “Otsu-e” Folk Painting
Humility, Faith, and Other-Power: Shinran’s "Tannisho"