Spiritual Crossroads (Part II): The Movement of Amida-shu in the West 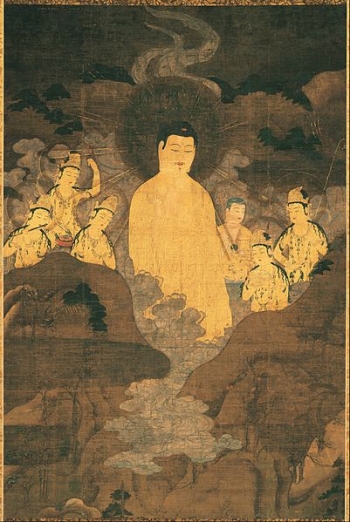 Hanging scroll of Amida "coming over the mountain" (kenpon choshoku yamagoeamidazu) from the Kyoto National Museum dated to 13th century Kamakura period. From Wikimedia Commons.
Editor’s note: David Brazier is a Buddhist teacher, writer, and psychotherapist. He is President at Instituto Terapia Zen Internacional in Spain and the head of the Amida Order in the United Kingdom. An international authority on Buddhist psychology, he practices in the humanist, existential, and psychodynamic schools of psychotherapy. He has written prolifically on poetry, psychology, and culture. David’s books include (among others) Zen Therapy, The Feeling Buddha, Love and Its Disappointment: The meaning of life, therapy and art, and Not Everything is Impermanent. Visit the website of the Amida Trust here.
This article is the second part of David’s essay Spiritual Crossroads. Here he explores how his Order, Amida-shu, has adapted to the needs of the West while maintaining its identity as a Pure Land-inspired movement. Critical to Pure Land’s acceptance beyond Asia is its intersection with other disciplines that enrich outsiders’ understanding of the devotional tradition, including psychology and social activism. Ultimately, Pure Land is a transmission that defies stereotyping, and this reality is one that devotees and Western seekers alike will need to come to terms with.

Amida Trust came into being in 1996. In 1998, a small group met at a house in France for a retreat devoted to the examination of Buddhist teaching as a basis for social action. This turned out to be a particularly formative and intense meeting and it culminated in an unanticipated ceremony in which some individuals took bodhisattva vows. This event was later to be regarded retrospectively as the foundation point of the Amida Order. The Order was formerly recognised by the trustees of Amida Trust in 2001.

Thus, in effect, a small new religious movement came into being. It has continued to evolve. The vows taken in 1998 subsequently underwent a process of revision and from this ultimately came a constitution called “Provisions for the Structure, Continuity and Governance of the Amida-shu”. The title is generally shortened as “Provisions”. A distinctive feature of the document is its inclusion of procedures for its own revision through processes of consultation. This means that the Amida-shu can continue to evolve through the initiative of its own members. This makes it a distinctive form of organisation in the world of Western Buddhism.

Amida-shu is inspired by Pure Land teachings and principles, but it is administratively independent. The Order formed under the umbrella of the Amida Trust. However, as Amida-shu and the order grew beyond the UK, they outgrew their parent body. The Order and Shu remain a purely religious fraternity and do not have a bank account. Organisations do, however, get set up as necessary to achieve particular purposes. Thus there is now an Amida (USA) based in Hawaii, an Amida Mosaic in Ontario in Canada, and the Instituto Terapia Zen Internacional, seated in Spain but operating internationally. In some parts of Europe, Pure Land is so unfamiliar that it makes more sense to present it as Zen-plus: in other words, Zen plus nembutsu (nien-fo) chanting.

The connection with Buddhist psychology has also been an important gateway for many people. In Japan, Pure Land gave rise to a form of psychotherapy called Naikan, centrally concerned with the generation of gratitude. Also, many Japanese Pure Land practitioners have been influenced by the work of the American psychologist Carl Rogers. I knew Rogers when he was alive and was also deeply influenced by his ideas. The notion of an “actualising tendency”, which is a key to his thinking, can be seen to tally with the transcendental ideas of Pure Land.

Amida-shu is a fledgling community that has a strong ethos and community spirit. Although it is difficult to present a clear picture of its merit to non-members, it is growing slowly. There are larger Pure Land organisations in the West. The largest is Buddhist Churches of America, a Jodo Shinshu group. However, it does not operate in Europe and in America it is shrinking as its Japanese membership slowly becomes Americanised. There is some representation of other branches of Jodo Shinshu in Europe that are much more closely tied to Japan than Amida-shu. It remains to be seen whether their approach of transmitting a Japanese model in Europe can be successful. At present they remain small.

A particular feature of Japanese Pure Land is its strong emphasis on “bombu nature”. All Buddhist schools accept that ordinary people are deluded, but generally this is coupled with a strong emphasis on an agenda of self-perfection of some kind. In Japanese Pure Land the whole idea of self-perfection is abandoned. One cannot hope to perfect oneself by one's own power. Entrustment to Other Power is the key idea here.

Westerners who have spent many years practising other forms of Buddhism sometimes find this principle a profound relief. For others it smacks too much of relying upon the grace of God. However, people do not really enter this path through intellectual conviction. They are much more likely to be personally touched by the profound sense of love and fellowship that so readily arises between people who share these ideas and practices.

Many have commented on the similarity between this approach to spirituality and that contained in the Twelve Step programmes developed to help addicts. It is certainly useful to find some similarities. To most Western people, Pure Land seems very unlike what they have got used to thinking of as Buddhism – a semi-secular, spiritual self-help philosophy centred on meditation – and this makes it difficult to position it in the public eye in a way that communicates clearly to people.

Westerners who do take the plunge into Pure Land seem to find something of immense value in something a lot closer to East Asian Buddhism than is widespread in the West. It remains a kind of open secret, freely available, but invisible to the majority of people. Because if they are materialist they are not looking for a religion, if they are spiritual and religious they do not want a form of Buddhism. And if they are Western Buddhist, they do not know what to make of Pure Land because it defies most aspects of the common Western stereotype of what Buddhism is.
Spiritual Crossroads (Part I): Difficulties in Bringing Amida Buddhato Europe