There was a time when Lama Sangak Yeshe Tsomo was bad at meditating. For years, she had tried to meditate daily without formal instruction. “I had it wrong. I thought you were supposed to just stop your brain,” she recalls.

The woman with curly gray hair and a creased, warm smile was then a psychologist named Linda Pritzker. Born into a wealthy and influential American family, she had become interested in Buddhism, but was seeking more than just an intellectual understanding. In her early efforts, however, something was missing.

“If I want to learn piano, I go to a piano teacher,” she remembers thinking. She wanted to learn meditation, so she created a list of qualities she was looking for in a meditation teacher. “Unfortunately I forgot to put something on the list: must speak English. I got exactly what I asked for . . . so that’s how I came to learn Tibetan!”

Now a teacher in the Tibetan Namchak lineage and a student of Tulku Sangak Rinpoche, she has become fluent in the language and dedicated herself to spreading the word about teachings that have been so “incredibly beneficial” in her own life. With her lively and probing style, Lama Tsomo embodies the many ways in which Tibetan lineages are being transmitted in the West—crossing boundaries of gender and nationality to reach a wider audience. Bridging two cultural worlds—her American heritage and her Tibetan religion—she hopes to translate Buddhism for new audiences. Her aim is to demystify meditation and break down misconceptions, and in doing so she represents a new generation of American teachers, empowered in Tibetan lineage but finding fresh ways to transmit the Dharma.

Lama Tsomo came to Tibetan Buddhism from a Jewish-American background. Her cultural heritage ended up being particularly useful when she was looking for her meditation teacher. “In Judaism, you learn through lively dialogue and debate. That was encouraged at my dinner table,” she says. When she first heard Tulku Sangak Rinpoche speak, she was warned by an American friend not to ask too many questions. However, when Rinpoche finished his talk, she raised her hand. “I started asking these questions and he’s sitting up and getting excited. I went ahead and asked, ‘Is it okay if I ask questions?’ And he said, ‘How else are you going to learn?’ ” She felt at home. When he later introduced debate to the group, she says with a smile: “I was back at my dinner table from growing up.”

Pritzker became Lama Sangak Yeshe Tsomo in 2005. Having gone by two names, she can expand her sense of self more easily, she says. “Ego means ‘I’ in Latin,” she explains, channeling her training in psychology. “Having two names, so that when the phone rings I don’t know if I’m going to answer as Lama Tsomo or Linda . . . I loosen my grip on my identity.”

Lama Tsomo has published her first book under that name, Why is the Dalai Lama Always Smiling? (Namchak Publishing, 2016). The book presents a practical introductory guide to Tibetan Buddhism for Westerners, full of tips and stories from the author’s own life. She has taken on this role in her lineage, as a teacher for beginning Western students, partly because she is able to bridge that cross-cultural gap. Having learned Tibetan for her own studies, she noticed problems arising in the translation of concepts: “I was finding words in Tibetan for various states of mind and states of being that we don’t have in English. If we do have them, they’re often with a Christian slant,” she says. For example, the word “renunciation” often carries associations of “hair shirts and starving” for Westerners, Lama Tsomo says. When Tibetans use the term, it doesn’t translate well for Western audiences. “The word would be better translated as ‘disgusted’—we’re fed up with the things of samsara because all these material things we’re seeing around us, this dream that we’re caught in, hasn’t held up for us.” 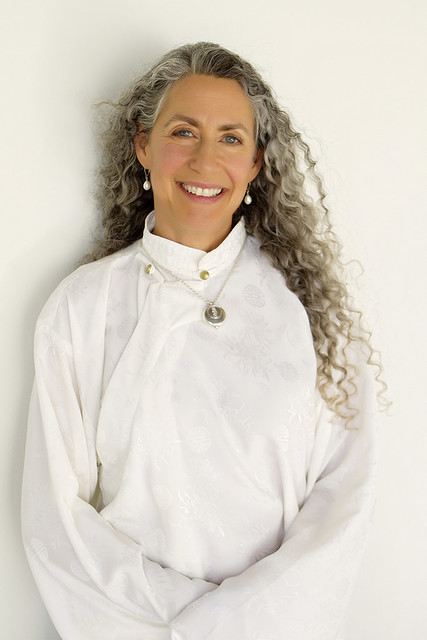 Her attempts to clarify these misconceptions come through in her tone and teaching style. Lama Tsomo speaks with an off-the-cuff ease, and yet it’s clear that she’s impeccably prepared. She often laughs, breaking into a beautiful smile, and switches quickly from casual, loose banter to precise descriptions of difficult concepts.

Her ease at code-switching has been helpful for her in becoming a teacher. “For me, having already trodden this ground, I can help build the receptors so that when I translate something or give teachings, it lands,” she says. “I love the process of teaching and seeing the lightbulb light up in a student.”

One of her favorite ways to light students up is by “sneaking up” on meditation. Instead of announcing that she’s beginning a meditation practice, Lama Tsomo will simply ask everyone to be quiet. Students are asked to consider what they’re doing at that moment—something that they do all the time. Soon, the answer comes: “Yeah, I’m talking about breathing!” she exclaims. Together, they notice their breathing for a moment. “Then I say, ‘Congratulations, you were just meditating.’ ” She will often then explain shamatha, the practice of calming the mind through concentration on an object, usually the breath. An experiential approach to shamatha helps Westerners break through any fear and confusion surrounding the term and its practice, and returns it to a practical, personal level.

“I want to demystify it,” she says. “They get daunted by their own misconceptions.”

Like many teachers in her tradition, Lama Tsomo believes in a balance between experiential and intellectual learning. Meditating is important, but students also need context to guide them, and time to reflect on what they’ve done. “In my education as a lama, my teacher would give me enough background to make me do the practice properly, then he’d send me off to do it for a while. He said, ‘You won’t even know what to ask unless you’ve been sitting there for a bit.’ ” She laughs at the memory. “Of course, the questions didn’t stop after just a bit of practice!”

Lama Tsomo continued to learn and ask questions, and thus initially resisted becoming a lama herself. However, over time, she realized that her teacher wanted her to step into the role for a reason: “When I introduce myself as Lama Tsomo, people get that I have some kind of training behind me. There’s an immediate respect for that, and it’s for real. It’s the role of authority, the role of a spiritual teacher,” she says. Now, she has responsibilities establishing the Namchak Retreat Center in Montana, as well as working on an educational foundation for the lineage.

As one of the world’s few female lamas, Lama Tsomo brings a dual self—both the American woman she is in this life, and the larger, deeper sense of connectedness to the Dharma—to the role. She has not left behind the person she was when she first started trying to meditate, but she has “loosened her grip” on that identity, in making space for another. Together, they give her a unique perspective as a teacher.

“I’m so much happier for having done these practices,” she says. “Of course I want to share them with my fellow Westerners, and I want to do it in a way that they can relate to.”