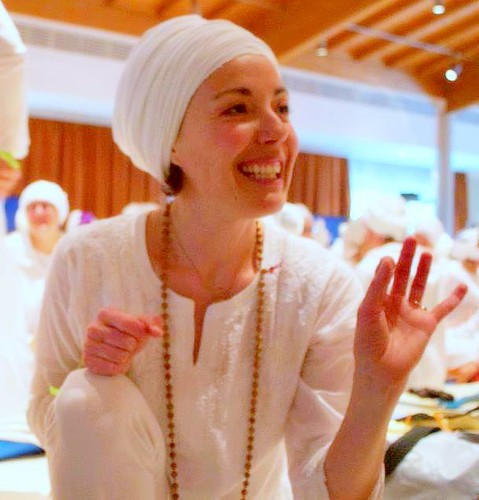 I met Giovanna Mollo in 1997 at Rudolf Steiner College in Fair Oaks, California, where we were enrolled in graduate work, studying Goethe, Evolution of Consciousness and the Arts. For me, it was platonic love at first sight. We were both passionate about holistic child development, biodynamic gardening, and artful living, as well as healthy eating, and Japanese culture and aesthetics. After graduation, I moved to Austin, Texas, to teach school, and enrolled in Kundalini yoga classes. Giovanna moved to Oakland and then Los Angeles, founded a jewelry line, and eventually discovered Kundalini yoga with teacher Gurmukh Khalsa at Golden Bridge Studio in Hollywood. As with everything she does, Giovanna immersed herself to the fullest.

Giovanna dove into the asanas, pranayama, and mantras of Kundalini yogic practice, receiving the spiritual name Siri Kirin Kaur, meaning Big Ray of Light. The names we receive at birth show our karmic connections, while spiritual names given at points of ordination or rites of passage reveal our true nature. While Giovanna says she has depression in her DNA from her mother, her Sanskrit name reminds her of her timeless inner light. When one is called by one’s spiritual name, the consciousness is reminded of one’s true identity, transcending the ups and downs of karmic existence.

Most people in this world are sleeping. This is because they have no tools to make changes in their consciousness or vital body. Living at the level of one’s real potential requires a certain amount of vitality and energy, or it’s difficult to live to the highest attainment. It takes beneficial karmic circumstances and a commitment to produce enough energy to support the best self. When running on low energy, there is less caring for oneself or others, as well as less patience. The body needs to move to create energy, to release the various tensions that accumulate. According to Siri Kirin Kaur, Yogi Bhajan taught that we metabolize thoughts, emotions, and feelings, and we need to make sure we metabolize all of it. We cannot overload our body with emotions and so much of life’s complex stimuli. For example, a tired mother may not be able to digest it all, instead she needs to release some of her burdens before they pile up. If she cannot meditate every day, Siri Kirin Kaur says she risks being irritable toward her partner and kids. 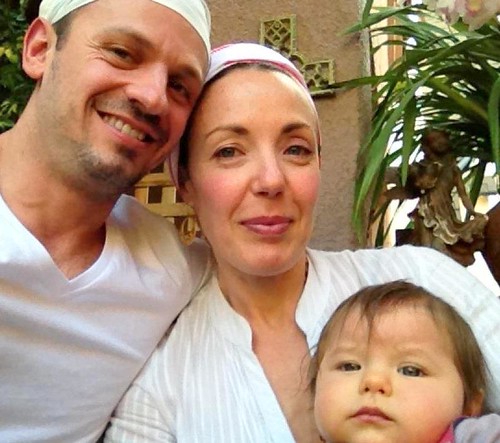 For all of us, not just yoga practitioners, there is a real opportunity to change our state of consciousness through techniques available to all of humanity. Blame, shame, sadness, and anger are all states that we can transform using breathing exercises, which work in the body to rewire our nervous system. The endocrine system becomes more efficient and experiences of wellbeing increase beyond what is dictated by daily life occurrences. This way one can feel good even if some aspects of life are painful or problematic. When the nervous system is really strong, there will be more tolerance, and a greater degree of patience, especially with children. This is very important for parents and teachers. If quality of life is poor, we don’t know what to do besides suffer and complain. There are many skillful techniques to initiate change from within.

As a kundalini yoga teacher, Siri Kirin Kaur explains that the standard lengths of time for shorter meditation sessions are 11 minutes, 31 minutes, or 1 hour. She practices 11 minutes twice a day as a bare minimum. Without compromising this, she tries to add a 30-minute, 60-minute, or 90-minute session as well, first doing yoga practice for the body, followed by meditation. As a new mother, Siri Kirin Kaur became adept at finding time by training her daughter Zoe to not interrupt her. Now her two young daughters know they will not leave the house for the park until mommy gets her 11 minutes! They know they have to wait, and thus they have learned patience and respect, which will translate into self-respect. Her students are also a huge motivator as Siri Kirin Kaur feels ashamed to arrive to teach without first doing practice herself. She admits her kids distract her very much, but that it motivates her—being so thirsty for practice makes reading even one page of Dharma with baby Uma on her leg a source of nourishment. As she puts it: “When you first start to sit down and meditate, you meet the part of yourself you have been ignoring, where you don’t have a strong relationship. The only way to know yourself in depth is to stop, examine, go past the superficial experience and look deep within. It’s not necessarily a pleasant experience—but then you know what you want to work on, and then you can choose. Meditation has a very practical aspect; periods of realization alternate between periods of frustration. It’s not necessarily going into bliss.”** Siri Kirin Kaur stresses the importance of infusing daily life with a meditative mind, echoing the words of Indian yogi and teacher Dipa Ma: “Live your life. Do the dishes. Do the laundry. Take your kids to kindergarten. Raise your children and your grandchildren. Take care of the community in which you live. Make all of that your path, and follow your path with heart.” As a busy mom and yoga teacher, Siri Kirin Kaur also teaches a holistic cooking class with recipes for daily life. Although in Italy most everyone eats wheat-based foods, she teaches the use of various healthier grains to create simple delicious recipes. Her preferred lifestyle is a mostly vegetarian diet, and as she used to spend hours making pasta and meat dishes from scratch, she now cooks hearty millet, quinoa salads, or barley soup, incorporating a variety of condiments such as miso, cayenne, tamari, gomasio, and shoyu. This switch to a grain- and plant-based diet completely changed Siri Kirin Kaur’s self-image and body relationship. She feels healthier and thinks less about how she looks, and more about feeling comfortable in her own skin. She also invests in people who can help her make health a priority in her family and community. She taught her cleaning lady how to clean and prepare produce so there are always enough fresh vegetables on hand for evening meals. Siri Kirin Kaur posits that women need to eat a lot of vegetables—especially if they are providing for others to eat, it’s fundamental to have fresh daily greens, at least four to five days per week. She shows people that there are delicious options to add to their diet, rather than immediately cut out less healthy foods. Over time, one can reduce reliance on animal products, especially meat. Mandala of Many Grains © 2015 Giovanna Mollo

Eating too much refined sugar, flour, and rice changes the body shape and level of energy. One can exercise a lot but the body accumulates too much sugar when filled with refined foods. This also relates to satiation. We have such an abundance of foods, but lacking nutrition we take multivitamins to supplement. According to Siri Kirin Kaur, rather than strip nutrients from our food, we can return to simpler, less processed whole foods. She declares that if she can do so while working and living with two young children and her partner in her parents’ tiny home, anyone can! Siri Kirin Kaur is a revolution in Rome, having brought her own approach to teaching Kundalini yoga, birthing her two daughters naturally at home, and now teaching holistic vegetarian cooking for health and wellbeing. She is also passionate and outspoken about animal rights. All of these are revolutionary paths in traditionally Catholic, patriarchal Italy. In the spirit of Dipa Ma, Siri Kirin Kaur honors her grandmothers and ancestors, as well as her chosen teachers and gurus, to place the wholeness and health of the sentient being as the basis of her compassionate action.

Establishing awareness practices of body and mind, transcending borders, sources and lineages are so needed in our world today. The teachings of truth, awakening, communion, and continuity of consciousness address and melt our heavy karmas, ignorance, and feelings of separation. My deepest appreciation for all peaceful wisdom paths, for practitioners’ commitment to waking up, and to companions along the way, whose friendship and love surpasses distance and decades of change, to endure as unconditional love. Yogi, know thyself and all shall be known. May peace be upon you, and upon all beings. And may you know the depth of lifelong friendship as I am fortunate to know with Siri Kirin Kaur. Sat nam.

Kondañña’s Earth-shattering Education
The Religion of the Future