Cities and Kings: Ancient Treasures from Myanmar is the latest in a series of special exhibitions on Southeast Asia curated by the Asian Civilisations Museum (ACM) in Singapore. The collection of works traces some 2,000 years of cultural development seen through the art and architecture of emergent cities in Myanmar—an appropriate theme as the two countries celebrate 50 years of diplomatic relations. Some 60 artifacts from museums in Myanmar as well as from the ACM and a private collection are also documented in a catalogue, accompanied by essays from the museum’s curators as well as scholars from Myanmar and overseas.* 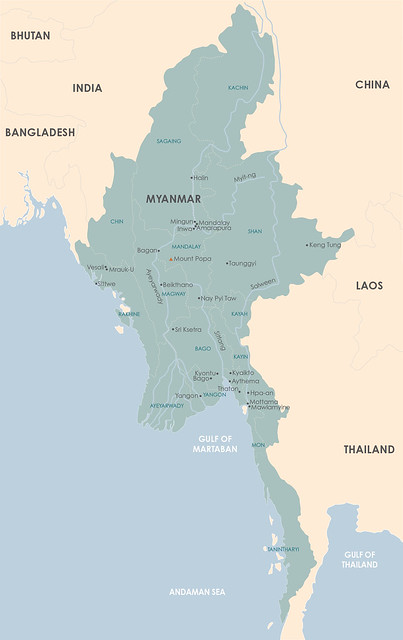 While acknowledging the cultural diversity of Myanmar—home to more than 135 recognized ethnic groups—the show necessarily focuses on key historical-cultural periods, starting with the earliest archaeologically recorded evidence of the Pyu city-states in Upper Myanmar (c. 4th–9th century CE) and the Mon kingdom in Lower Myanmar (c. 5th–11th century CE).** Both laid the foundations for monumental architecture and systems of water management. Stone sculpture and metalworking, ceramics, and other artistic traditions reflect strong trading connections and religious affinities with China, India, and neighboring regions such as Dvaravati in modern-day Thailand. Today, the three main ancient walled cities of Beikthano, Halin, and Sri Ksetra are UNESCO World Heritage Sites, while the coastal region south of Yangon in the area of Thaton is still believed by many people in Myanmar to have been the site of ancient Suvannabhumi, the Golden Land where the Indian ruler Ashoka sent Buddhist missionaries in the 3rd century BCE.

This large Pyu stele, found in Sri Ksetra during excavations in 1970, has carved reliefs that are thought to represent both Buddhist and Hindu motifs. On one side, three male figures in dhotis and turbans carry weapons evocative of Indian kingship and Hinduism. The reverse depicts an empty throne flanked by two kneeling female devotees. This silver bowl, also from Sri Ksetra, is stylistically very similar to bowls made during this period in China and found at Famen Temple near the city of Xi’an. Although it bears a Pyu inscription, it remains unclear whether such pieces were made locally or imported. 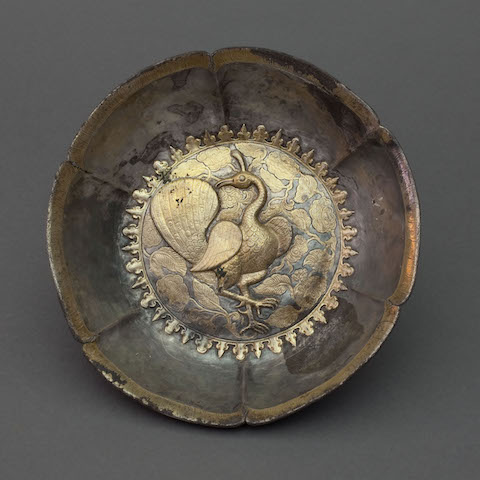 Although these cultures were eclipsed by the rise of Bagan in the central plains, Mon influences were incorporated there through the work of the Mon Theravada Buddhist monk Shin Arahan. The Mon returned to prominence in Lower Myanmar around the 14th century. Coastal sites around the Gulf of Mottama, including Bago, Pathein, and Thaton, have revealed a rich artistic legacy that includes clay votive tablets, finger-marked bricks, a wide range of ceramic plaques, and glass beads. The Mon legacy also lives on in the chronicles of Shwedagon Pagoda and meritorious works associated with the Mon king Dhammazedi (r. 1470–92). It is the only stupa dedicated to the five Buddhas of this era and today remains a national shrine.

Architectural ceramics feature prominently among the Mon artistic achievements. These include early, unglazed plaques from Kyontu, near Bago, with musicians and dancing figures modeled in deep relief. Although their meaning remains unclear, it is possible that they represent celebratory, perhaps even victorious occasions.*** The development of ceramics for trade from the 15th–18th century included colorful glazed wares. These plaques from Shwegugyi stupa in Bago depict a pair of demons from Mara’s army (left) and one of his daughters (right), who tried to defeat the Buddha during his final meditation leading to enlightenment. The kingdom of Bagan in the central dry zone of Myanmar is renowned for the propagation of Buddhism by Burman royalty during the 11th–13th centuries. The founder, King Anawrahta (r. 1044–77), consolidated Theravada Buddhism and the tradition of merit-making, which resulted in the proliferation of pagodas and monasteries. Decorative styles emerged that show continuities with Pyu art and influences from Mon and Dvaravati art in Thailand. Glazed tiles, with motifs from the Jataka stories of the Buddha’s previous lives and Mon inscriptions, decorated several stupas built by King Anawrahta and are thought to symbolize his own good karma and favorable rebirth as a king on the journey to enlightenment.****

Architectural styles were systematized under the patronage of King Kyanzittha (r. 1084–1112/13) and his wife Abeyadana. Wall mural painting and the inclusion of freestanding stone sculptures flourished, especially at Ananda Temple within the old walled city of Bagan. As Galloway notes, the spiritual journey to the center of the temple, passing paintings of the Ten Paramis (perfections) and multiple sandstone Buddha images (more than 1,535 in total) arranged in niches surrounding inner and outer corridors, must have epitomized the king’s own journey to Buddhahood.

Bagan declined after the 13th century, but by the early 19th century ritual life was still evident at the main temples.***** During the 1990s, extensive renovations were undertaken to repair sites damaged in the earthquake of 1975, and many of these are now pilgrimage sites for visitors from across the Buddhist world. A replica of the image below is installed at the restored 11th century temple known as Alodawpyi (“Wish Fulfilling”) Pagoda. Its fame has spread through the patronage of well-known donors and miniature replicas are donated at temples across the country. 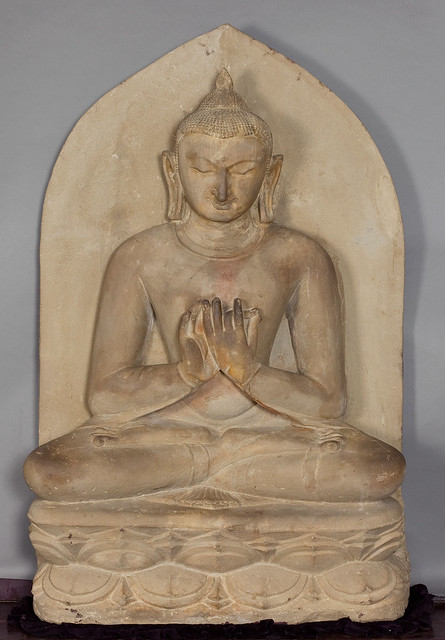 From the 14th century onwards, cultural exchanges took place through trade and religious missions. Incessant warfare also resulted in the appropriation of new cultural ideas and skills as communities that included artists and craftspeople were relocated, for example after the destruction of Ayutthaya in 1767. Little remains of the early palaces and monasteries of the Inwa (1364–c.1527) and Nyaungyan (1605­–1752) periods. However royal patronage contributed to the development of the traditional arts known as the “Ten Flowers” (Panseh Myo): bronze casting, blacksmithing, silver and goldsmithing, wood and ivory carving, stucco decoration, stonecarving, masonry and brickwork, wood-turning, painting, and lacquerwork. Art styles became more localized, as seen in the 18th century wall murals at Bagan, which depict images of the Buddha that are similar to the marble image below.****** It has soft features compared with the chiseled image from Bagan above, which has stronger affinities with Indian Pala art. 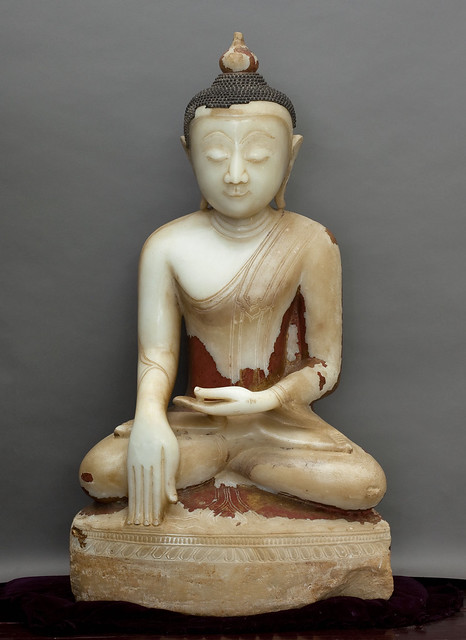 The Arakan kingdom situated in western Myanmar (present-day Rakhine State) also had strong Hindu-Buddhist foundations dating back to at least the 4th century. Vast fortress-like stone temples drew inspiration from Bengali, Burmese, and Mon models. The port at Mrauk U facilitated trade with Sri Lanka, particularly during the 16th and 17th centuries, when the Dutch East India Company controlled much of this trade. A single object from Arakan in the ACM exhibition, this company silver Buddha with a flame finial rising from the ushnisha (cranial protuberance), is an example of the strong Sri Lankan influence at this time. 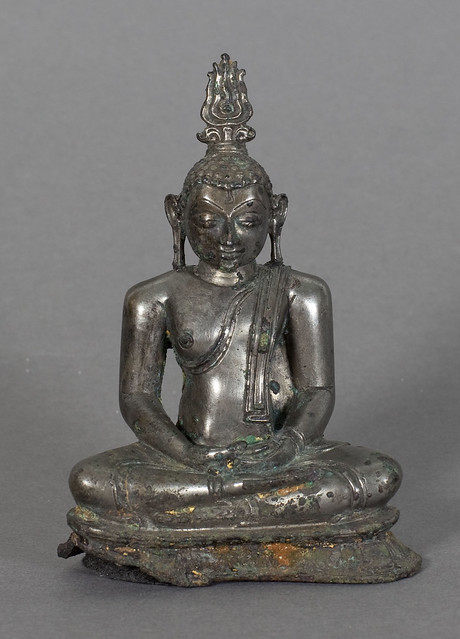 More numerous are the objects of Shan origin. Tai communities from southern China migrated into the mountainous river valleys in Myanmar’s northeast around the 11th century and established principalities known collectively today as Shan State. Luxury goods such as silver and lacquerware were made for Shan courts and played a role in tributary exchanges with China, neighboring Tai states, and Burmese rulers. Silver was sourced from mines in northern Shan State, while lacquer (thitsi) was sourced from trees that grow regionally in the highlands. This elaborate vessel with auspicious hintha-bird finial has modeled lacquer paste (thayo) relief work and inlaid glass decoration. It was possibly one of a pair that could have been offered as a meritorious donation to a temple. 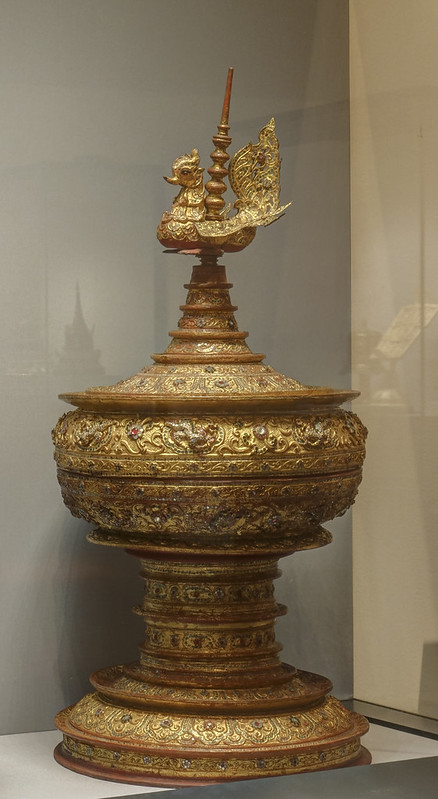 The most enduring symbol of royal patronage is surely the architectural form of the stupa, the embodiment of the Buddha and his teachings, and a focal point for rituals of merit-making. The Konbaung dynasty (1752–1885) saw a flourishing of royal building culminating in the creation of the fifth and final royal city in Mandalay by King Mindon (r. 1853–78). His devotion to ancient rites of city planning and Buddhist merit-making rituals, such as the hosting of the Fifth Buddhist Council (1871), were augmented by his interest in European culture. The latter resulted in the first diplomatic mission to Europe in 1872 and the employment of French and Italian architects. By then, however, British colonial rule was firmly established in Lower Myanmar and it was only a matter of time before the Third Anglo-Burmese War (1885) would see the last ruler, King Thibaw (r.1878–85), sent into exile in India.

This model stupa evokes a sense of the ruptured tradition of royal patronage during the colonial period (1824–1948). That such an object could be presented as a retirement gift to an English corporate executive by his Burmese employees reflected the growing need for artists to turn to new patrons after the demise of the court. Moreover, it was made at a time when newly emerging nationalist movements in urban areas such as Rangoon had begun to agitate for social change. These included the Young Men’s Buddhist Association (1906), which called for modern reforms of education and religion. 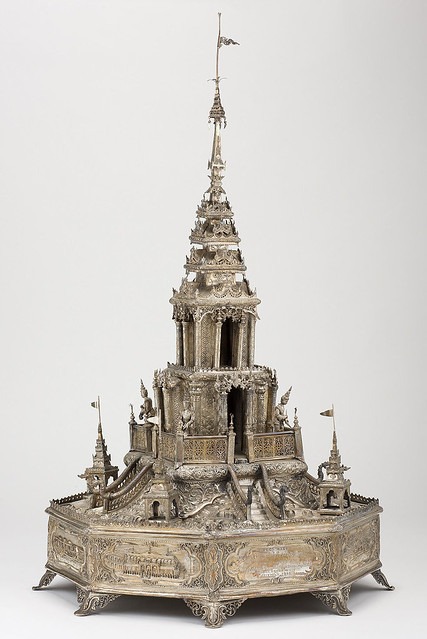 This small but selective exhibition vividly evokes the continual interplay of cross-cultural influences within the country and between Myanmar and its neighbors. As such, it is a timely reminder of how cultures are inevitably interconnected and how diversity with all its challenges, remains vital for innovation.

The Cities and Kings: Ancient Treasures from Myanmar exhibition at the Asian Civilisations Museum in Singapore opened on 2 December 2016 and runs until 5 March 2017.