Imagine you could give your child the kind of wise spiritual instruction provided to a young Tibetan lama. The kind of instruction that nurtures a happy, healthy person, with the emotional intelligence to help themselves and others. It’s what every parent and teacher would want. But where can one access such uncommon knowledge?

You could start with Sally Devorsine’s delightful children’s books, the Now I Know collection. Each book in the series is based on one of the Eight Verses of Mind Training written by the 11th century Tibetan Buddhist master Langri Thangpa—verses that the Dalai Lama has recited every day since childhood.

The books are aimed at helping kids solve real life issues in today’s complicated world by presenting ancient wisdom in a fresh, fun, and relevant way. 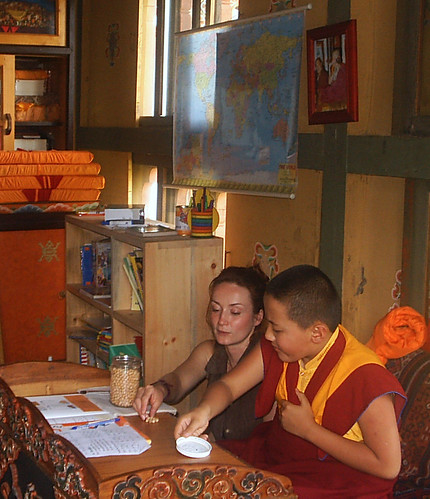 What makes the Now I Know books all the more remarkable is their backstory. The books grew out of conversations between the author and her young student Khyentse Yangsi Rinpoche—the recognized reincarnation of Dilgo Khyentse Rinpoche, one of the great Tibetan masters of the 20th century. Sally, an English woman with an arts degree, was plucked from her life in Hong Kong to become his personal English tutor in Bhutan. For 12 years she taught Khyentse Yangsi Rinpoche the ABCs while becoming immersed in the Buddhist teachings and culture of the remote Himalayan kingdom. It’s something of a “King and I” story for the millennium, beautifully told in Yangsi, a documentary of Khyentse Yangsi Rinpoche’s formative years.*

From that connection came this exquisite collaboration. Sally’s artistic hand and sensitive insights have brought the Tibetan verses to life in modern day situations. Her vibrantly illustrated stories, initially created to entertain her student, are now offered as a way to share perennial spiritual values with children around the world. And their publication could not be more timely. According to Sally, it all started with a talk with Khyentse Yangsi Rinpoche when he was about seven years old. “He told me that sometimes he felt like he was out of control, as if there was a monster inside him trying to get out,” she recalls. “It was such a powerful image I couldn’t resist putting it onto paper.” From there they discussed how best to deal with the monster, guided by Langri Thangpa’s third verse:

“In all activities, may I examine my mind
And as soon as conflicting emotions arise,
Endangering myself and others,
May I firmly face and avert them.”

And so unfolds the story Now I Know . . . That it’s Better to Face My Monsters. In the tale, Sally summons up the child’s inner demon in vivid painted colours to help him confront his destructive emotions and so learn to recognise, understand, and manage them. The lesson of the story is that by facing our problems courageously, they naturally recede. Even scary monsters lose their power when we attend and befriend them. That message chimes perfectly with the thinking of contemporary mindfulness teachers and pioneering educators who advocate the teaching of wellness skills in classrooms. Children in modern societies face enormous stresses: busy schedules and digital distractions are eroding their ability to focus, and recent figures indicate that 20 per cent of American school children now suffer from anxiety and 11 per cent from Attention Deficit Hyperactivity Disorder. More than ever, kids need resilience tools to help them grow and flourish as healthy human beings.

Responding to this need, bold education initiatives such as the Compassionate Schools Project in Louisville, USA, are running groundbreaking pilot curricula dedicated to fostering compassionate awareness among schoolchildren. The project is researching the benefits of socio-emotional tools that help students develop self-awareness and regulate their emotions, as well as communicate their feelings and get along with classmates.

The Now I Know books speak exactly to that. In the series, the reader gets to know a community of child characters who narrate their stories as they skip and dash between school, home, and neighbourhood settings. The characters explore the complex world of relationship dynamics and feelings, wrestling out their differences in the playground and learning key life lessons along the way.

The books show us how to see obstacles as opportunities and relationships as places of personal growth. In Now I Know . . . That Silly Hopes and Fears Will Just Make Wrinkles on My Face, the story’s heroine feels upset when the excited promise of a new best friend falls flat. But she learns to let go of her hopes and fears to enjoy each moment of life as it comes, for what it is, without expectations. In Now I Know . . . That it’s Better to Keep Quiet About the Good Things I Do, a brother-and-sister team shows us how our actions affect other people and how pride can taint our efforts. Blinded by praise and recognition, Charlie becomes less and less mindful as he goes about his good deeds. However his sister Mo, who is not motivated by personal gain, can see situations more clearly and act skilfully to help others, pluckily taking on responsibility for her brother’s mistakes.

Langri Thangpa’s eighth verse describes “all things to be illusion” and Sally situates this in the context of a child coming to terms with the death of his grandmother. In Now I Know . . . That I Just Have to Keep My Eye on the Ball!, Prem’s happy-go-lucky life is pricked by the truth that everything changes: all things, good and bad, come to an end. Sally has a gift for entering the inner realm of children’s feelings and portraying their facial expressions and body language. Her images hold up a mirror to young readers grappling with their own emotions. She has a knack, too, for the visual metaphor and her books are filled with unforgettable sketches—of pride that inflates like a big red balloon or self-righteousness that exhausts itself like a hamster racing round a wheel. Actually, every page is a piece of art.

The books do an excellent job of communicating the meaning of verses that could easily be misinterpreted by modern minds. For example, verse 2 states “May I regard myself as inferior to all,” a line that we discover has nothing to do with low self-esteem and everything to do with surrendering self-importance. In the story Now I Know . . . That I’m Not Actually Mr Wonderful, a school bully learns that by thinking he is better than others, he robs himself of the chance to learn from them. But when he opens up to others, his world expands. Every page is a work of art. Image courtesy of Sally Devorsine

A Buddhist practitioner will notice many classical teachings subtly woven into the stories, such as the Eight Ordinary Concerns, the Four Immeasurables, taking on the suffering of others, impermanence, and interdependence. Yet for non-Buddhists readers, the stories still come across as totally relatable and jargon-free, tapping into an innate sense of ethics.

It would be hard to think of a collection of Buddhist children’s storybooks more soundly endorsed than these. Both the Dalai Lama and Matthieu Ricard** sing the books’ praises, perceiving their value not only in transforming individuals but in helping to better shape the world. In his introduction, the Dalai Lama writes, “If we are to ensure a peaceful future for our world, I believe that it is important that we foster positive values like compassion, kindness, and love in our children’s minds from an early age. Certainly books like these can help us do that.”

I heartily recommend these books, too. Like every great story, the books are sure to live on in your child’s heart—creating a well of goodness they can draw from throughout their happy, healthy lives.

The Now I Know books by Sally Devorsine are published by Chocolate Sauce.

** Matthieu Ricard is a Buddhist monk and author of numerous books including Altruism: The Power of Compassion to Change Yourself and the World.