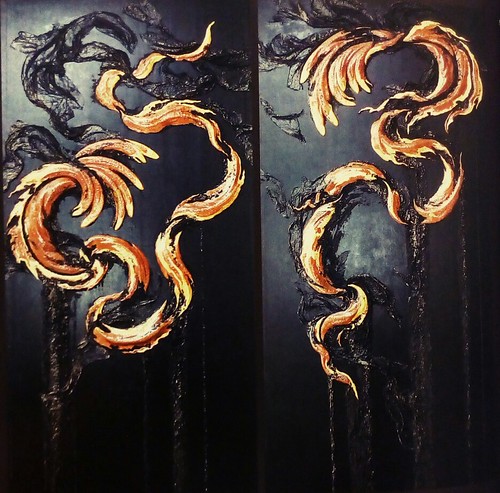 There is a mystical quality to American artist Maureen Drdak’s The Flying Nagas. Snake-like forms twist and turn upwards, lifting off the surface like wisps of feathered golden smoke, while all around them slender black shadows wind and drape themselves around the gold, binding it to the deep black ground. The title of the work connects it to Buddhist and Hindu iconography. Nagas are serpent deities, similar to dragons, and are often associated with life-giving rain and spiritual protection. Drdak’s serpents are stylized and abstracted, but their energy is still palpable, in part because this dynamic work was born from a unique artistic relationship between Drdak and a Nepalese master metalworker, sharing both her artistic spirit as well as the sanctity that infuses his and his ancestors’ creations.

Based in Philadelphia, Maureen Drdak has long been drawn to the artistic, spiritual, and mythological traditions of other cultures. She graduated from the Pennsylvania Academy of Fine Arts and the University of the Arts in Philadelphia and worked for years primarily as a painter, with a strong interest in materials and texture process. In 2005, she traveled to Nepal and visited the city of Patan, located across the Bagmati River from Kathmandu. Patan has long been a center for the arts of the indigenous Newar people, including ornate metalwork used in the creation of Buddhist and Hindu sculptures and decorative architectural elements for temples. Much of the finest Newar metalwork uses a technique known as repoussé, in which metal sheets are hammered from the front and reverse to create a design in low relief. When Drdak first encountered old copper repoussé sculptures of Hindu and Buddhist deities, she was struck by the painterly appearance of the surface patina, the result of corrosion from the elements, and became fascinated by the material and beauty of Newar metalwork. Drdak, fourth from left, with Rudra Raj, third from left, his son Rajkumar, fifth from left, Drdak's guru Rabindra, right of Rajkumar, and Rajendra, third from right, grandson Swarup, far right, and artisans of the Shakya's atelier in 2012. Image courtesy of the artist

This interest led to a unique artistic relationship with master metalworker Rabindra Shakya, whose family, tracing their lineage to 1564, worked for centuries as repoussé masters to the Malla Nepalese kings. In 2009, Drdak embarked on a unique artistic apprenticeship, spending several months studying repoussé metalworking with the Shakya atelier. To date, she remains the only foreigner to have attained technical proficiency after studying with this family. In 2011, Drdak returned to Patan, having been awarded the Fulbright Senior Scholar Fellowship for visual art for The Prakriti Project, named for the Sanskrit word prakriti, signifying both physical matter and the primal creative force that shapes it. For this project, she proposed integrating contemporary painting and repoussé, and during her Fulbright period at the Shakya atelier, she began combining the repoussé techniques she had learned from her guru with her own abstract painting. Beginning with a wooden board, she applied copper repoussé elements and fire-gilded them with pure gold, integrating them with mineral particles and acrylic to complete the composition. The first of these works was The Flying Nagas, the culmination of the Prakriti Project, which she exhibited at the Siddhartha Gallery in Kathmandu along with works by her guru. 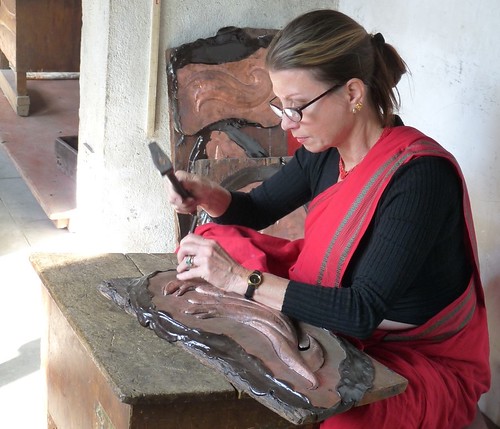 Drdak working on repoussé elements of The Flying Nagas in the atelier of
Rabindra Shakya, Patan, 2012. Image courtesy of the artist

Since her Fulbright project, Drdak has been exploring the artistic and spiritual potential of her new fusion art form in several series of work. Her 2013 Shakti Triptych is a dramatic expression of the primordial cosmic energy after which the piece is named. Here, she employs repoussé elements to evoke flames emanating from a central vertical core. Each of the three panels is named for the three gunas (cosmic states analogous to the three forces of physics and nature), which, according to Hindu philosophy, are believed to be present in all beings and things: rajas (passion, activity), sattva (goodness, harmony), and tamas (darkness, chaos). It is believed that through the interplay of these forces, prakriti manifests. Arguably the most dynamic of all her work to date is the series entitled Burning World, which she began in 2010 and has evolved into her most current series, Ardens Mundi (Latin for Burning Worlds). These circular works also feature flame-like, gilded metal repoussé elements, but here they are swirling amid a sea of red and black clouds, highly suggestive of a Buddhist hellscape or an apocalyptic inferno. Some are etched with the geometric patterning of the mandala and yantra diagrams of Tantric traditions, suggesting mystical powers and the enlightened realms of divine beings. But the realms are clearly on fire and as such represent something perilous; a reminder of the impermanence of all things, even the divine. 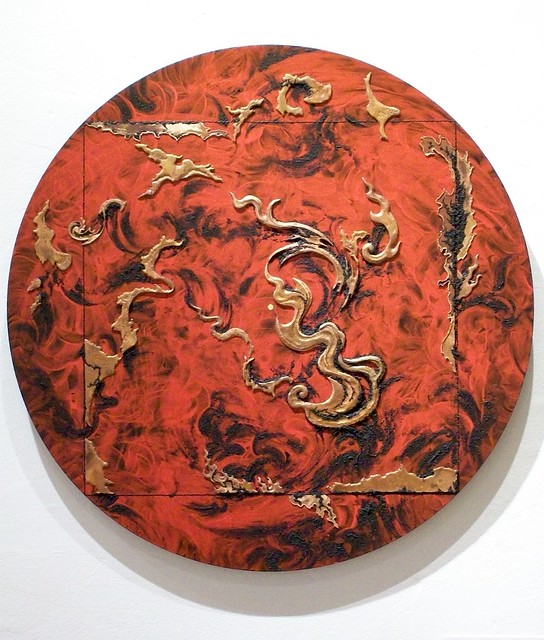 For Drdak, the Burning World and Ardens Mundi images are both ecological and spiritual in their inspiration. “They reference both the conflagratory aspect of the phenomenal world—and obviously our fleeting and subjective experience of it—the mutability and fugitive nature of existence, physically, intellectually, and emotionally.” Yet, there is tremendous beauty and energy emanating from these worlds as they burn. In works such as Ardens Mundi 1, the deep red pigment, the lavish metallic flourishes and the perfect balance of the overall composition allude to an order amid the chaos suggested by the flaming matrix. In this powerful series of works, Drdak unifies ancient and contemporary techniques from opposite ends of the globe to create an exquisitely dramatic expression of the infinitely paradoxical nature of the universe. 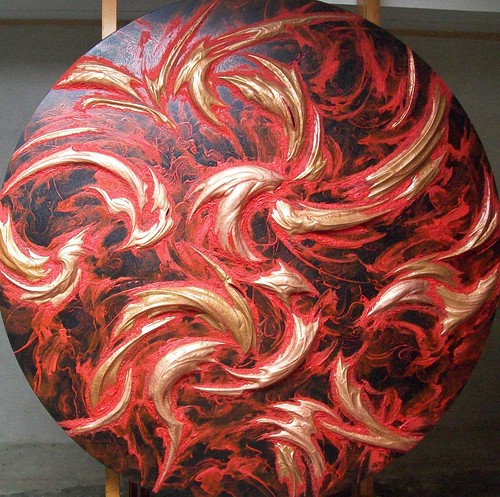