The subject of mass incarceration in the United States has long captured the imagination and concern of the world beyond the country’s borders. Mass incarceration has been the subject of numerous human rights campaigns, films, studies, and other inquiries that have sought to question the morality of this phenomenon.

The Sentencing Project, a Washington, DC-based research and advocacy center, documents that the United States has the highest rate of incarceration in the world—670 people per every 100,000 US citizens, followed in second place by Rwanda, which has 434 people incarcerated for every 100,000 citizens.

Conditions in US prisons are often harsher than in other developed countries, with longer sentences and more solitary confinement than their overseas counterparts. This is particularly true for people of color. Rather than being a correctional system (as per its description), recidivism is common and a great many offenders are caught in a samsaric cycle that instead of offering rehabilitation, becomes a lifelong process with no amelioration.

Enter the compassion of Buddhism. 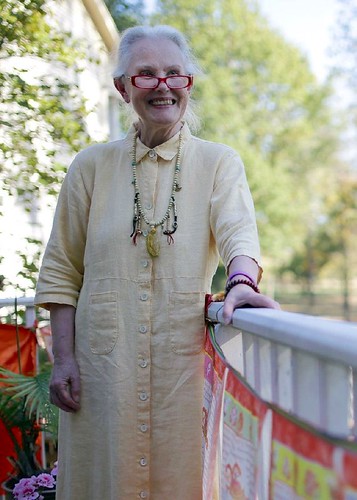 Anna Cox at her home in central Arkansas. Image
courtesy of Compassion Works for All​

Alarmed by this suffering, His Holiness the Dalai Lama in the early 1990s requested that 50 people go to serve the US prison population. One woman, Lama Anna Cox, a now-retired Arkansas social worker, psychotherapist, and a lama in the Nyingma lineage of Vajrayana Buddhism, was present and responded. Determined to put the Buddha’s words into practice, Lama Cox began to answer the heartfelt request of His Holiness.

In 1993, she received a letter from a man on death row in Arkansas. That man’s name was Frankie Parker and, at the time, he was a practicing Buddhist.

According to Morgan Leyenberger, executive director at Compassion Works for All, the organization that Lama Cox founded for the purpose of serving the prison population and their families, a certain degree of freedom was allowed because of the nature of her professional specialization.

“At the time she was allowed to just go to death row and walk around,” Morgan relates. “So she was walking around to people's cells, she was teaching meditation, and also just counseling because she was a practicing psychotherapist. So through her relationship with Frankie and others over time, she came to do prison outreach.” 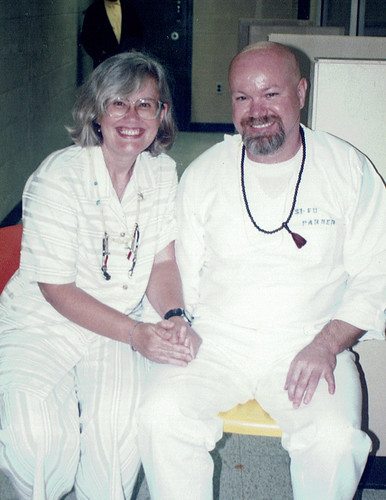 Ironically, it was Parker’s execution that contributed to the outreach work. “Frankie Parker was executed in 1996 and after his execution an article was written about him in which Anna’s name was mentioned,” says Leyenberger. “Then a few people who were also on death row around the country started writing to her. She began a newsletter to correspond with these people who were in prison. Many of them were seeking coping strategies for dealing with their own scheduled execution.”

That newsletter, Dharma Friends, continues today, and until two-and-a-half years ago Lama Cox wrote all of the content for those issues. Dharma Friends is now in its 226th issue and is distributed in all 50 US states and in five countries.

When tasked with teaching Buddhism to death row inmates, the text chosen was the Dhammapada, an anthology of verses attributed to Shakyamuni Buddha.

“Anna chose to write from the Dhammapada because she wanted a text directly from the Buddha that would be accessible to any Buddhist in any tradition,” Leyenberger explains. “She didn’t want the newsletter to be Vajrayana, Mahayana, or Theravada—she wanted it to be all-encompassing. She said that the Dhammapada is a foundational text that is instructive for us all, regardless of the path we’re on.” 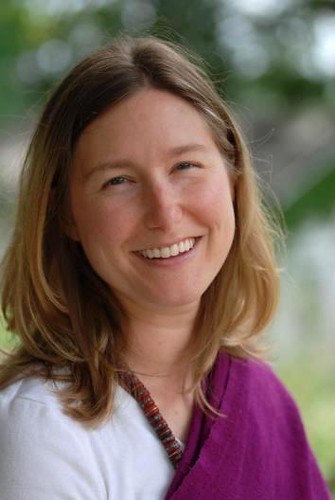 Lama Cox would write commentaries from a translation of this Pali text, integrating what she knew and what she had experienced as a psychotherapist with traditional Buddhist concepts. Gradually the circulation of Dharma Friends expanded thanks to the mindfulness of its founder. When Lama Cox would come to the end of the verses, she would begin again circling through the text multiple times to glean ever more meaning. The precious words of Shakyamuni Buddha would traverse 25 centuries, reaching those imprisoned, often in severe circumstances.

“Anna and others kept track of people in prison, so that if people would write and say that they wanted to subscribe, they had a database that they maintained, which grew organically,” Leyenberger relates. “Frequently we hear stories of people finding Dharma Friends stuffed under mattresses in solitary confinement. Someone will read Dharma Friends over and over and when they are released from solitary they will write to us and ask to be put on the list.”

A native of Arkansas, Leyenberger came to the state capital Little Rock to pursue a master’s degree in social work. She was already a practicing Buddhist in the Theravada tradition, practicing Vipassana mediation for almost 10 years. Auspiciously, one of the requirements for the social work program was to undertake an internship, and one of the professors in the program recommended that she reach out to Lama Cox.

“I had actually already heard of this woman who was a Buddhist and who was doing prison outreach,” Leyenberger shares. “Coming to Little Rock, she was on my radar, so when the professor suggested that I meet with her, there was just this instant connection. I interned with Compassion Works for All for a year and toward the end of my internship, a job position became available and so I stayed on.” 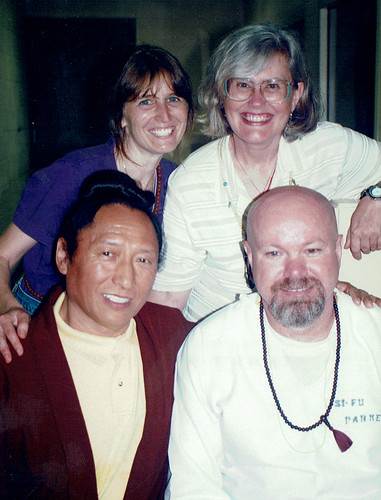 Lama Tharchin Rinpoche, Anna Cox, Frankie Parker, and a
friend on the death row unit in Arkansas. Image courtesy of
Compassion Works for All

Compassion Works for All is incorporated in the state of Arkansas as a non-profit charitable organization. The vision of His Holiness the Dalai Lama has been realized and is sustained by the compassion of several donors.

“Mostly we have individual private donors who knew Anna, or know her work. People who are interested in criminal justice reform or criminal justice issues, people who are Buddhist. Most of our funders are in Arkansas, but we also have others around the country who are familiar with our work and who are very generous,” says Leyenberger.

Today, Compassion Works for All offers ongoing support to inmates in several prison units, which includes meditation and Dharma discussion. Leyenberger also teaches a class called Conflict Resolution: “That is nine sessions and it’s a program that I developed and it really integrates some basic Buddhist principles with non-violent communication. And then it’s constantly changing too, so it’s been really interesting to work with the guys to develop and figure out what skills they want and what content they can seek their teeth into. Ultimately the class is about non-violence, peace building, and compassion.”

Other activities can include anything from “reading letters from our clients and responding, to writing and editing Dharma Friends, going to court with a client, leading meditation at the library or with public defenders, training volunteers to run their own groups and classes in prisons and jails, or leading a class myself at the prison or jail. I also fundraise for the organization—including keeping up with donors and foundations.” 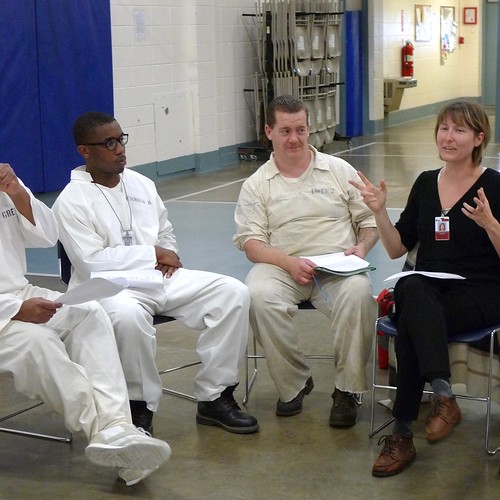 Morgan Leyenberger leading a conflict resolution class at a prison unit in
Arkansas. Image courtesy of Compassion Works for All

With a population of just over 2.7 million according US census data, the state of Arkansas spends 40 per cent of its budget on corrections. When asked if this is not too daunting of a system to work within, Leyenberger offers pure Buddhist insight, a product of many years of dedication. She sees the prison complex as a mandala, and her work there as an integrated part of her decades-long practice.

“For me there is this moment when I arrive at the unit, it’s a gravel parking lot and a huge complex surrounded by a tall barbed-wire fence and I like to just pause and really sink into what I know will be a retreat for the next two or three or four hours,” she says. “From there I just do my best to hold that intention, to experience each moment as the perfect unfolding, to experience the prison system and each person, whether they are a resident, a corrections officer, or an administrator, as part of this mandala of my own awakening and of their own awakening.”

Clearly His Holiness’s desire to serve the staggering US prison population is manifest in the work of Compassion Works for All. May it continue.

Compassion Works for All
The Sentencing Project

Venerable Tsunma Lobsang Rinchen Khandro: Acting with Compassion for All Those Suffering from Adversity
“We Have All Made Mistakes” - Teaching Mindfulness in Prisons: A Different Kind of Rehabilitation
Mithuru Mithuro - A Compassionate Friend to Drug Addicts in Sri Lanka