“You can’t call yourself an environmentalist unless you follow a vegan diet.”

My heart skipped a beat. I was in my Literature and the Environment class, an eye-opening course in my first quarter at college. The distinguished, ex-Ivy League professor covered big ideas that left me unequivocally inspired. This statement, though, I was not so sure about. A vegan diet? Was he crazy? I have a friend who’s vegan and protests outside of butcher shops, covering herself with blood to represent a human as a dead piece of animal flesh.

But my deep passion for protecting our natural environment took precedence. I started to ease myself into it by choosing from the vegan meal options in the dining hall. But too often, the prospect of pizza late at night was too tempting to pass up.

Soon after, the raging Thomas Fire (December 2017–January 2018), at that point the largest in California’s history, neared the edge of our campus. In the midst of studying for our finals, the Sun turned a diluted red through the smoke-laden air, and dangerously large particles of residue floated everywhere—the closest thing to snow here in Santa Barbara. Even worse, living on ocean-facing bluffs is increasingly dangerous with rising sea levels. Chunks of our neighbors’ backyards will occasionally crumble into the sea, underlining the short amount of time left before the entire street goes under, and perhaps not long after that, the college campus itself.

California is the most populous state in the United States and the fifth-largest economy in the world. As one of many regions around the world that are already feeling the effects of climate change, it is difficult to comprehend the enormity of the gathering crisis.

Yet at the individual level, shifting to a plant-based diet is the single most effective change we can make to reduce global emissions—especially in the US, where our domestic energy consumption is responsible for a quarter of the greenhouse gas emissions that cause global warming, yet is home to only 4 per cent of the world’s population. Clearly, a lifestyle adjustment is needed, and the best way to start is with a shift away from our culturally meat-central diets. The Earth’s ecosystem can only benefit from migrating agriculture systems toward a focus on plants instead of animals. Harvesting plants requires eight times less fossil fuel energy than raising animals. Of the world’s agricultural land, 83 per cent is dedicated to livestock, while the meat and fish industries are responsible for massive deforestation and overfishing. Researchers estimate that more than 700 million tons of food that could have been used to feed humans and combat world hunger is instead used as animal feed for meat and dairy production.

The environmental benefits of cultivating plants over domesticated animals include water conservation, as a pound of beef takes up to 200 times more water to harvest than a pound of plant food. When land is cleared for livestock, the soil is weakened, whereas plants help nourish the soil and build its resilience. Further, while plants purify the air, livestock is responsible for more air pollution than all the cars, buses, aircraft, ships, and other forms of motorized transportation in the world combined.

The more I learned about these environmental pitfalls, the more I was ready to change, although still had difficulty with long-term commitment. Vegetarian and vegan food still paled in comparison to the satisfaction of eating cheese or meat. It wasn’t until I got a job at a plant-based restaurant that I realized that food made without animal products could be just as, if not more, delicious. I was able to taste-test dishes, all colorful and consumed guilt-free, leaving me feeling energized rather than sluggish afterwards.

When the restaurant opened, I was surprised by the number of people with a range of backgrounds, ages, and reasons for being there. In my mind, vegans were a select group of hippies, instead I saw something powerful: groups of people coming together with the common purpose of making a positive change for the world.

At the individual level, eating plant-based can actually provide all the nutrients one needs and more, improving long-term health. Vegetarians are significantly less prone to heart disease, type 2 diabetes, and cancer.

Veganism—consuming absolutely no animal products—is the fight for animal rights, and ethos particular well embodied by Dr. Dawa Dolker, a Tibetan full-time dentist, who co-founded the Dharamshala Vegan Movement (DVM) under the mission that, with love and compassion, we are all one. Dawa engages her community with offerings on the street of vegan tea and plant-based milk during the day, and at night, documentary screenings promoting veganism to the public, schools, and monastic institutions. 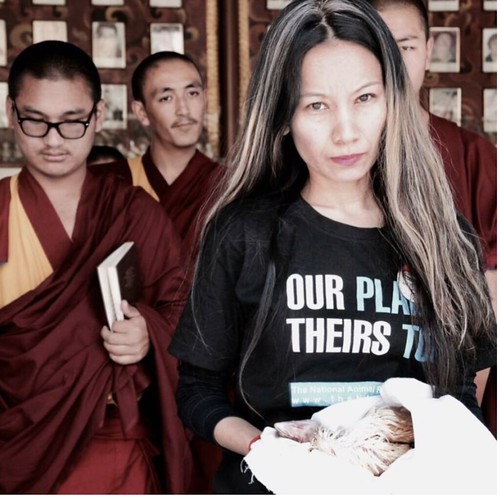 Rather than solely an environmental or health-driven lifestyle, vegetarianism is fundamentally a religious act. While it may be seen as a trendy movement in the US, vegetarianism has featured in the development of various ancient religions and spiritual traditions.

Ahimsa (Skt. nonviolence), is a Dharmic concept that recognizes all forms of life as sacred. Some schools of Buddhism encourage vegetarianism as a karmic act that acknowledges interdependency and promotes compassion. South Asians eat the least amount of meat in the world, and the counterculture movement of the 1960s in the US and Western Europe introduced a new generation to vegetarianism through interest in these religious traditions. 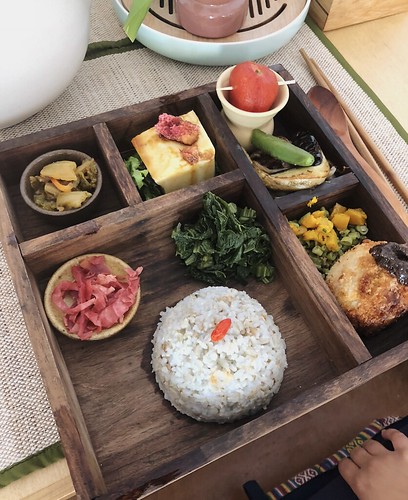 Veganism is admittedly impractical for many people, but plant-based diets can be tailored to fit what realistically works for each individual. Whether it’s becoming vegan, vegetarian, focusing your diet on more fruits and vegetables, or only cutting out meat out once a week, these lifestyle changes need not be radical. Personally, I eat vegan when I am cooking for myself or when it is under my control, but I am not going to punish myself if I am sharing a family meal or have a bite of ice cream.

And even if everyone in the world went vegan, it would not solve all of our problems. Finding balance is the key to healing ourselves and our planet, but it takes a willingness to change. What we eat is part of our culture and identity. It is not an easy change for most people, although luckily the prospect of affordable, lab-grown meat is becoming more realistic. Wishing for a sustainable Year of the Pig. From peta.org

It is easy to talk about all the things that are going horribly wrong in the world, and as individuals it is rare to feel that we have any power to make a difference. Yet I have found power in reducing my intake of animal products to improve our collective health. While I will not turn down chapstick if it contains traces of beeswax, as a fully committed vegan would, I realize that my daily decisions on what I eat do have consequences.

Eating plants is not only good for the planet, but also our health, heart, and soul. My high energy levels, clearer mind, and boosted immune system are added bonuses. I am confident I can call myself an environmentalist, and that I am taking action to leave this world a better place.

Shaelyn McHugh is currently pursuing a degree in communications at the University of California, Santa Barbara. She has a passion for the natural world and global community, and enjoys discussing artificial intelligence and food.