When we breathe in, we take in oxygen that has been created by the trees we share this Earth with. When we breathe out, we gift these trees with the carbon dioxide they need for sustenance. This is just one of the ways in which the lives of humans and trees are deeply interconnected.

Unfortunately, the Earth’s biosphere is currently out of balance, with multiple factors, including the constant rise in harmful gas emissions, putting sentient beings and plant life at risk. As we know, plant life is one of the keys to our survival, in part because it has the ability to absorb the greenhouse gases that human activity creates. National Geographic recently published an article on deforestation, stating:

“Forests still cover about 30 per cent of the world’s land area, but they are disappearing at an alarming rate. Between 1990 and 2016, the world lost 1.3 million square kilometers of forest, according to the World Bank—an area larger than South Africa. Since humans started cutting down forests, 46 per cent of trees have been felled, according to a 2015 study in the journal Nature. About 17 per cent of the Amazonian rainforest has been destroyed over the past 50 years, and losses recently have been on the rise.” (National Geographic) Trees and forests have a strong presence in the Buddhist scriptures. Shakyamuni Buddha attained enlightenment under the Bodhi tree and often encouraged his followers to meditate in forests. On one occasion, the Buddha—feeling hemmed in by his many followers (including the sangha, laypeople, and royalty)—walked into a forest seeking solitude and ease. There he came across an elephant who had left his herd for similar reasons. The Buddha concluded:

This harmonizes mind with mind—the great one’s with the great one’s—the elephant with tusks like chariot poles: each finds joy, alone, in the forest. (Naga Sutta: Ud 41)

Interestingly, the forest near Kosambi that the Buddha entered was identified as a protected forest grove, an indication that forest conservation was important during his time. In fact, the Buddha is well known for emphasizing the virtue to be gained by refraining from damaging seed and plant life (see Samannaphala Sutta: DN.2). Scholar Bhikkhu Ariyesako explains that destroying plant life was an offense of confession and that: “The common belief at the time of the Buddha was that plants (and even soil) were ‘one-facultied life.’ Today we have ecologically ‘green’ beliefs that are often equivalent—at least they seem to lead to much the same attitudes.” (Access to Insight) A tree ordained by Thai monks. From mongabay.com

The conservation of trees continues to be a concern of many Buddhists. Bhikkhu Ariyesako writes that in present-day Thailand “forest monks are well known as the best protectors of the jungle.” (Access to Insight) A perfect illustration of this is the work of Abbot Phrakru Pitak Nanthakthun, who has been ordaining trees in Buddhist ceremonies since 1990. In an interview with the BBC, he explained that he was concerned about how deforestation would impact our future so he came up with a solution to deter people from cutting down trees (from legitimate enterprises to illegal loggers). Knowing that “villagers respect monks in orange robes” (BBC) he has been leading ceremonies that render the trees sacred, a practice that has spread to many other countries, including Bhutan, Laos, Myanmar, and Sri Lanka. Buddhistdoor Global recently reported on ceremonies performed by monks and activists in Cambodia to protect their forests from illegal loggers.

Phrakru Pitak Nanthakthun’s view is that “if everyone around the world helps to save the forests, we can tackle global warming and reduce food shortages and hunger.” (BBC) At Arunyawas Temple, his sangha educates young people in the hope that they will continue to carry out the practice. 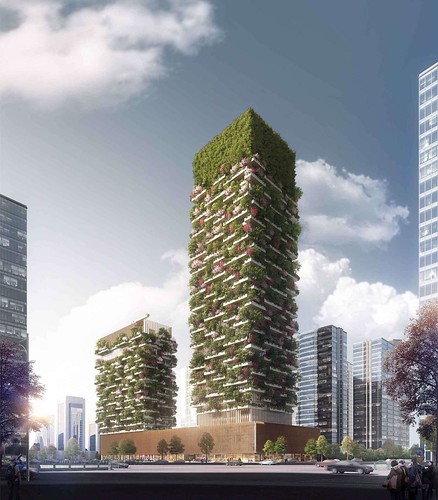 An alternative way of dealing with deforestation is by bringing more trees into cities. Here I am thinking of architect Stefano Boeri’s Bosco Verticale in Milan, which consists of two skyscrapers that support 20,000 plants. The project, which aspires to create cleaner air and more biodiversity, has won international acclaim, and has also been praised for homing 20 different species of nesting birds. The buildings are a working prototype and are subject to ongoing studies so that potential benefits and drawbacks can be measured. In an interview with Britain’s Independent newspaper, Boeri emphasized the importance of considering the environment of the city when creating these skyscrapers. “My approach is that we design a house for trees,” he says. “We really consider if the architecture has the support for trees to express their lives, their individuality. For sure, we then design the house for humans, but we start with the idea that we design for trees.” (Independent)

In China, a number of vertical forests are currently being built in a bid to address the country’s air quality problems. But will the efforts of Buddhists, activists, and innovators be enough to save the Earth from further possibly irreparable damage? Only the future will tell. As for today, we are fortunate to breathe alongside trees in a poetic symbiosis that is as old as humankind. Deforestation explained (National Geographic)
The Bhikkhus' Rules: A Guide for Laypeople compiled and explained by Bhikkhu Ariyesako – DESTROYING VEGETATION (Access to Insight)
Buddhist monk ordains trees to help the environment (BBC)
Paris has fallen in love with 'garden skyscrapers' – but will it end in highrise remorse? (Independent)

Powered by Plants: Realistic Individual Action for the Earth
Buddhism and Sustainability: A Conversation with Green Monday Founder David Yeung
Happiness Before Profit: Bhutan Seeks to Redefine Business Using Buddhist Values
A Call for Meditation in Action on Climate Change