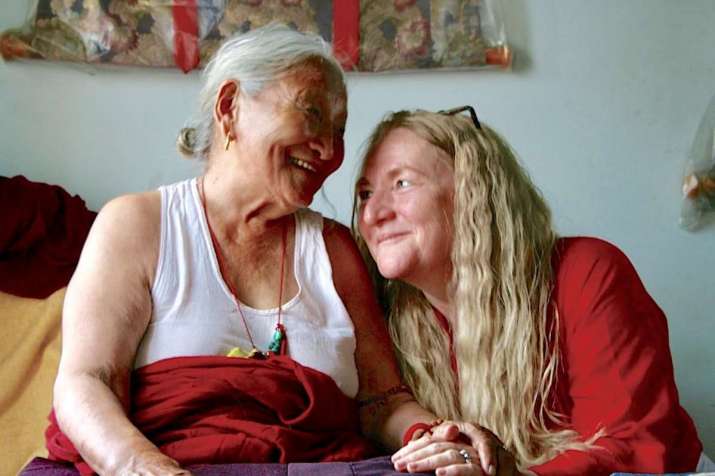 Mé-tsal with the great hidden yogini Jomo Sam’phel Déchen Rinpoche in Kathmandu. Photo by Will Rigby

I was brought up in the West, in the West Midlands of Great Britain in fact, but from an early age was intrigued by Eastern philosophies and arts. I read and attempted to understand the mystic G. I. Gurdjieff when I was about 13, and tried to teach myself to meditate not long after. My parents were entirely ordinary—an engineer and a schoolteacher—but they were also entirely extraordinary: exemplifying remarkable kindness, creativity, diligence, and humor. And they remained visibly in love throughout their 60-year marriage. They gave my sister and I the great gift of wordlessly instilling in us the absolute certainty that women are capable of achieving anything they apply themselves to. I think I was at university before I realized that there were women, contemporaries of mine, who perceived their life choices to be limited by their gender. I knew that was not right; that gender should be an expansive celebration of being, not an inhibitor.

Today I find myself committed to enabling women—and men—to liberate themselves from whatever obstacles crimp their enjoyment of life, their creativity, and their natural kindness. And I have been fortunate enough to find the perfect tradition and the perfect teachers to support me in doing this. Having spent some time practicing a Sutric Buddhist path, and exploring South American and Native American shamanism, I was clear that I wanted a non-renunciate way of practice; I just enjoy all manner of phenomena way too much to renounce them. I wanted a tradition that incorporated teachings on the ordinary magic of being. That was when the Aro gTér lineage hove into view, I met Ngak’chang Rinpoche and Khandro Déchen, the current lineage holders, and knew that I had found my teachers, and that I had come home. I remain amazed at just how perfect a fit the path of non-monastic Vajrayana is for women—and men—who wish to commit wholeheartedly to a life of practice while remaining fully engaged in the wonderful world of families, careers, and the arts.

The Aro gTér is a small yogic lineage within the Nyingma school of Tibetan Buddhism. It is known as a Mother Essence Lineage as the gTérma arose from Khyungchen Aro Lingma, a great 19th century female gTérton, tracing its roots back to Yeshé Tsogyal—the female Buddha of Tibet—and has been passed down largely through a line of enlightened women. Female teachers, and couple teachers, are particularly encouraged within the lineage and there are practices that are understood as being more powerful when the transmission is given by a woman. This is heartwarmingly refreshing in light of the continuing patriarchal influence within Vajrayana and within Buddhism. 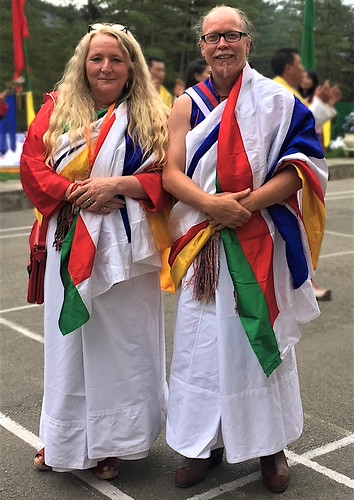 The Aro gTér is a pure vision gTérma, which primarily contains teachings from Dzogchen Long-dé—the series of space, but also includes teachings from all the Inner Tantras, and on the sutras from the perspective of Dzogchen. The ordination we take is therefore the Tantric ordination of the 14 Root Vows, ordination into the gö kar chang lo or non-monastic, non-celibate Vajrayana sangha. Gö kar chang lo dé means the stream of those who wear white skirts and keep long, uncut hair, as opposed to the short hair and red skirts of the monastic sangha. Ordained go kar chang lo women are called ngakmas or naljormas, and the men ngakpas or naljorpas. In 1975, Düd’jom Rinpoche Jig’drèl Yeshé Dorje asked Ngak’chang Rinpoche to establish the non-monastic sangha of ngakpas and ngakmas in the West, and he and Khandro Déchen have dedicated the last 40 years to doing so. This stream of non-monastic ordination is what I also now dedicate my life to propagating.

Although monasticism is the dominant form of Vajrayana Buddhist culture, non-monastic traditions have also always been available, if less visible. The style of ordination and practice within the non-monastic sanghas translates well to the West, with its emphasis on integration with daily life, careers, marriage, and families. The stream of ordained non-monastic practice however, has a long history of being relegated to obscurity. In the 1980s, for example, many academics held the view that ngakpas were a fabrication, and then when their existence was conceded, we were told that there had never been ngakmas—white-skirt-wearing, long-haired ordained female practitioners like me. That is now also understood to have been mistaken.

There have in fact been monastic and non-monastic practitioners from the very inception of the Dharma. These two streams of practice go back directly to Shakyamuni Buddha, whose principle followers were not all monastics, there were also the earliest mahasiddhas, whose meditational methodologies differed radically from the methodologies that paralleled them in monastic institutions. The mahasiddhas were men and women from all walks of secular life—merchants, thieves, kings, housewives, craftspeople, who all attained non-dual realization through practice. The tradition of the mahasiddhas continues today in lineages such as ours, where emphasis is placed on the integration of practice with every sphere of life. Mé-tsal teaching at home in Gloucestershire, with Rosa-May, daughter of one of her students. Photo by Amelia Taylor

It is the Vajrayana teachings on integration with all aspects of being in the world that I have received from Ngak’chang Rinpoche and Khandro Déchen, and that I do my best to pass on to our students, that I so treasure about our lineage. There is no area of life that is ever separate from practice; whether we’re in a business meeting with the board, eating paella and drinking Prosecco with friends, roaring with laughter at a bad joke, hang gliding across the Grand Canyon, walking in the wind with the hounds on the hill, singing the blues, stringing beans, or attending a dying friend. Whether we’re on the bus, on the stage, or on the run, on a roll, on the mend, or on the make, on the toilet, on the edge, or on our last legs and last breath . . . there is nothing but practice. The essential practice of recognizing the one taste of emptiness and form, of wisdom and compassion, of manifesting the non-dual play of our awareness and kindness at all times.

Buddhism is a religion of method rather than truth, and Vajrayana provides a cornucopia of practice methods to support that essential practice. There is a saying in Vajrayana that “a rock is not worn away by the same water;” a rock at the base of a waterfall is hit continually by new water—not hit again and again by the same water. There is no difference between water and water, in the same way there is no difference between practice and practice, all practices facilitate liberation but alternating them is thrashing the stone with fresh water. The Aro gTér contains many methods of thrashing the stone—alongside the primary practice of silent sitting, we have psycho-physical practices, yogic song, awareness-being practice, dance, crafts, and teachings on appreciation and the arts in its widest context.

Arguably the most important aspect of the gTérma is the mKha’ ’gro dPa bo nyi zLa me long rGyud—the tantra of the mirror that reflects the Sun and Moon of the khandros and pawos—an essential teaching on vajra romance as an approach to the non-dual state. This teaching on monogamous, committed relationship shows how men and women can relate with each other through appreciation of the dance of their inner and outer realized qualities. When we waken to the nature of our inner qualities, we are able to mirror each other. We are able to undermine each other’s conditioning rather than entrenching each other in dualistic patterns. If we can catch the reflection of our inner qualities before we have begun to concretize them, then romantic relationship is the most remarkable opportunity that life has to offer. Mé-tsal and Ja’gyür about to teach on the Isle of Wight, England. Photo by Jean-Michel Maheu

The Khandro Pawo teachings provide the methodology for realizing this opportunity, and that is why my partner Ja’gyür is my teacher—and I am his—and why I consider myself so incredibly fortunate to have met Ngak’chang Rinpoche and Khandro Déchen, and Ja’gyür Dorje in this lifetime. Being able to share some of the teachings I have received from them with our students—or anyone interested enough to listen—seems the best use I can make of what time I have left this time around. To this end, I’m particularly looking forward to seeing the establishment of a retreat centre, Drala Jong, dedicated to the flourishing of non-monastic Vajrayana in Britain. Our sangha, although small with about 200 people worldwide, has been fundraising for many years to fulfill the vision of Ngak’chang Rinpoche and Khandro Déchen, and we are now close to being able to purchase when we find a suitable venue.

Currently, Ja’gyür and I have only around 30 students, so we have a close personal relationship with all of them and attempt to teach them essential Vajrayana and the integration of practice with their families and lives. We have performed weddings, funerals, house blessings, and civil partnerships. Really we’re just vicars of Vajrayana, with the great good fortune of having perfect teachers.

Mé-tsal is an ordained teacher within the Aro gTér tradition of Nyingma Vajrayana Buddhism, she and her husband—Naljorpa Ja’gyür Dorje—teach publicly and have personal students in Britain, mainland Europe, and South America. Mé-tsal is also a mother, and having been a school teacher for many years she now combines her Buddhist teaching with her work as an acupuncturist and bodywork therapist. Her great passion is the propagation of the non-monastic stream of Buddhist practice—the gö kar chang lo’i dé.