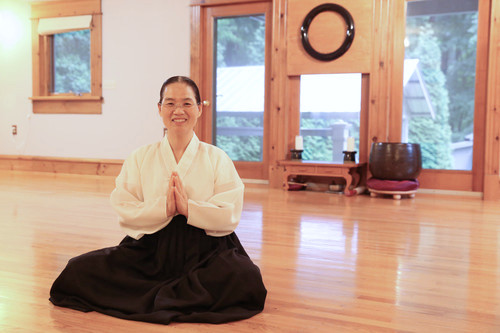 Walking home alone after a group study with my middle school classmates in my hometown of Unbong in South Korea, the dark sky looked deep and the stars seemed to be bigger than anywhere else in the world. I always felt comforted by the soft, quiet darkness that surrounded me, whether it was a snowy winter’s morning, a cool autumn evening, or a warm summer’s afternoon. I always enjoyed solitude as I was growing up. Along with the sense of being alone, somewhere my heart was filled with hope for my future.

In this small town near the mountains, I would listen to my homeroom teacher’s little homilies to our second-grade class. “As human beings, we are seeking after four great values,” he said. “They are: truthfulness, goodness, beauty, and holiness.” I contemplated what my teacher said and thought to myself: “I can find truthfulness, goodness, and beauty inside me and around me. But I don’t seem to find holiness. I’ve got to find a way to experience this.” My contemplation eventually led me to a nearby Won Buddhist temple. During my childhood, my mother was not well; she was often drunk and there was violence and uneasiness at home. School was my safe haven, but I was a loner while swinging on the playground, contemplating what my teacher had said rather than swinging for fun. One day, my sixth-grade classmate Sun Sook Yu who was slim and tall, with dark skin and big eyes, was swinging near me. At the time I did not have any particularly close friends and we had never spoken. That day, Sun Sook pulled together enough courage to say to me, “Would you like to visit a Won Buddhist temple?” At her suggestion, I just nodded. Later, I came to learn she lived right next to the temple and regularly attended children’s Dharma services because her mother was a lifetime devotee of Won Buddhism. After that brief conversation, I found myself walking toward the temple right after school.

Entering the temple grounds for the first time, I noticed many magnificent trees, and I felt surrounded by the beauty and sublime energy flowing from them. I was only 11; I felt so nervous and overwhelmed with awe that I had to gather my courage just to continue walking. As I came closer to the temple, a female kyomunim (ordained priest) sitting on the porch opened her eyes wide as she watched me walk into the temple courtyard. As I approached her, she asked me with an accent from the south, “Who are you?” “I am Jeong Sook, madam,” I responded, but my voice sounded weak like a mosquito. “Ah, I see! Young Kyoon must be your brother. Welcome!”

This warm greeting led me to attend the children’s Dharma services. After each service, I always stayed to clean up. I would position myself in the downward-facing dog yoga posture and push a rag on the wooden floor from one corner of the Dharma hall to the other. The kyomunim told me, “If you clean the Dharma hall, you will be born even prettier in the next life.” I did not distrust what she said. Actually, it did not matter whether it was true or not. Cleaning the wooden floor of the Dharma hall took some effort, but I enjoyed doing it. I still remember the smell of incense and the feeling of holiness while cleaning the hall. Each time I entered the Dharma hall, I saw a circle carved into a board about the size of a door above the altar. I did not pay much attention to the circle; I expected that one day the kyomunim would open the wooden door over the altar to reveal a Buddha statue inside. Every Sunday, when I joined the children’s service, I wondered when the kyomunim would open the door so I would get to meet the Buddha.

Then, one Sunday, I learned the meaning of the carved circle and my childish idea of seeing the door open vanished. The kyomunim asked us, “Dear little fellow practitioners, what is truth?” That was such a big question for such a little girl that I could not respond; no one responded to the kyomunim’s question. After a long silence, she said, “Truth is something that is always true,” and she introduced us to the Truth of Il-Won (One Circle), which, as she showed us, appears on the first page of the Won Buddhist scripture. She then explained that the circle image enshrined on the altar is a symbol of truth—it is the “mind picture” of buddhas and enlightened masters and the true nature of all sentient beings.

On my way home after the service, I was determined to read every word about the Truth of Il-Won. As I read, I felt as though I was deeply taking in the spirit of this profound teaching—whatever it meant to me then. I walked slowly so as not to trip while reading. My heart was filled with awe, trying to understand and cherish the powerful description of truth, as it is defined in the scripture:

Through the light of the void and calm, numinous awareness, the discrimination regarding great and small, being and non-being, appears; whereupon the distinction between wholesome and unwholesome karmic retribution comes into being; language, names, and signs also become obvious, so that the triple worlds in the ten directions appear like a jewel in hand; and the creative transformations of true voidness and marvelous existence freely conceal and reveal themselves through all things in the universe throughout vast eons without beginning: this is the truth of Il-Won-Sang. When I was in the seventh grade, I fell in love with learning English. One cold winter day, I was memorizing English vocabulary. On a sheet of paper, going from top to bottom, I kept writing the same words over and over, repeatedly pronouncing them to learn them by heart. My grandmother, who was sitting next to me smoking a long tobacco pipe, said, “As a girl, once you are married, that’s it. What is the use of studying so hard?” Her comment made me think about the unfair situation of women in society.

That was one of the moments that led me to consider becoming a Buddhist nun. But when I learned that Buddhist nuns have to follow 250 more precepts than monks, and that an elderly nun has to bow to a young monk, while a young monk does not bow to an elderly nun, I saw that there was also inequality in traditional Buddhism. I discovered a different situation when I attended Won Buddhist youth services. There, I saw active female kyomunims in the temple. The clergywomen looked to be well-empowered in their roles running the temple and teaching practitioners.

The female kyomunim in my hometown planted the seed of a big dream in me—a vision of being of service to many, not only in Korea but throughout the world. She said I could go out, far beyond Korea and work for the world. In my heart, as a little country girl, this gave me a wonderful feeling—the hope of a promising future. This was how my path began, and after 38 years, my journey continues.

After high school, as a part of novice training, I served in the Won Buddhism Oriental Medicine Clinic in Seoul before entering college. Over the course of six intense years of training—four years undergraduate and two years graduate—I took classes in Buddhist philosophies, and I received training in how to meditate and how to live harmoniously within a community. During this training, I appreciated the equality of opportunity between male and female students.

After being ordained, I served in temples in Seoul, Maryland, and North Carolina. I feel very blessed in my Dharma journey. My eyes have been opened many times whenever I have met inspirational people from different countries, cultures, and walks of life. I have learned from their stories, their sharing of joy and suffering, and their Dharma paths. Because of this, every day is new day for me. The temple in summer. Image courtesy of Rev. Won Gong When Sotaesan, the founding master of Won Buddhism, began teaching in 1916, he envisioned a practice accessible to all people. This was quite revolutionary, especially because he implemented equal power between men and women among his followers. Whenever I have participated in worldwide interfaith conferences, I have often noticed that most international faith representatives are men—except in the Won Buddhist tradition.

Won Buddhism started in Korea in 1916, the year of Sotaesan’s Great Enlightenment, after 20 years of seeking and practice. Won Buddhism is often referred to as a “contemporary, revolutionary, and easily applicable” form of Buddhism. Sotaesan set out a guide for our path: the Threefold Practice of Cultivating the True Spirit, Wisdom, and Mindful Action, along with the practice of gratitude in every moment of life. Won Buddhism enshrines the One Circle image as a model of spiritual awakening. It symbolizes our inherent true nature, into which all sages, saints, enlightened ones, and living beings awaken, guiding us to the oneness and truth of the universe.

When Sotaesan founded a Dharma community after his great awakening, he saw the profound beauty in the existing paths of Northeast Asia, namely, Confucianism, Taoism, and Buddhism. He was thrilled to realize that all the past sages had seen the Truth that he sought and saw. He did not say, “I am the new teacher for the new world;” instead, upon his enlightenment, he integrated the ancient teachings of the existing Eastern religions in a modern way.

One of the unique teachings in Won Buddhism is how to view the world. There is no eschatology or nihilism; the world is viewed as endlessly positive. When we are in our true nature and in our clear awareness, we are awakened to the constant and essential grace and beneficence surrounding us. This grace has four aspects: Grace of Sky and Earth, Grace of Parents, Grace of Fellow Beings, and Grace of Laws.

On our paths, I hope we continue seeing and manifesting Truth in our lives: “Some things are always true,” as my hometown kyomunim said. I hope more of us see and are awakened to the constant and essential grace everywhere, so that we can embody our holiness and our mindful practice of “everywhere a buddha, every act a buddha offering.” Reverend Won Gong (also known as Rev. Wow!Gong) started her training in 1988 and was ordained as a kyomunim (Dharma teacher) in 1994 after seven years of intensive training in Korea. She subsequently served in Kang-Nam Temple in Seoul and Rockville Temple in Maryland. As a pioneering Won Buddhist priest in the West, she has established temples in Chapel Hill and Raleigh, North Carolina.

Rev. Wow!Gong guest lectures at schools and colleges, provides life counseling, and leads retreats, youth Dharma camps, and cultural enrichment programs. She has been active within the international interfaith community and teaches meditation and the Dharma to people of all ages. Rev. Wow!Gong is a leading Korean-to-English translator of Dharma teachings. She is a kind, compassionate, wise, and experienced teacher who also loves gardening and singing; she recently released the CD Chants of Samadhi for Daily Practice.