Buddhism provides the guidelines for TTDH staff, both monastic and lay. Image courtesy of the author

For most outsiders, especially those in the West, Vietnamese Buddhism is typically synonymous with Thich Nhat Hanh (who incidentally resides not in Vietnam but in France). Or, going back a few decades, the now-iconic image of Buddhist monk Thich Quang Duc, who set himself on fire at a busy Saigon intersection in 1963 to protest the persecution of Buddhists by the South Vietnamese regime led by Ngo Dinh Diem.

Although more than half of Vietnam’s population is nominally Buddhist, Vietnamese Buddhism remains relatively unpublicized to the outside world. And despite modernization and rapid economic development, religion is still a much-guarded subject in Communist Vietnam. Under the Ordinance on Religion and Belief, the government has control and oversight of religious organizations, which must be officially registered. 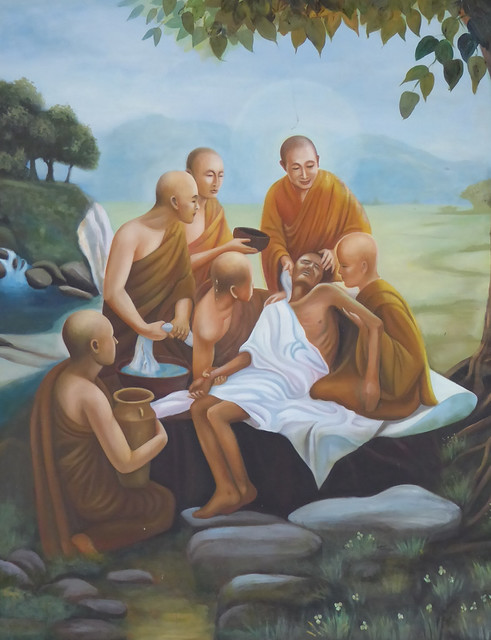 This painting in a TTDHC clinic reflects the spirit of the monastics who attend to
the sick with compassion and kindness. Image courtesy of the author The Vietnam Buddhist Sangha (VBS) is the only recognized religious organization and representative of Buddhist monks and nuns, and lay followers in Vietnam and overseas Vietnamese communities, with jurisdiction over the 49,500 monks and nuns, and 17,376 temples and monasteries throughout the country. Because of its state-sanctioned status, the VBS is regarded with suspicion by some. Nonetheless, there is no denying the important role it plays in Vietnam. Besides scholarly pursuits, Vietnamese monastics actively engage in social and charitable work—in education, Dharma propagation, caring for those affected by the Vietnam War, the elderly and orphans, environmental protection, and in particular in the field of medicine and healing.

Following the footsteps of the Great Medicine Monk Ven. Thich Tue Tinh,* the VBS operates about 162 tue tinh duong (charity medical clinics), which offer traditional medicine and acupuncture to the poor, especially those in remote regions. What distinguishes these clinics from other Buddhist medical charities, such as those found in Taiwan and Hong Kong, is that many of the doctors and medical practitioners are monks and nuns, well trained and qualified in medicine. 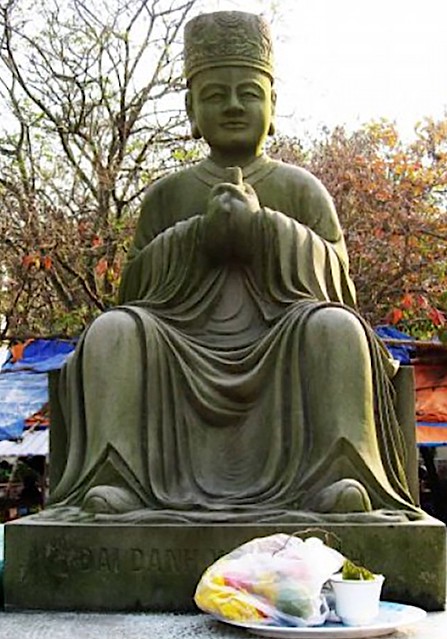 A male lay nurse checks the pulse of a monastic patient. Image courtesy of the author

One of the most established is the group of medical clinics operated by Tue Tinh Duong Hai Duc (TTDHC) under the umbrella of the Hue Buddhist Sangha in central Vietnam. Established in 1989, TTDHC is a charity providing free medical care and treatment for the monastic sangha and the entire Buddhist community in Thua Thien Hue Province and the surrounding areas. The organization is headed by 72-year-old Venerable Thich Hai Ann, chief abbot of Tu Dam Pagoda, who is himself a qualified medical practitioner from Hue Medical University.

For Ven. Thich Hai An, serving the people’s medical needs is seen as very much a part of the bodhisattva’s practice emphasized in Mahayana Buddhism. “In Buddhism, serving all living beings is the same as making practical offerings to the Buddha,” he observes. “We need the Dharma for the mind and medicine for the body. Without a good physical condition, one cannot attain spiritual uplifting. Hence by providing medical care, we are also helping the people to build up their merits and wisdom.” 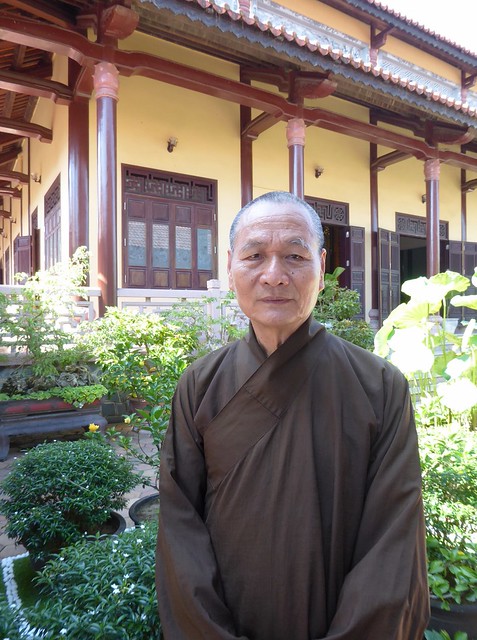 Many of the monks and nuns at TTDHC are trained at Hue Medical University. Image courtesy of TTDHC 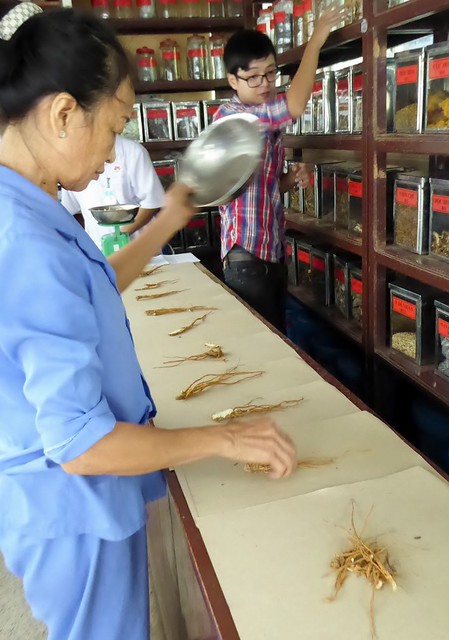 Because of the high cost of traditional Chinese medicine, a nominal fee
is charged. Image courtesy of the author A nun and nurse check pharmaceutical supplies during a medical mission. Image courtesy of TTDHC

Uncle Chu, an elderly patient who has been receiving treatment at the clinic for some years remarked, “The monk doctors here are very kind and caring. The medicine is free. This is of much help to poor people like us who cannot afford to go to the local hospital. The doctors also advised me on how to take better care of myself, like teaching us qi-gong and eating healthily.”

The TTDHC clinic in Truong An Ward also has a counseling room, providing support for more than 120 HIV patients in the province. Ven. Thich Tam Quang, the 39-year-old deputy director of Tue Tinh Tinh Hai Duc explained: “The Buddha directed us to do good and to relieve suffering. As Buddhist monks, it is our way to practice compassion and kindness. It is the responsibility of a monk to take care of people, regardless of whether they are rich or poor. We cannot discriminate against anybody, what kind of illnesses they have, or whether they are men or women.” 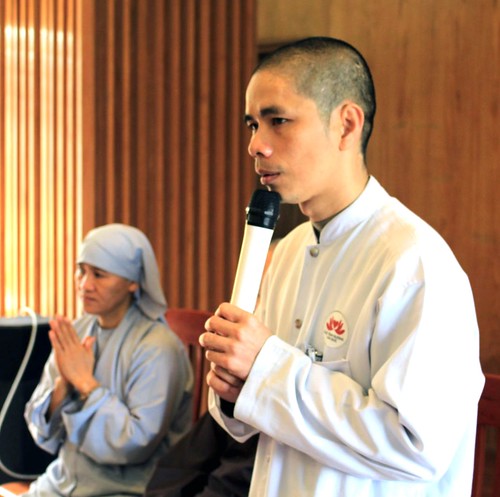 Children receive schooling needs and learn about health and hygiene from the nuns of TTDHC. Image courtesy of TTDHC

In 2013, TTDHC established the Hai Duc Community Support Centre, with the aim of empowering local communities to engage in sustainable development and improve their quality of life. Public awareness programs are conducted on different topics—the environment, gender equality, livelihood, health and hygiene, and disaster response. To date, more than 10 programs have been organized to educate the public on the importance of environmental protection, its impact on human health, and the shared responsibility of the communities. Such programs create a platform for stakeholders to share and exchange knowledge related to environmental protection, common health problems and diseases, and primary rescue and first aid skills in case of emergencies.

Working with other charity groups and grassroots organizations, Hai Duc Community Support Centre also mobilizes its resources for medical missions in remote areas with little or no access to medical treatment and healthcare. Each of these missions may last for a few days as hundreds of patients receive consultations, prescriptions, eye treatment, and even ultrasound scans and electrocardiograms. In addition, TTDHC also distributes dry rations and other daily requisites to needy families, and schooling needs for children. 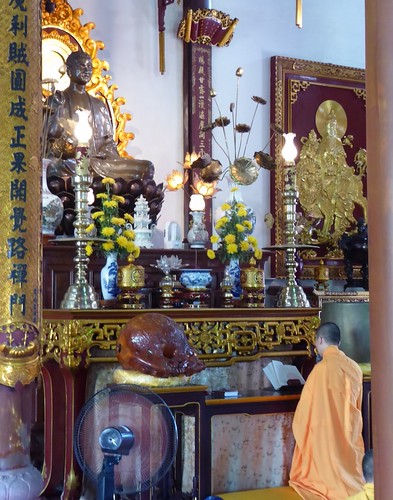 Out of the white robes, the monks and nuns of TTDHC perform
their monastic duties at the temples. Image courtesy of the
author

Although the monks and nuns spend a large part of their day at the clinics, they are constantly mindful of their monastic roles. Ven. Thich Tam Quang shares: “Beneath our white medical cloaks, we are in monastic robes. When we are at the clinics, we perform our duties as doctors. But back in the temple, our lives are like those of other monks. We start with chanting and meditation in the morning. After working in the clinic, we return to our temple and carry out our monastic duties and meditation.”

This idea of monks and nuns in white directly attending to patients of both sexes would be unthinkable in the conservative Theravada traditions, where a monk—even if he is fully qualified with a law degree—would not be permitted to practice law because of the prohibition against donning a lawyer’s robes. But as Ven. Thich Tam Quang observes, “It is important to keep our minds clear and undefiled through meditation. This way, we can serve everyone wholeheartedly with compassion and humility, and without discrimination.” A nun serving in the pharmy at TTDHC. Image courtesy of the author Traditional Chinese medicine is the foundation of the Tue Tinh Duong charity clinics. Image courtesy of the author

In contrast to the conservative Theravada Buddhism in nearby Thailand, Myanmar, and Laos, Vietnamese Buddhism has emerged from a tumultuous past with a unique mix of Chinese Buddhism, Confucianism, and Vietnamese traditions. Indeed, in their own practical way, the monks and nuns of Vietnam have managed to carve out a socialist form of Buddhism, redefined their roles, and made themselves relevant to the people in a modern era.

Looking ahead, Ven. Thich Hai An stresses: “Buddhism and society must progress together. Buddhism, people, and country are inter-related. The monks and nuns must feel the pulse of the people. Only when the people are with us, then Buddhism can grow and thrive in this country.” Ven Hai An and staff of TTDHC, Truong An Ward. Image courtesy of TTDHC

* Tue Tinh (慧靜禪師, 1330–1400) lived in the late Tran dynasty (1225–1400) and is often referred to as the God of Medicine or the Great Medicine Man. He made significant contributions to the field of traditional medicine in Vietnam, introducing many different methods of natural healing. He also set up medical facilities in temples and villages. It is documented that in 30 years of operation in rural areas, Tue Tinh built 24 temples, turning these pagodas into medical clinics. He also compiled medical records that includes 182 diseases treated by 3,873 remedies. See “Tue Tinh: Founder of Vietnamese Traditional Medicine” by T. N. Dung and Gerard Bodeker, in The Journal of Alternative and Complementary Medicine. July 2004, 7(5): 401-403. Link

A Path to Peace: The Engaged Buddhism of Venerable Tajay Bongsa
Kim Cang Monastery – the Blossoming of an American Temple
Buddhism in Northern Europe: A Snapshot - Khuong Viet Temple, Norway