Brick stupa with Buddhist carvings discovered in 2012 at Moghalmari. Photo by Sushanta Patronobish. From archaeologynewsnetwork.blogspot.hk

The village of Moghalmari in the eastern Indian state of West Bengal is a site of historical and archaeological significance that reflects the colorful history of the Bengal region. Among the most interesting archaeological remains is the Moghalmari Monastery Buddhist heritage site (also known as Dantapur Buddhist Monastery), which was documented in the travel journal of the Chinese Buddhist monk and scholar Xuanzang (c. 602­–64), who famously made a 17-year overland journey to India. In recent years, it has returned to the limelight thanks to the work of Professor Asok Datta (1947–2012) of the University of Calcutta’s Department of Archaeology, who identified this expansive historical site as an early medieval Buddhist settlement believed to have flourished from the 6th–12th century.

Moghalmari is located on the left bank of Subarnarekha River in the district of West Medinipur, 3.2 miles north of Dantan Railway Station and 1.2 miles south of Nekurseni Railway Station. The site covers an area of some 4,300 square yards and is considered the largest and oldest archaeological excavation in West Bengal. 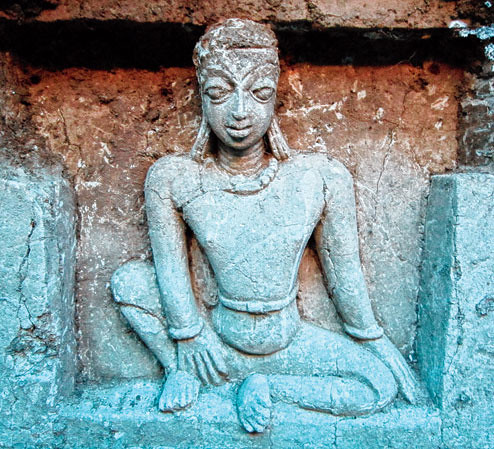 Stucco sculpture discovered at the site. From maamatimanush.tv

According to Sreecheta Mukherjee, editor of Chitrolekha International Magazine on Art and Design, the site was first discovered in 1873 by British surveyors and archaeologist and historian Nagendranath Vasu. Following a survey of the area, Vasu remarked in his book The Archaeological Survey of Mayurabhanja (1911): “By the side of the entrance into Mughalmari from the side of Dantan is a mound generally called Pathcala of Sashisena. Completely lost in ruins now, it was at one time a big structure of oblong shape, measuring 120 ft from east to west and 110 from north to south. Hidden under its debris, and scattered all around are to be found heaps of large bricks; and elderly natives assert that formerly a much larger quantity of this material was lying about in the heaps which the people of the adjacent villages have since utilized for their private purposes.”

In 1999, a team of experts including professors Asok Datta and Bratindra Nath Mukherjee, both from the University of Calcutta’s Department of Archaeology, traveled to Moghalmari. After conducting an initial inspection that confirmed the site’s historical importance, they decided to start excavating. 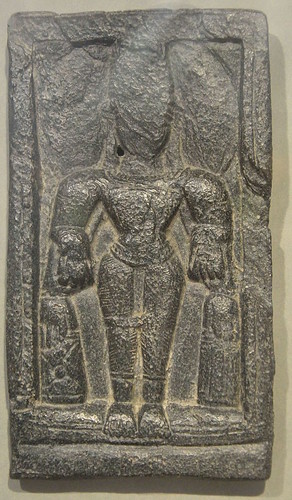 Stone figure from the 5th–7th century found
at Moghalmari. From Wikipedia

Their first excavation began in 2003. The team divided the site into three sections: MGM1 included the mound of the main stupa with bricks scattered around the area, locally known as Sakhisener Dhibi or Sashisener Dhibi, while MGM2 consisted of a number of circular brick stupa bases with pottery artifacts strewn over the surface. MGM3 covered a large area next to a pathway. Under the supervision of Prof. Datta, the first phase of excavations from 2003­–4 revealed a brick wall 87 feet long and 3.7 feet high within the structure of the temple, as well as rectangular structures believed to be monks’ cells. In the MGM2 section, the archaeologists unearthed three circular brick stupas, five similar but smaller stupas connected to the site’s main stupa, and a large number of artifacts such as terracotta lamps, seals, and pottery reflecting the influence of the Gupta Empire, which ruled much of the subcontinent from 240–550 CE.

The second phase of the excavation took place from 2006–7, during which the team found an extensive wall featuring stucco decorations, and a Buddha image. They also found evidence of another structure below the existing excavation in MGM1, but were unable to examine it due to the upper mound structure. 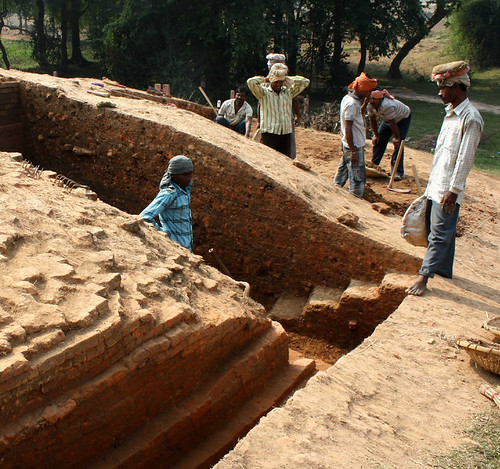 The third phase of excavations, from 2007–8, included work on MGM1 and MGM3 and unearthed a long wall covered with stucco designs of flowers and animal and human figures. A few stone sculpture fragments, including one bearing proto-Bengali script, a copper coin, a large number of decorative bricks, and shards of pottery were also found. The most remarkable discoveries in this phase were in MGM3: four terracotta seals, two of which bore the inscription “Srivarma.” Datta dated the seals to the 7th–8th century. A fourth phase of excavation was conducted from 2009–10, during which the team unearthed a beautiful brick gateway at the northern part of the monastery, decorated on either side with two brick pillars and crowned with a carved representation of a purnaghata (water urn).

During the fifth phase of excavation from 2010–11, the team unearthed the massive southern wall of the monastery, ornamented with stucco and lime plaster lotus flowers, lotus petals, and human figures. A circular votive stupa and a large number of terracotta lamps were also found. During the sixth phase of excavation from 2011­–12, the team further examined the previously unearthed southern wall, discovering terracotta lamps, stucco fragments, iron nails, footed bowls, spouted bowls, and other pottery. The most recent excavation at the monastery took place on 24 January this year and revealed more than 40 bronze artifacts that have been dated to the 5th–6th century. The dig coincided with the start of the two-day annual Moghalmari Festival, attended by Buddhist monks from across the country, who held a special prayer ceremony. A seminar on Bengali polymath and Nobel laureate Rabindranath Tagore’s (1861–1941) writings on the Buddha and how his teachings inspired the Hindu monk Swami Vivekananda (1863–1902) was organized for the festival by the Kolkata-based Bauddha Dharmankur Sabha (Bengal Buddhist Association).

“We are going very slow with the digging work as relics are strewn across the entire zone. Finding over 40 antique figurines in a single day is definitely rare and prized. We are thrilled beyond explanation,” said archaeologist Prakash Maity, who was in charge of the latest excavation. “Earlier, we found stucco figurines, gold, silver, and mixed metal coins, pendants, votifs, and seals.” (The Times of India)

Among the latest artifacts to be uncovered were images of the Buddha, the bodhisattva Avalokiteshvara, and the female deity Saraswati. The images ranged from 2.8–9.8 inches in height and 2.3–4.7 inches in width. Perhaps the most exciting discovery was that of seals with inscriptions revealing the monastery’s name as Sribandaka Vihara Aryabhikkhu Sangha and confirming that it was founded in the 5th–6th century. The evidence gathered so far suggests that Moghalmari Monastery represents a significant chapter in India’s Buddhist history, while the valuable antiquities recovered from the site will help historians understand more about Bengal’s history. Due praise must be given to the state government of West Bengal, which has helped fund the excavation, with more than Rs30 million (US$442,000) already spent. The state government has also established Dantapur Museum to house and catalogue artifacts from the site.