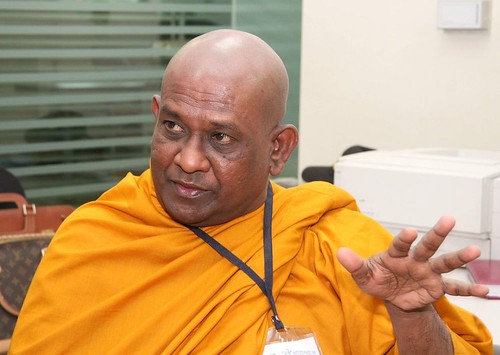 Nimal takes a deep breath to calm the swirling emotions welling inside of him as he walks up the dirt road that leads to the Mithuru Mithuro Centre in Pelmadulla, Sri Lanka. His mind flashes back to four years ago, when he first trod this path. Those were the darkest days of his life. At 17, Nimal was introduced to different kinds of pills at clubs after high school, and then to heroin. A model student from a top school in Colombo, his unsuspecting parents gave him money whenever he asked for it. Initially he bought the heroin from his friends, but soon became part of the network, connecting with suppliers. When his parents found out about his addiction, they sought treatment at various hospitals, but to no avail. Eventually, they sent him to Mithuru Mithuro. It was a turning point in his life. With fierce determination and the help of a compassionate friend, he found the strength to defeat the demons inside of him. That friend is Venerable Kuppiyawatte Bodananda Thero, or Rev. Bodi as he is fondly called, the founder of the Mithuru Mithuro Movement in Sri Lanka.

Initiated in 1984, Mithuru Mithuro, which itself means “compassionate friend,” was started primarily to help the poor rural communities in Sri Lanka, and particularly the youth. But in 1987, when the judiciary directed four young drug offenders who were on parole to Rev. Bodi, the humble shack nestling on a hill against the Sinharaja Rainforest became a halfway house, providing in-house treatment for prisoners with drug offences before they re-enter society. Thus, the Mithuru Mithuro Movement became the first Buddhist drug rehabilitation center in Sri Lanka. Today, there are 80 men undergoing treatment at the center, aged between 16 and 35. Rev. Bodi recalls his childhood experience: “As a child, I lived near Welikada Prison in Colombo. I used to see prisoners being led, bound by chains around their hands and legs. I was deeply troubled by the treatment meted out to them and decided that one day I would do something that would help those marginalized by society to live with dignity, be they be prisoners or drug addicts. I want to create a virtuous society, a society where compassion, tolerance, gentleness, honesty, wisdom, and equanimity thrive to the fullest and where people disdain all that is harmful to others.” Even as a young monk at the Pathaka Buddhist Training Centre for Novice Monks, Rev. Bodi was already working with convicted prisoners. He has made it his mission that those who come to Mithuru Mithuro abandon their addictions and lead happy and meaningful lives. To equip himself for the challenge, Rev. Bodi traveled to New York to receive training in the Daytop program, one of the oldest and most successful drug treatment programs in the United States. Based on the therapeutic community model, the program emphasizes the role of peer interaction in a “supportive emotional community in which people feel secure but at the same time are held strictly accountable for their behavior.” (Wikipedia) A full-day meditation program is held once a month

Back in Sri Lanka, Rev. Bodi combined the Daytop approach with Buddhist practices to develop a unique, faith-based program that incorporates such activities as spiritual counseling, daily meditation, and Buddhist chanting. Just as Buddhist training aims at liberation through personal effort, the Mithuru Mithuro approach stresses the importance of self-reflection and self-realization. Rather than seeing addicts as criminals to be reformed through harsh punishment or force, they are treated with compassion, acceptance, respect, and dignity in an atmosphere of amity and harmony.

In Rev. Bodi’s view, drug addiction is neither incurable nor hopeless: “Why do people turn to drugs? It is out of ignorance and craving. Many people tend to stigmatize and marginalize drug addicts and say that it is impossible to reform them. This is mere prejudice, because every individual has the potential to develop himself and achieve the highest of human values. Reformed addicts can lead successful and happy lives and contribute positively to society.” 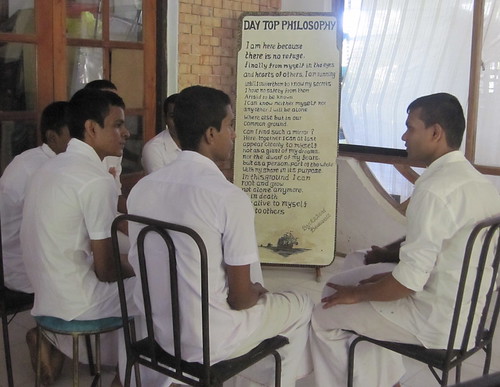 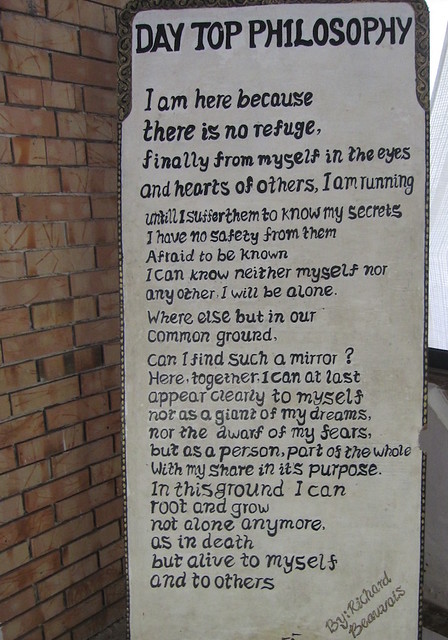 The philosophy of recovery

At Mithuru Mithuro, programs are directed at creating opportunities for recovering addicts to reflect upon their actions and to develop camaraderie, open dialogue, and honest sharing. In this big family, everyone is responsible, not only for himself, but also for others. For example, in one program, participants take turns to ask who is responsible for failing to do certain tasks such as cleaning the dirty glasses, or for messing up the kitchen. Without pressure from others, the guilty party owns up and thanks their “brother” for pointing out their shortcomings. At the same time, they offer constructive ideas on how to do the tasks better or how to improve themselves. Rather than fault-finding and blame, words of appreciation and forgiveness are offered. In another session, participants write the good qualities they see in some of their peers and put the slips of paper into envelopes marked with the corresponding names. Such praise helps bolster a sense of well-being and self-esteem, which is often lacking among drug addicts. By openly sharing their individual journey of recovery, addicts know that they are not alone in their struggle. Through mutual support and motivation, they find the strength to overcome their inner fears and insecurity and develop confidence and self-worth.

At Mithuru Mithuro there are no closed doors. Ex-addicts, recovering addicts, and their families are encouraged to visit any of its centers for moral support and to volunteer in its activities. The Parents Support Group engages parents and families by providing guidelines and counseling, security, and back-up support. Through workshops and seminars, they learn about the importance of family unity and values for drug addicts on the road to recovery, such as the sharing of feelings, love, communication, and understanding. 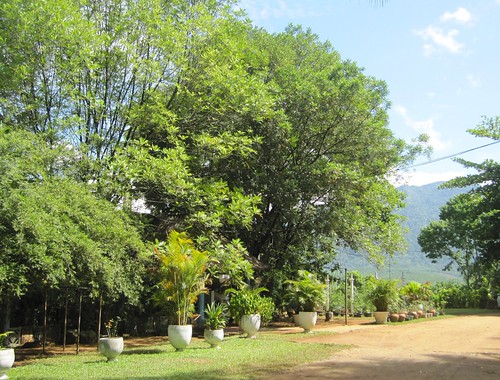 The Mithuru Mithuro headquarters at Pelmadulla

Ex-addicts are encouraged to get involved in the center’s programs in order to stay drug-free. For example, together with recovering addicts, they stage theater, street plays, and cultural events to convey their experiences to the public and deter others from going down the same road. Ex-addicts who have managed to stay drug free for three years and are leading quality lives are awarded the “Life time Achievements National Award for Overcoming Negative Elements,” a recognition that both serves as an incentive not to relapse and provides a strong motivation to strive for a meaningful life.

For Nimal, recovery has made him see how much suffering he caused previously. “I was naive to think that some people I associated with were good friends. My heroin addiction only hurt my family and those I love,” he says. Having made a full recovery, he now serves as a group leader and gives talks to schoolchildren and the public about the detrimental effects of drug use. In fact, every social project is used as an opportunity to mobilize community participation in the fight against drugs. Various outreach programs organized by Mithuru Mithuro target vulnerable schoolchildren, youths, and adults to prevent them from taking drugs, and also recovered ex-addicts who are not in contact with the parent body in order to prevent them from relapsing. Street children and orphans are given shelter and education to keep them off the streets, and programs such as human values development, emotional therapy, leadership training, counselor training, and skills development keep the youths occupied.

With a success rate of 45 per cent and more than 5,000 young people completely reformed, the Mithuru Mithuro Movement is recognized as a leader in drug rehabilitation and reformation not only in Sri Lanka, but also abroad. It operates ten centers island-wide that house more than 400 residents in various stages of rehabilitation. 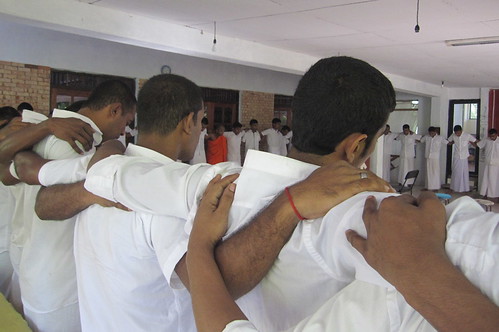 For his dedication, Rev. Bodi was presented with the Nalanda Keerthi Sri award in 2009 by his alma mater, the prestigious Nalanda Vidyalaya in Colombo, and the Orval Hobart Mowrer Award in 2010. Besides serving as Secretary of SL-FONGODA, an organization of all non-governmental organizations working on drug rehabilitation, he is also vice president of the Asian Federation of Therapeutic Communities. But for Rev. Bodi, the greatest reward lies is seeing the people he has helped to break free from the clutches of drugs reintegrate into society and lead virtuous and happy lives. Rev. Bodi’s wish is not to see more people coming for treatment, but for the numbers of addicts to decrease. “In this country, 70 per cent of the population recites the [Buddhist] Five Precepts daily. The Fifth Precept teaches us to abstain from taking intoxicating drinks and drugs, which lead to carelessness. Yet so many people are turning to drugs, alcohol, and cigarettes, etc. Why? What we really need to do in our homes, schools, and temples is to teach how to apply these guidelines in our daily lives, in very practical ways. It is something we have to seriously reflect upon, and then perhaps we can make the real transformation.”