For the last three years, I have been conducting a photographic investigation of the life, culture, circumstances, traditions, and the new homes, settlements, and monasteries of the Tibetans in exile. To this end, I have traveled to Kathmandu, in Nepal; to Ladakh, in Jammu and Kashmir; and to Bir and Dharamsala, in Himachal Pradesh, India. Most of the Tibetan refugees live in India and Nepal, and among them are many Buddhist masters, who were urged to leave Tibet to save their lives and thus the precious teachings following the Chinese invasion in 1959.

In January this year I visited Clement Town, a Tibetan settlement in Dehradun, Uttarakhand, India. Clement Town is home to the re-established Mindrolling Monastery (1965), one of the six main monasteries of the Nyingma tradition in Tibet and among the greatest Buddhist centers of this lineage remaining today. An unbroken lineage of great masters has been maintained at Mindrolling, continuing up until the present day. Mindrolling Monastery in Clement Town is a serene oasis, not in the ordinary sense of a place that makes you feel good, like a nice beach, but an oasis in the sense of a place of purity. It is our mind that makes and shapes our reality, and at Mindrolling, universal responsibility is taken very seriously in that a great many nuns, monks, and lay practitioners undergo serious mind training here with the intention of bringing order to the world. The monastery is thus an inspiring example of the practice of the pure and profound Dharma of Vajrayana Buddhism. It is also home to Ngagyur Nyingma College, where monks receive advanced training in order to preserve the unbroken lineage of teachings and pass them on to the next generation of practitioners.

A unique symbol of this pure intention is the World Peace Stupa, which stands within the monastery compound. One of the largest in the world, the stupa is 185 feet high and 100 feet square. It is said that through seeing a stupa, one can attain liberation in just one lifetime. Like most such sayings this one is multilayered, but can be understood to mean that by seeing the beauty of a stupa either in person or in an image, one can be inspired to set foot on the path to liberation. 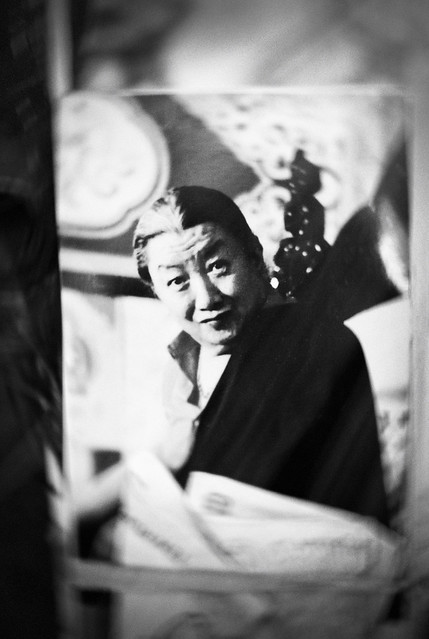 And beautiful this stupa is indeed! Inaugurated in 2002, it is unique in that one can access the interior. This contains five shrine rooms: to Padmasambhava, or Guru Rinpoche, who brought Buddhism to Tibet in the 8th century; to the historical Buddha, Shakyamuni; to the Ati Zabdön Nyingpo revelations of Terdag Lingpa (1646–1714), the original founder of Mindrolling; to the Mindrolling lineage; and to the Dzogchen teachings, the highest teachings in the Nyingma lineage of Buddhism. These shrines are thus authentic examples of Tibetan Buddhist history and philosophy, and their artwork is superlative.

The World Peace Stupa in itself is a treasure of Buddhist architecture. A stupa is rich in symbolic meaning: it is said to represent the physical form of the Buddha as well as his journey to enlightenment, starting from the base and culminating in the jewel at the apex, which represents his awakening. Likewise, our own awakening is enabled through the triumph of discriminating wisdom over ignorance, the root of suffering. Hence the stupa represents both the motivation and the path to achieve a higher purpose of life, beyond competition and struggle, clinging and obsession, and helps orient our mind toward a freer, less ego-driven state. Shrine room to the historical Buddha, Shakyamuni, inside the World Peace Stupa The details of the stupa’s symbolism are of course much more complex than this, indeed, as complex as the investigation, study, and eventual liberation of our own mind. In this regard, the design of this stupa with its interior shrine rooms is especially remarkable. Contained within the shrine rooms is the entire “cosmos” of the mind, represented by the diverse symbolic accoutrements of Tibetan Buddhism: statues, wall paintings, a three-dimensional mandala, and thangkas . . . in brief, the qualities these exemplify inspire us to work towards cultivating these same qualities within ourselves.

The World Peace Stupa is thus a place of Dharma, teachings, empowerments, blessings, and prayer. It opens the door to the truth for all who want to hear it. When one exits the stupa and turns to look at it again one is struck by its grace and majesty, which impart a sense of magic. And both beauty and magic are qualities of love, which, again, represents the awakened mind. The World Peace Stupa at twilight

This love generates a deep gratitude for the noble intent of Mindrolling Monastery and for the beauty of life itself. It could not be better expressed than in the words of the female master Mindrolling Jetsün Khandro Rinpoche, the daughter of the 11th Mindrolling Trichen (1930–2008) and a holder of the lineage of Jetsunmas descending from Terdag Lingpa’s daughter herself:

“Gratitude spreads happiness. So open your eyes and look around the richness of creation around you. You are here now today. You are amidst this wondrous display. In silence and grace spend a moment to feel the interconnectedness between yourself and the entire universe. And whenever you experience this grace flow within you, you will find gratitude.”*