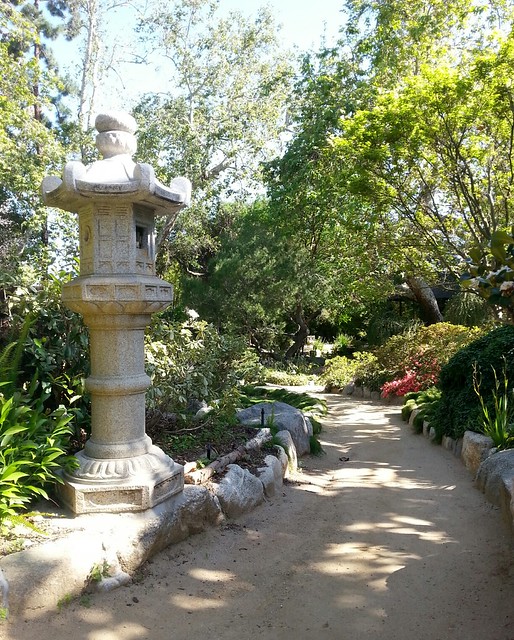 Japanese gardens, in Japan and overseas, are places of peace and tranquility that encourage relaxation and mindfulness. In particular, the dry landscape or kare-sansui gardens of Kyoto’s Zen Buddhist temples, originally designed to prepare Zen Buddhists for their meditation practice, are known around the world for their austerity, simplicity, and ability to slow down—if not still—the minds of those who visit. However, there are other types of Japanese garden that are more secular in function but still contain Buddhist elements that invite mindfulness and contemplation. One type is the strolling garden, or kaiyu-shiki-teien, a style of garden that originated on the estates of Japan’s nobles and military lords in the 17th century. Very distinct from Buddhist temple gardens, these strolling gardens were created primarily for pleasure and enjoyment and have been recreated around the world as oases of Japanese natural design and aesthetics. While visitors to such gardens readily revel in their natural beauty and elegance, they are not always aware of the elements that connect the gardens to Buddhist philosophy and the tea ceremony that has so powerfully influenced Japanese spiritual culture. One such strolling garden—very close geographically and emotionally to the author—is the Storrier Stearns Japanese Garden in Pasadena, California. Originally built in the 1930s for Charles and Ellamae Storrier Stearns, a wealthy East Coast couple with a love of Japanese culture, the garden is not only a beautiful natural space but also a unique location for meditation, contemplation of Buddhist philosophy, and mindfulness practice in the heart of Southern California. Upon entering this strolling garden, visitors pass through a wooden gate and are immediately surrounded by the subtlest of color schemes—plants, bushes, and trees in an assortment of greens and only a dash of pink or yellow where a solitary tree or flower blooms amid the greenery. While traditional European and Middle Eastern gardens tend to feature a profusion of color and fragrance to stimulate the senses, Japanese gardens are generally designed to mimic nature, with irregular, asymmetrical placements of rocks and plants and a subdued color palette, except perhaps in the spring when azaleas are in full, magnificent bloom. Such floral understatement, even in secular garden design, has its roots in the Buddhist temple and the teahouse gardens they inspired, which were designed to encourage calm and contemplation. 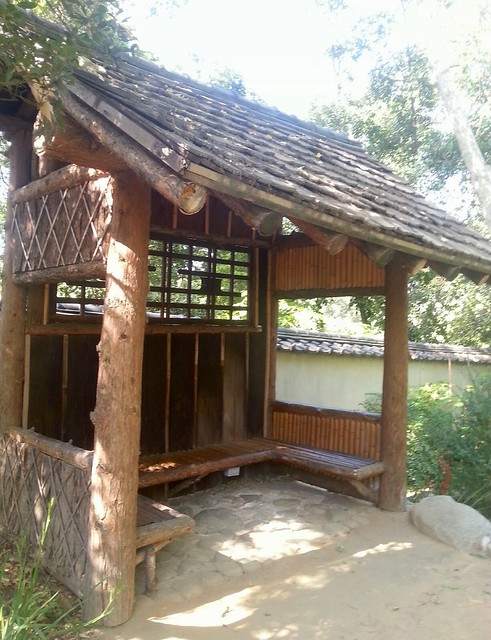 As they follow the winding path, visitors are led around the garden, looping clockwise around the garden’s two ponds, crossing bridges, up and over a gentle hill, and eventually reaching the elegant teahouse at the far end. The original designer of the garden, Kinzuchi Fujii (1875–1957), a Japanese-American landscape architect who created several gardens in Southern California, was well versed in the symbolism of traditional garden design, some of which was Buddhist in origin. The path is one of the most important elements, guiding visitors through the space, both geographically and spiritually. Following this particular path around the garden wall to the left, the visitor is presented with a broad view of the main pond, past a granite lantern visited by a golden koi fish, and large boulders, and across to a small waterfall. Here a small rustic structure called a koshikake machiai (literally a “waiting place for hanging the hips”) invites the visitor to sit for a moment and contemplate the view. This humble wooden waiting bench, which has its origins in the earlier teahouse gardens, was deliberately placed here to slow the visitor’s journey through the garden, allowing the mind to prepare for the experiences to follow—perhaps the pleasure of a tea ceremony in the teahouse. After a brief pause on the waiting bench, visitors continue along the path as it winds its way up and around the back of a small hill and then out and down to a point where the garden’s large and small ponds meet. Here the visitor can elect to cross between the ponds using a series of stepping stones or a zigzagging bridge. Like the narrow path over the hill, both the stepping stones and the bridge require the visitor to pay attention to where he or she is walking to avoid falling down the hill or into the pond. Like the waiting bench, these details also originate in tea gardens and are strategically placed to invite mindfulness in the guest as they slow down and pay attention to each step. In addition, the garden designer employed a traditional technique known asmiegakure, or “hide-and-reveal,” in which fences, bamboo, and buildings are carefully positioned to conceal the full view until visitors arrive at the best viewpoint. By only experiencing a single view at a time, visitors cannot help but slow their pace and savor each moment of their journey through the garden—another exercise in mindfulness. In addition to the overall design, there are many details in the garden that are laden with Buddhist symbolism. One of the most common details of Japanese gardens are the stone lanterns that line pathways or decorate hillsides and ponds. These toro have long illuminated the pathways of Japanese Buddhist temple, symbolizing the wisdom of the teachings of the Buddha and their power to illuminate a spiritual path for followers. One particular type of stone lantern, the pedestalled lantern, or dai-doro, is constructed in five segments representing the five elements of Buddhist cosmology and expressing the concept that after death our physical bodies will return to their original, elemental form. The base, touching the ground, represents earth; the stand represents water; fire is represented by the section encasing the light; air and void are represented by the lantern’s roof and the jewel pointing to the sky.

In the ponds of most Japanese gardens are koi fish, which symbolize fertility and good fortune throughout East Asia, but in a Buddhist setting represent the ability the live without fear of drowning in the ocean of suffering. Lastly, the plants themselves are often laden with symbolism, and in a Japanese garden there is no plant more symbolic of Buddhist beliefs than the cherry blossom. For the Japanese people, this pale pink flower that blooms gloriously and then falls to the ground has long represented the transient nature of life, the fleeting quality of the material world. Every spring, in Japan and other parts of the world, these delicate flowers help make a stroll through a Japanese garden a walking meditation and an exquisite exercise in mindfulness.

The author is the creative director of the Storrier Stearns Japanese Garden in Pasadena, California, and curates regular art exhibitions in the garden’s En Gallery.

Origins of the Godai Myо̄о̄
Zen Master Merce
Hasui and Horticulture: The Contemplative Botanical Art of Lindy B. Pollak