A white rabbit that appeared out of the Dharma's magic hat? From albirabbit.com

When I’m asked about my favourite aspect of meditation practice and location-independence—a combination I like to call lily padding—I often surprise people with my answer: it is the Dharma’s metta magic tricks.

In the second article of this Lily Pad Sutra column, I explored how cultivating a beginner’s mind has helped me with the permanent impermanence, so to speak, of location-independence. However, keeping an open mind is only the first step. With time and practice, the Dharma has upped the stakes by challenging my known and unknown illusions, one metta magic trick at a time.

Perhaps readers will remember a 2013 film called Now You See Me in which a group of illusionists calling themselves “The Four Horsemen” band together, à la Robin Hood, to pull heists to reimburse victims of Hurricane Katrina?  If not, it’s a lot of fun to watch as, scene after scene, nothing is as it seems, just as narrator Morgan Freeman (who is often cast as God in films) promises from the very start:

Come in close, because the more you think you see, the easier it’ll be to fool you.

What follows are some of my favorite examples of how the Dharma has fooled me over the years.

During my second lily pad, I was a live-in gardening volunteer for a Quaker study centre for four months. One day, I spent the afternoon helping two delightful children pick edible flowers for a bouquet to surprise the grown-ups at the dinner table. Later, as we all sat down to eat, I found myself sitting next to their father who thanked me for entertaining them in the garden earlier.

Over the meal, it slipped out that he was heading the legal defense team of a child-abuse scandal that was dominating the headlines. My mind boggled that such a devoted father was defending someone that the media was portraying as an absolute monster.  I simply couldn’t reconcile my carefree afternoon with what he chose to do for a living. How could he even stand to breathe the same air as one of the world’s scariest sexual predators? For profit? For fame?

Remembering my commitment to the beginner’s mind, I waited for his children to leave the table before asking him more questions in an effort to understand this better. It turned into one of the most interesting conversations I’ve ever had. In a nutshell, he felt it was his calling to use his considerable legal expertise to make sure “monsters” got fair representation . . . not just for their own sake, but for everyone’s sake. His legal agenda was transparent, so wasn’t it better that he made sure to dot all the i’s and cross all the t’s rather than someone whose agenda perhaps wasn’t? I still think of him every time a new sex abuse scandal is exposed, and hope that justice will truly be “served.”

In the sixth article of this column, I described my time as an office manager on an oil pipeline project. In that role, it was common for the workers to call me from their worksite to order personal protective equipment, as needed. One afternoon, I got a very crackly call that sounded like a request for fire-retardant overalls for a new worker with a 53-inch waist. When I repeated the measurements that I thought I’d heard back to the foreman, he laughed and corrected me: “Not a 53-inch waist, a 53-inch chest. He’s a GIANT!”

Picturing John Coffey in Stephen King’s The Green Mile, or Roald Dahl’s The BFG, I got busy dialling our usual suppliers, but with no luck. It took two days of following possible leads (and a lot of equanimity) before I found a small family firm at the other end of the country that had three pairs of XXXXL overalls in stock. They had been gathering dust and the firm was only too happy to clear their shelves and courier them immediately.

The following day, the “giant” rang the office . . . in tears! “Thank you more than you’ll ever know.  I’ve never had work clothes that fit before. It usually takes two guys to stuff me into and peel me out of XXXL overalls.” Curious to know what it’s like to be that big (especially in a predominantly male workplace), I couldn’t resist asking whether he was often challenged to fights by the other guys. He laughed and confessed that if it came to that, he wouldn’t even know how to throw a punch. So far, just getting out of his seat to stand up had been enough to defuse any aggression in the pub. 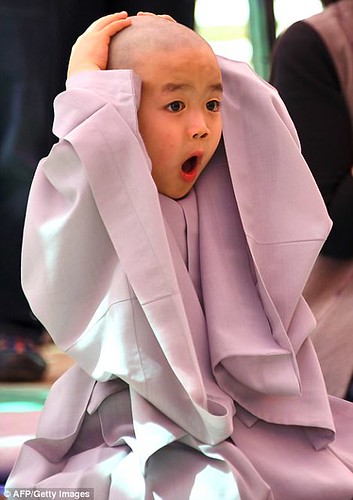 The Dharma also had some surpirses for this little monk.
From mailonline.com

A few months later, my lily padding found me housesitting for the son of a Hollywood music and film producer. His father came to stay for the Christmas holiday, so I took the opportunity to sit another 10-day Vipassana meditation course to give the family space for their reunion. On my return, we unexpectedly overlapped.  As the famous father got ready for a New Year’s Eve party, he invited me to share a drink. He sipped champagne and I sipped chamomile tea, secretly wondering what ace the Dharma had up its sleeve when it presented me with this most unexpected of conversations after 10 days of complete silence.

After some small talk, he asked me about the Vipassana course. I explained the concept and logistics of maintaining noble silence for 10 days, and he rolled his eyes in utter disbelief, “Why on earth would anyone subject themselves to that?” I laughed out loud, knowing full well that he’d made his fortune with Mafia financing and absolute control over every aspect of his life, and let the Dharma answer through me, “Well, in my experience, the ultimate control is no longer needing it.”

You could hear a pin drop in the silence that followed. Then the cogs began to turn in his mind and he cautiously asked me for a pamphlet. To this day, I have no idea whether he has ever attended a Vipassana course; however, it still tickles me to remember that the Dharma used his son’s dogsitter (a.k.a. me) of all people to plant the seed for that particular possibility.

Not every time the Dharma has fooled me was so serious. When I was housesitting on a small island in the Scottish Hebrides, a neighbor I’d only just met asked if I fancied a day trip to Glasgow. After two months in such a close-knit community, the offer of a day of urban anonymity and creature comforts was hugely tempting. We disembarked the ferry and, as we headed for the scenic drive along Loch Lomond, it dawned on me why I was riding shotgun: the driver was a widow dipping her first toe into Internet dating and was in need of a discreet chaperone! Alas, my day playing the Dharma’s cupid was short-lived. The digital romance wasn’t meant to be, but I made a lovely new acquaintance in the process.

A year later, another neighbor asked me to accompany her on an all-together different kind of trip.  This time, I would be chaperoning a visit to a nursing home. She felt it was her Christian duty to continue visiting her 104-year-old friend, but found the one-way conversations beyond depressing. On arrival, the neighbor introduced me and began her usual patter. I retreated to a corner so as not to overwhelm her friend and my eyes fell upon a framed telegram from the Queen of England. I had always believed Centenarian telegrams were an urban myth, and was thrilled to be proven wrong.

I then felt guided to generate metta, and what happened next surprised us all: the woman we were visiting began to answer questions and ask them in turn, even referring to topics from previous visits.  She then asked whether she could watch the Five (now Six) Nations Rugby Championship. On the way out, my astonished neighbor asked, “What did you do?  She normally never speaks.” I explained the basic premise of generating metta, and talked her through trying it herself in future.

My final example of the metta magic tricks the Dharma had in store for me is my favourite. During one of my sits, I discovered a fellow housesitter looking after a home a few doors down and made contact out of curiosity as it’s surprisingly rare to actually meet other housesitters. She had developed a serious chest infection overnight, but didn’t know how to access medical care in the town we were in. I offered to visit the doctor with her and, on our return to the house with the prescription medication she needed, we settled down for a comforting cup of tea.

We happily compared notes on some of our weirdest and most wonderful housesitting moments, when she suddenly began telling me about how she’d put herself through university as a Playboy Bunny! Out poured hours of the most extraordinary anecdotes of living in the Playboy Mansion in the early 1960s.

I simply listened in silent awe, realising I was witnessing the result of a sleepless night spent worrying over her health in a strange place and digesting Hugh Hefner’s death the day before. The woman before me was grieving both her own twenty-something self—a farm girl finding her way in the big city for the first time—and a boss who’d shown her enormous support and integrity at the time. None of the stories she shared reconciled with how the media were portraying him.

When she was ready for a nap, I offered my condolences and thanked her for “correcting” my own views of Playboy and of Hugh Hefner. She laughed heartily, and waved her hands, “Oh, all that was just for show. He was a businessman first and foremost, so he created that nonsense for mystique.  The real man respected women and welcomed African-American staff and customers during segregation.”

Tell me where I’m wrong.

My years of lily padding have evolved my own slant on Martha’s magic invitation. Now, whenever I feel a judgment arise within, or an illusion in need of dis-illusion, I silently say: