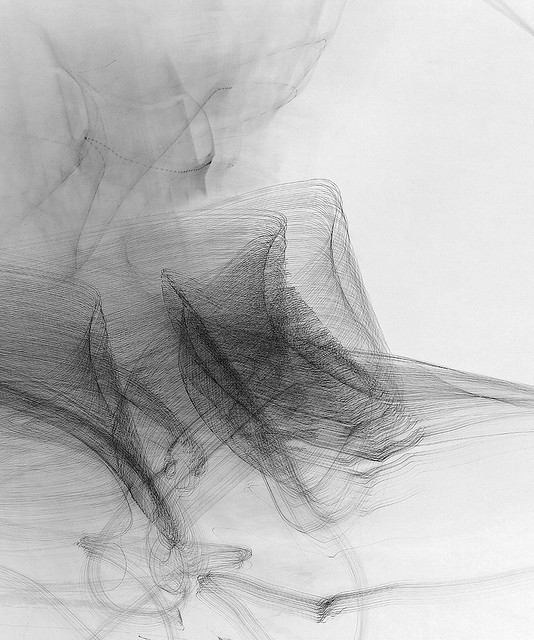 Untitled by Echo Lew, 2013. Photograph of moving light printed in ink on fine art paper.
Image courtesy of the artist

In 2006, Taiwanese-American artist Echo Lew (b.1951) was visiting Shanghai from his home near Los Angeles. One night, he found himself standing on a street corner gazing, transfixed, at the patterns formed by the headlights of the cars speeding past him. Lew had been painting for many years and he had recently begun studying photography. Around the same time, he had also begun practicing Zen Buddhist meditation and had noticed that when sitting for a long period he would start to see light patterns dancing before his eyes. Lew started wondering how he could combine his photography with his meditation practice. Watching the car lights in Shanghai etch ephemeral patterns in the air gave him the idea to create light drawings that expressed the light he saw during his meditation practice. For the past decade, Lew has been creating imagery that he describes as a combination of photography and meditation. Using a highly technical artistic process, he has created a series of energetic monochromatic works that have the spontaneity, simplicity, and the spirit of Zen Buddhist calligraphy. Flying with Me by Echo Lew, 2012. Photograph of moving light printed in ink on fine art paper. Image courtesy of the artist

Lew is not the first artist to create light drawings or paintings. The technique of “light painting” originated in 1914 when scientists Frank and Lillian Gilbreth used small lights and an open shutter to track the motions of factory workers. In 1949, Pablo Picasso learned the technique from Gjon Mili, a LIFE magazine photographer and lighting innovator who attached small lights to the skates of ice skaters and photographed them in motion. The Spanish artist experimented in a darkened room using a small electric “light pen” to create a total of 30 “light drawings” of centaurs, bulls, flower vases, Greek profiles, and even his own signature. Picasso’s light drawings were made in the air, but Mili captured them in photographs taken on a long exposure. Since then, numerous other artists have explored light drawing, or light painting, and in recent years, with innovations in photographic technology and the availability of portable LED lights, applications of the technique have become artistically and culturally diverse.

Lew infuses this playful, yet highly technical art form with a deeper philosophical dimension. Lew’s light drawings begin with meditation. First, the artist sits in silence and stills his mind. “In my Zen Buddhist meditation practice,” Lew explains, “the lights bend like a reed in the breeze or soar freely as a bird above a cliff, thousands of lights dancing in my mind.” After meditating, he creates a simple drawing, a sketch based on the images that appeared to him during meditation. Then for one minute in a darkened room, he guides a wire frame onto which he has attached small LED lights through the air by hand, using a long exposure to photograph the lines of light as they swirl, loop, and dance through the dark space. For some works he attaches lights to a bodysuit and moves his entire body to music. Bridge by Echo Lew, 2011. Photograph of moving light printed in ink on fine art paper. Image courtesy of the artist

Some of Lew’s images are printed white on blac, while others include watercolor and acrylic accents. However, most of his final images are black on white—a negative of what his camera captures. On white fine art paper, he prints the hundreds of thread-like lines produced by the light in black, creating delicate but vibrant monochrome patterns that evoke approaching storm clouds, a swarm of bees, or a silk gauze scarf caught in the wind. The varying density, tone, and forms created by the light-guided ink markings are reminiscent of Zen Buddhist painting and calligraphy. In Flying with Me (2012), gossamer threads swirl and twist and curve through space, as if floating softly on a summer breeze, echoing the light-handed but expressive brushwork of Chinese artist Muqi Fachang (c.1210–69), a great master of Chan (Zen) Buddhist painting in the Southern Song dynasty (1127–1279). Wind (2012), however, possesses a bolder, more rugged energy, the jagged lines and angles echoing the intense brushwork of Japanese Zen calligraphers such as Torei Enji (1721–92), whose bold single characters transmitted powerful spiritual messages to Zen practitioners. Lew delights at the range of styles available to him in this hi-tech art form. “Digital photography allows me to expand creatively while using an ultra-contemporary medium with limitless potential.” Wind by Echo Lew, 2012. Photography of moving light printed in ink on fine art paper. Image courtesy of the artist

The lines in Lew’s light drawings also reflect the artist’s life crisscrossing the globe, exploring the world and his place within it. He grew up in Taiwan, where he studied maritime navigation, worked briefly in the Taiwanese merchant marine, and then as a pen designer. In 1983, he moved to Kansas, where he and his wife ran a Chinese restaurant for 10 years before relocating to the Los Angeles area in 1993. There, he began pursuing his true passion for art, starting out as an oil painter, primarily exploring abstract expressionist imagery and eventually discovering photography, Zen meditation, and light drawing. “My work is hard to label,” he admits. “It could be considered photography, drawing, calligraphy, or print.” Whatever we choose to call his artistic creations, Lew has discovered a profound form of play that reflects a lifetime of motion, exploration, and innovation. His light drawing has enabled him to express visually his deepest experiences during his Zen meditation and in his broader life experience. For Lew, “The inner world is clean, clear, and full of fresh air. Thousands of lights move as a wave. The secrets of the universe are revealed.” Wave by Echo Lew, 2016. Photography of moving light printed in ink, with watercolor on fine art paper. Image courtesy of the artist