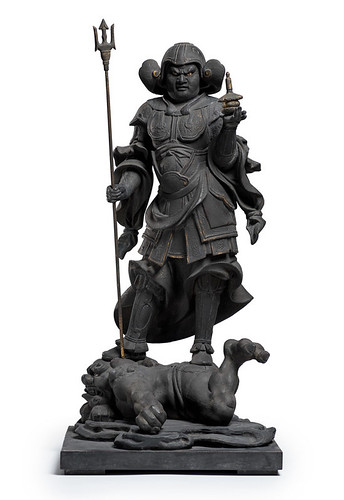 Bishamonten. Wood, crystal, and traces of polychromy
and gilding. Japan, c. 1250. From collections.lacma.org

The deva (Jpn: ten), or celestial beings grouping of deities—essential to the security of the Buddhist cosmos—rank below the buddhas (Jpn: butsu), bodhisattvas (Jpn: bosatsu), and vidyaraja (Jpn: myо̄о̄). This is largely because the latter three are Buddhist by origin, whereas the celestial beings were once Hindu deities who were enticed to Buddhism to fulfill protector and enforcer roles.

Among the celestial beings are a particularly powerful group of four known as the lokapala (Jpn: shitennо̄), Four Celestial Kings who each protect one of the four continents that sit at the base of Meru, the sacred mountain at the center of the Buddhist cosmos.

In the absence of Taishakuten, however, it is Tamonten who is recognized as the most powerful and therefore chief of the Four. He, like the others, is depicted in Chinese-style armor (Jpn: yoroi) and has a fearsome face. He holds in one hand a weapon of war, such as a halberd (Jpn: hoko), baton (Jpn: hо̄bо̄), or three-pronged spear (Jpn: sansageki), and in the other a stupa or treasure pagoda (Jpn: hо̄tо̄). Standing in defiance against evil, he crushes beneath his feet one or two demons (Jpn: jyaki). On occasion, these demons were converted from their malevolent nature to serve the Buddha and his attendants; two such examples are the lamp-bearers Tentoki (Celestial Lantern) and Ryutoki (Dragon Lantern).

Tamonten specifically was attributed a substantial amount of power as his role was to protect Meru from threats originating from the north, from which arose the greatest and most imminent evils against Buddhism. These were likely inspired by the Mongol hordes, whose constant threat prompted the construction of the Great Wall. Not only that, but Chinese geomancy, or feng shui, to which Tang and Heian aristocracy paid great attention, prescribed that buildings face south, away from the danger. Indeed, so great were the fears of the northern direction that Vaisravana himself carries a relic from the Buddha’s body to stave off evil influence. 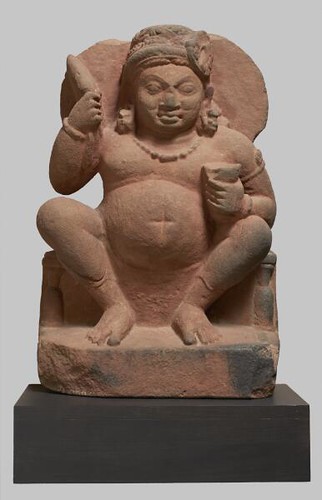 Of all his accoutrements, perhaps the most identifying is the treasure pagoda. Inside the pagoda is stored immeasurable wealth, an association rooted in Tamonten’s origin as Kubera, the Hindu god of wealth. Kubera was counted among the greatest of the yaksas—a class of powerful nature spirits—and was thus considered a ruler of both them and other violent spirits known as raksas (Jpn: rasetsu). Also known by the epithet Vaisravana or “son of Vaisrava,” Kubera was often depicted as a portly, dwarf-like figure holding a pomegranate or money sack, and was sometimes accompanied by a mongoose, the natural enemy of the snake which in turn represented greed.

The worship of Tamonten, along with the other three guardian kings, was introduced in Japan as early as the Asuka period (538–710) but was popularized during the Heian period (794–1185). Tamonten was adapted from his initial Indian esoteric form to become a manifestation of the Japanese Shinto warrior god Hachiman in an iconographic system called honji suijaku, where an originally Buddhist deity is associated with and transformed into a uniquely Japanese form. His popularity outgrew that of his counterparts and Tamonten—his name when he served with the other shitennо̄—came to be worshipped independently as Bishamonten. This is not to say, however, that Bishamonten had not been worshipped independently elsewhere in East Asia.

As Bishamonten, the deity largely retains the standard Tamonten iconography; an identifying difference, as scholar of Buddhist iconography Mark Schumacher notes, is which hand holds the hо̄tо̄. If the left hand holds it, the deity is Bishamonten; if the right, then it is Tamonten. Another way to distinguish the two is by observing his attendants: Bishamonten often appears alone, but is sometimes accompanied by Kichijо̄ten (Skt: Mahadevi) and Zennishi in a grouping called the Bishamonten triad (Jpn: Bishamonten sanzon). The most common explanation is that Bishamonten and Kichijо̄ten are husband and wife, and Zennishi is their son. 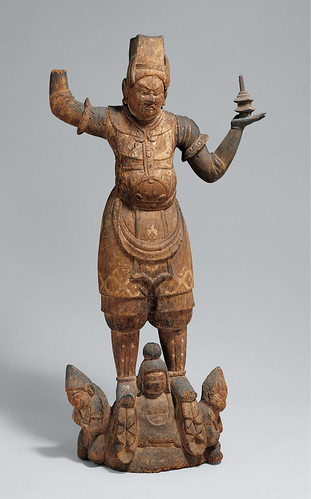 The Japanese tendency to call the same deity by two different names, and to elevate Bishamonten as an individual deity above the other shitennо̄, likely originates with Chinese stories about Toupa Pishamen. In the mid-eighth century, an attack on a major administrative city in China by the Tibetan empire caused the Chinese emperor to ask Amoghavajra, an Indian monk of the esoteric Buddhist tradition, to beseech Vaisravana for assistance. The deity responded in favor of the Chinese defenders and thereon garnered a reputation as a protector against foreign invasion. He is known in Japan as Tobatsu Bishamonten, and is distinguished from other representations of Bishamonten by wearing a more form-fitting style of Chinese armor. Rather than standing on the backs of vanquished demons, Tobatsu Bishamonten is held up by the goddess Jiten (Skt: Prithvi), herself a dispenser of earthly treasures, flanked by two demons commonly identified as Niranba and Biranba.

Aside from his inclusion as the chief of the shitennо̄ (as Tamonten) and as an independent deity with a possible triad grouping, Bishamonten appears throughout Japanese culture in numerous other auspicious forms. He is counted among the Seven Gods of Fortune (Jpn: shichifukujin), among the 28 generals (Jpn: nijūhachibushu) of the thousand-armed Avalokitesvara (Jpn: Senju Kannon), and among the 12 celestial guardians (Jpn: jūniten).