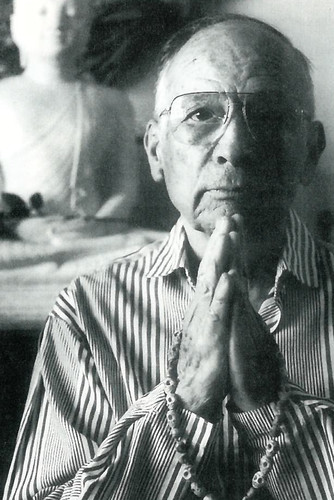 Julius Goldwater at his home in Los Angeles, 1992.
From tricycle.org

Raised in a prosperous Jewish home to German-American immigrants, Julius Goldwater would become one of the earliest Americans to embrace Buddhism and one of the first to be ordained as a Japanese Shin Buddhist priest.

An immediate cousin of Republican senator Barry Goldwater, Julius was born in Los Angeles on 13 May 1908. Although both his parents worked hard to raise him as an observant Jew, even placing him in a two-year Jewish Sunday School program, Goldwater later said “it didn't take.” When his father relocated the family to Hawaii in the 1920s, Goldwater encountered Buddhism, finding it’s philosophy of life fascinating and appealing. There, he met and was profoundly impressed by the teachings of Rev. Ernest Hunt, an Englishman who had become a Buddhist minister, of Yeimyo Imamura, a Japanese bishop, and of Tai Xu, a Chinese monk.

He took formal vows in Honolulu in 1928, during a ceremony at a Buddhist temple, and became one of America’s first Jewish Buddhists. He returned to Los Angeles where he joined a Buddhist Temple in the Little Tokyo section of the city. There he led a Buddhist study group and started promoting the Buddhist teachings. Priests at the temple encouraged Goldwater to seek full Buddhist ordination in Japan. They felt that the presence of an American who embraced Japanese Buddhism would be a helpful role model for younger Japanese-Americans who were embracing all things American while abandoning their own Buddhist heritage.

With their encouragement, Goldwater traveled to Japan in the early 1930s and was ordained as a Shin Buddhist priest. Additionally, he went to China where he was ordained a second time in another Buddhist lineage. In China he spent considerable time living in a monastery where he took the name “Subhadra.”

Returning to the Los Angeles temple, he was now Rev. Julius Goldwater, a title used by Shin Buddhists, and the first American leader in a Japanese Buddhist temple. He led English-language services, taught meditation, organized youth groups, and traveled up and down the West Coast giving Dharma talks to Japanese-Americans working in agricultural settlements.

Goldwater’s life took a dramatic turn on 7 December 1941, when Pearl Harbor was bombed by the Japanese military. In early February 1942, President Franklin Roosevelt signed Executive Order 9066 authorizing the removal and incarceration of more than 100,000 Japanese-Americans from the West Coast into well-guarded government camps.

From one day to the next, Goldwater’s Little Tokyo temple had no members. As the only priest in the district who wasn’t Japanese, he assumed responsibility for all the temples in southern California. He transformed his own temple in Little Tokyo into a warehouse storing furniture and other possessions left behind by the forced evacuees.

During the years of their incarceration, Goldwater used his own money to travel to camps in Arizona, Arkansas, California, Colorado, and Wyoming. He brought gifts for the Japanese-Americans, as well as Buddhist study materials, and current news. In California, he watched over the internees’ homes, and in one case, he prevented the illegal sale of a home by alerting the police.

While doing his work on their behalf and while functioning as a Japanese Buddhist priest, Goldwater often found himself dealing with government authorities who were suspicious of all things they saw as Japanese. He tried to help them understand that Buddhism was an autonomous philosophy that had no connection with the Japanese government.

When the war ended and Japanese-Americans were permitted to returned to California, Goldwater turned some of the temples into hostels that could temporarily house the returned families. He also assisted them in finding employment and gaining driver’s licenses. When families needed transportation, he often loaned them his own car, and when anti-Japanese grocers wouldn’t sell them food, Goldwater would go out and buy it for them. He was often ridiculed as a “Jap lover” by other Americans and had his house defaced and vandalized.

Goldwater resisted all attempts to portray him as heroic saying, “I only behaved as any American would have done.” In 1991, one Japanese American woman sent him a US$500 check out of the reparation payment she received from the US government. Goldwater wrote back, replying, “As long as I live, I won’t cash it, but I accept it in the spirit it was written.” (Los Angeles Times)

Julius Goldwater died in his 93rd year on 11 June 2001. At the time of his death he was believed to be the oldest living Buddhist convert in the West.

Words of wisdom from Julius Goldwater

What the Buddha discovered was a method of emancipation through enlightenment, namely, by a complete understanding of and living in harmony with the laws that govern life.

We surround all men and all forms of life with infinite love and compassion. Particularly do we send out compassionate thoughts to those in suffering and sorrow; to all those in doubt and ignorance, to all who are striving to attain Truth and to those whose feet are standing close to the great change men call death, we send forth oceans of wisdom, mercy and love.

Buddhism is not religion, it’s education.

The present is the child of the past and the parent of the future, which is only another way of saying that we are always the result of our thoughts, words, and actions in the past.

Emancipation in Buddhism means freedom from ignorance, the attainment of a state of enlightenment which each must work out for himself. No one can be saved by another.

The altruistic ideal contained in the Buddha’s message has never been excelled: to do right, not for fear of punishment or hope of reward, but simply because it is right.

Buddha’s message is essentially democratic, for he proclaimed two thousand five hundred years ago that all men are born free and equal and that deeds alone determine high birth or low birth.

Living in a world dominated by a quest for comfort, one finds it difficult to see clearly what path he is to follow in order that his ideals may not be confused or displaced by others.

Buddhists use such symbols as incense to imagine the burning away of our own pettiness, our self, so that we, too, no longer exists as self, but as whole.

The Buddha’s teaching does not tell anyone to close their eyes in certain directions, but on the contrary invites all to open their eyes in all directions and to keep open and to accept nothing that has not been fully tried and tested.