The 20th century opened in China with a series of unprecedented challenges faced by both the ruling and the ruled. The 2,000-year-old dynastic political system was on the verge of collapse. The 1911 Revolution that overthrew the Qing dynasty was followed by attempts to found a republican state. Amid foreign threats, war, and a deep sense of moral decay, Chinese intellectuals and reformers sought to define a Chinese nation through vastly diverse, and often conflicting, ideas of culture, history, and race. The themes of reform, progress, and renewal hence permeated the works of intellectuals of the day. (Zarrow 2005)

Often conceptualized under the rhetoric of modernization, nation-building efforts and experiments that marked the first half of the 20th century led to the politicization of almost every aspect of society, including religion, which was often considered a hindrance to China’s march toward modernity. The challenge for religion in this conjuncture was twofold. On the one hand, with imperial patronage gone with the demise of the last dynasty, Buddhist and Daoist institutions had to find new ways for their survival. On the other hand, faced with the increasingly hostile religious policies of the republican government, religious leaders had to redefine their place in society vis-à-vis the secular nation-state. (Nedostup 2009 and Goossaert 2011)

Central to the national renewal project was educational modernization, seen by many as the cure for China’s myriad problems. Under the slogan “saving the nation through education” (jiaoyu jiuguo 教育救國), there was a shared conviction that a modern education, combining the morality of a national culture and the practical knowledge of Western science and technology, would transform imperial subjects into selfless, dedicated citizens. Paradoxically, this educational modernity would be accomplished at the expense of religion—in a series of “build schools with temple property” (miaochan xingxue 廟產興學) campaigns. Under dire fiscal circumstances, government officials proposed to expropriate temples with rich endowments as an immediate solution for funding a new national educational system. 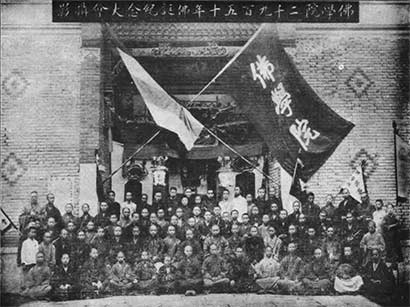 Celebrating the birth of the Buddha at the Wuchang Buddhist
Academy, 1923. From fo.ifeng.com

The first wave of Buddhist schools founded in the last years of the Qing can be seen partially as the Buddhist effort to prevent confiscation. Buddhist elites and reformers soon realized that a modernized Buddhist education would revitalize their religion and ensure its survival under the tumultuous socio-political climate, encapsulated in the slogan “revitalizing Buddhism through education” (jiaoyu xingjiao 教育興教). In this context, the Jetavana Hermitage founded by layman Yang Wenhui in 1908 provided the prototype for modern Buddhist academies. With a curriculum dedicated exclusively to the scholastic study of Buddhist history, texts, and doctrine, the Jetavana Hermitage also produced for Chinese Buddhism some of the most prominent Buddhist thinkers in modern times, including Taixu and Ouyang Jingwu.

After the first modern Buddhist school that adopted the name foxueyuan (佛學院) was founded by Taixu in Wuchang in 1922, such institutions of learning quickly became prevalent in the Chinese Buddhist landscape. With a comprehensive curriculum that included both Buddhist and secular subjects, and a modern pedagogy that utilized textbooks, blackboards, and examinations, Wuchang and other foxueyuan represented a new way to imagine learning in Chinese Buddhism. Despite their humble scale and short lives, these modern Buddhist schools produced a community of student-monks who advocated a more engaged role for Buddhism in every aspect of life in the new republic. In their vision, once rid of superstition and other undesirable elements, Buddhism as a rational, moral, and global religion would be essential to the project of strengthening the Chinese nation. The activism by these student-monks was aimed at structurally connecting Buddhism to the nation-state, culminating in the slogan “saving the nation with Buddhism” (Fojiao jiuguo 佛教救國). This is how the narrative ended where it began—in the collective pursuit of national rejuvenation. But this time the Buddhists, armed with the legal, nationalist, and secularist rhetoric first imposed by the state, were negotiating with and resisting secularization by demanding a space in the public sphere.

A century later, this historical background to the Buddhist modernization project is still relevant to our attempt to understand ongoing developments in mainland Chinese Buddhism. Is Buddhism being co-opted or “used” by the CCP regime, especially in the ambitious Belt and Road Initiative? Does the Buddhist leadership genuinely share the vision of the Chinese Dream? While one can rightly question the autonomy of the Buddhist establishment, one cannot dismiss the centrality of the nation in imagining the “modern” in modern Chinese Buddhism. Whether Buddhism can play a leading role in a democratic civil society, as in the case of Taiwan, however, remains to be seen.

Ven. Rongdao Lai is Assistant Professor in the School of Religion at the University of Southern California, and a 2016 Research Fellow of The Robert H. N. Ho Family Foundation Program in Buddhist Studies.

This article is part of Buddhism in the People’s Republic, a special project focusing on the schools of Mahayana Buddhism in contemporary China. Through this project, Buddhistdoor Global’s editorial team and expert contributors aim to provide a concise, insightful, and informative overview of the history of contemporary Chinese Buddhism, and the modern practices and influences that are shaping the changing face of modern China.