The prominent American author and feminist revolutionary Gloria Steinem (b. 1934) has said that visiting India after graduating from Smith College in Massachusetts in 1956 was a “before and after” experience in the trajectory of her life. Steinem, who spent two years studying and learning in the Gandhian tradition, divides her life into two key chapters: the life she led before she moved to India, and the life she continues to lead since her return. A few decades earlier, another Western woman left her home for that vast subcontinent, also to become involved in social and political revolution. Unlike Steinem however, this woman never returned, instead making her home in India and contributing to a culture that was to change forever. Freda Bedi (1911–77), an Englishwoman who became an ordained bhikkhuni later in her life was, as the new book The Revolutionary Life of Freda Bedi reveals, a “revolutionary,” for her tireless work in appeasing the suffering of so many. Freda’s life and work have remained largely obscured from history, probably because she carried out social service in its true spirit—performing acts of heroism at great personal sacrifice and without self-promotion. She was a Buddhist nun of the highest caliber, living the precepts of Buddhism in every aspect of her life, which also led her to shun publicity. Her years spent through India’s independence struggle, and as a post-independence nation-state, were also a time of great turmoil for the influx of refugees from Tibet—lay Buddhists and monastics alike, who were unschooled in the ways of presenting themselves to the larger world. Freda became a vital bridge in helping the incipient Tibetan Buddhist monastic orders in India to establish credibility in the eyes of the world. In Freda’s work, her personality was subsumed within the many sacrifices she endured, hence her name is not as widely known today as it might be.

The Revolutionary Life of Freda Bedi: British Feminist, Indian Nationalist, and Buddhist Nun by the eminent journalist Vicki MacKenzie, and published by Shambhala Publications, is a major step toward addressing this oversight. Expertly crafted and meticulously researched, this in-depth biography brings to the fore the many brilliant narratives in the life of Freda, known to many Tibetans simply as “Mummy-la.”

Buddhistdoor Global: Why did you choose to include the word “revolutionary” in the title of the book?

Vicki MacKenzie: Freda Bedi was a revolutionary in so many aspects of her life; she was a revolutionary woman, first of all, because she had the courage to marry a brown-skinned man [Baba Pyare Lal Bedi (1909–93)] while at Oxford University. It broke all the barriers of class and color that were very extant at that time, and the scandal went all the way to Parliament. She was the first white female student who chose to marry a brown-skinned man and this was regarded as completely taboo. So she was revolutionary in that sense because she was already crashing through glass ceilings. That took enormous courage.

Then she was a revolutionary in the fact that she went to live in India and joined Gandhi—Gandhi’s independence movement—which meant she was defying the country of her birth, Britain, which ruled India. Freda was rousing the Indian people through her oratory to join Gandhi and to clamor for independence; it was incredibly brave.

She was a daughter of the British Raj saying, “We can’t have this imperialism.” And she went to prison for it, which she was prepared to do. She was handpicked by Gandhi to be one of his satyagrahis, people who were prepared to sacrifice everything, including their lives, in order to bring about a peaceful revolution against imperialism. So she was revolutionary in that sphere too. Freda was also revolutionary in that she was a professor and a teacher and was very keen on educating women and girls. She was a feminist long before the term was invented. She wanted to raise the status of the education of women, and so she wrote magazine articles and was very keen on promoting this.

The next time she was really revolutionary was during Partition of India. Freda was running covert messages in Kashmir to a man called Sheikh Abdullah, because neither she, nor her husband, nor Gandhi wanted the Partition of India to happen. Sheik Abdullah, who was known as the Lion of Kashmir, had been banned from going to Kashmir, so she was taking messages to his followers, disguised in a burqa. She was incredibly brave, and during the Partition, she worked tirelessly to help the refugees during the terrible destruction, the bloody destruction and mayhem the Partition caused.

Since childhood, Freda was motivated by altruism. All of this political activism and all of her political activities were because she wanted a fairer, more just world and she couldn't stand suffering. She was a spiritual seeker since childhood, and she was looking sincerely into every type of path, trying to find the right one for her.

Later, Freda went to Burma on a UN Mission. She was very senior—she was a social worker in charge of looking after the welfare of Indians, especially in the countryside, so she traveled widely and completely identified herself with being Indian. In Burma she found herself in a Buddhist country for the first time. It was there that she felt at home and so she studied meditation with the Burmese meditation masters. She had an enlightenment experience there and came back to India, never the same.

The next revolutionary thing she did was to help the Tibetan refugees and the Dalai Lama when they first came to India. Jawaharlal Nehru, the first prime minister of India, sent her to do this, as she was a friend of Indira Gandhi and Nehru. When Freda was sent by Nehru to look after the Tibetans, who were in terrible disarray and very traumatized in their refugee camps, that’s where she felt she belonged now, with the Tibetans.

And of course she was revolutionary for being the first fully ordained Western Tibetan Buddhist nun, breaking through that glass ceiling and setting the path for other nuns, giving them the confidence to do the same.

BDG: Can you say something about your research? It must have been a massive undertaking.

VM: It took a long time to collect all the materials. I did loads of interviews. I had to travel far and wide to interview people who had known Freda, and wade through mountains of material from Freda Bedi herself, her letters, her diaries, her recordings, all the rest of it. That took a long time—almost 10 years. I wanted to do her justice; I wanted to capture all the aspects of Freda—the woman, the mother, the political activist, the social worker, the writer, as well as her spiritual side.

BDG: Was there anything in your research that really surprised you—that you didn’t think you would find?

VM: What I found most surprising was how advanced she was spiritually. Freda wasn’t just a nun. Even though she hadn’t been a nun a long time, she was already very advanced. That’s what really surprised me. She was authorized to give very high teachings. She was ordained by the 16th Karmapa, which was unheard of at that time.

BDG: It’s interesting, then, that the 17th Karmapa is also re-instating bhikkhuni ordination.

VM: Absolutely, because the previous Karmapa was the one who pushed Freda to do it. It’s wonderful. 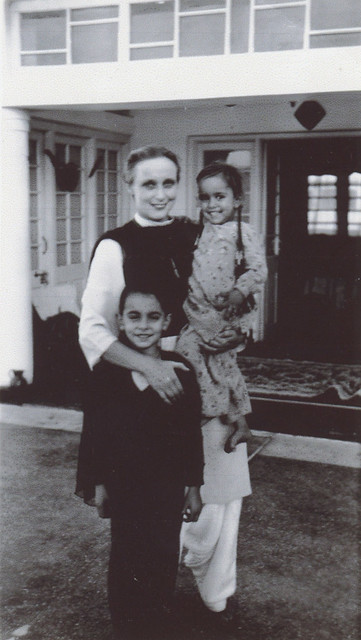 The first appearance of Freda’s daughter Gulhima
“Rose of the Snows,” born in Kashmir on 15 September
1949, pictured with her brother Kabir in front of their more
conventional home. Bedi family archives

BDG: What can Buddhists learn from Freda’s incredible life?

VM: Freda was utterly true to her beliefs, and never wasted a moment. What really knocked me out about Freda Bedi was how much she achieved. She only lived until she was 66, but achieved so much through sheer application and hard work. She never stopped: the refugees she helped and the charitable projects she set up, which are still going today.

She wrote countless letters to encourage people to help; she never stopped getting people to help people. I wanted to call the book Mummy-la because everybody called her “Mummy;” she was like the universal mother. Her heart was very good.

BDG: What was the most difficult aspect of writing this book?

VM: My hardest job was to know which angle to take—should I focus on her political activism, the amazing work she did there, or on the feminist aspect, what she did for women, and the conflict between her role as a mother and her other roles? In the end I decided that the only way was to focus on the pull of her spiritual nature, which was the driving force behind everything else. It took me a long time to understand that was the only true, legitimate way to pull this book together and all its many different threads.

The Buddhist Stance on Theravada Women’s Issues: A Conversation on Gender Equality and Ethics with Ajahn Brahmali
Exclusive Interview: The 17th Karmapa and the Buddhist Nuns of the Tibetan tradition
Freda Bedi: The Making of a Buddhist Nun
Life in the Red – The Long Journey to Really Being Daughters of the Buddha