Look for the Buddha within (click to enlarge). From pinimg.com

Do you recall magic-eye books? Those bound pages of autostereograms—2D computer-generated patterns containing 3D images (stereograms). Similar images can also be found online and seem to work just as well as those printed on paper. At first, all you can see is a mass of color, like a Where’s Waldo-Kandinsky hybrid, or one of Piranesi’s prisons—if it was organic and in the middle of a jungle with the occasional sinkhole thrown in for good measure—or like psychedelic computer code.

At first, most of us will stare at the image. At this point, we may experience a phenomenon called pareidolia—seeing familiar or meaningful shapes in abstract information—as  the glorious, ever-hungry, pattern-seeking part of our brain adores trying to make sense of our random world. I love playing with this, whether I see grotesque faces in wallpaper, aliens in tree bark, or if I am creating anatomically correct figures out of the random spread of dye in my silks. It’s a game I have played and used in my work as an artist. But I digress (although I do recommend trying it out—it’s fun).

This is as far as most folks will go, yet they may well be content as the effects of pareidolia have satisfied sufficiently the brain’s urge for gratification by assuming it’s seen all there is to see. For others, they are transported into an entirely new world. They don’t simply see the 3D image hidden within the 2D pattern; they enter into something altogether different, where their placid eyes can look around and immerse themselves in whole a new landscape. 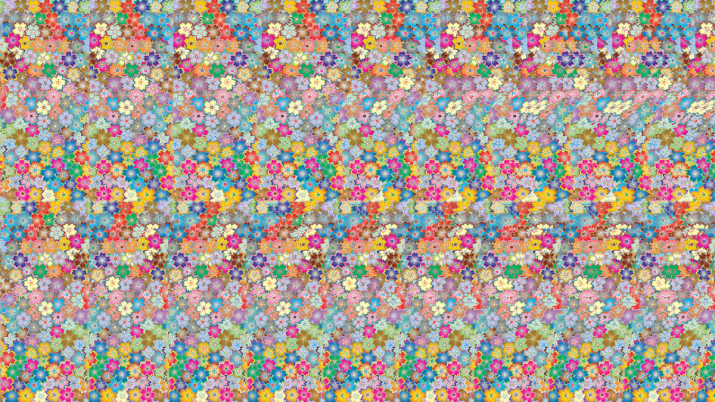 And once you see this new three-dimensional “reality,” you can’t unsee it. Images seen going through the “pareidolia stage” weren’t anything at all— well, aside from a distraction.  The trick is to go slightly crosseyed first. This act seems to relax the eyes enough to see things in a new way. Contrarily, the more we stare and strain at the 2D image, the less likely we are to ever enter this altered state of perception.

I have long proposed that these autostereograms are a rather splendid metaphor. Once we’ve witnessed a new reality, there isn’t any going back. But we need to be in the right state to see it. I’m not suggesting that we need to be habitually cross-eyed, as that may also result in walking into walls, which hurts. But we would far better off by remaining placid. Relaxed.

Judging by recent news, it appears that we as a society are stepping into a new post-disclosure world. Governments have officially, finally, admitted that there are objects flying in our skies that defy known logic. There are also an increasing number of assertions that we are far from alone in the universe. Oh, and that, as a species, we really aren’t all that smart after all. For many, this last part may not come as a shocking revelation, especially as we continue to behave in ways that are in absolute opposition to inner growth.

The implications of these revelations may well render many ancient cave paintings, creational stories, and fantastical myths as far more plausible historical facts. But what will be the repercussions? Much of modern social psychology has assumed that humans have a unique place in the universe and an intimate relationship with a supreme being. Along with out-and-out capitalism and a science-based dose of nihilism, of course. Time will tell just how much we humans will evolve with this new information. This also brings me to the topic of OBEs, out-of-body experiences. Those who have adventures with this phenomenon are adamant that they are not dreams or strained vivid imaginations. They may even claim to return with “evidence” of their travels. Hallucination-free witnessing of the pulsating, hyper-vivid, interconnected intelligence of this planet’s flora catapults one into a new relationship with nature. No longer is it “out there,” separate, and at our disposal. Seeing or communicating with entities beyond the veil becomes as pragmatic as your cat trying to tell you it’s hungry. They are not subtle.

To slip through the surface frequencies of this reality and perceive beyond our illusions: we spend most of our lives straining and staring at a 2D interpretation of reality, expecting to be transported into a new 3D landscape. It doesn’t work that way. Sure, we need an image first and then to focus with intention, but we also need to relax.

The Wisdom of Uncertainty
On the Instability of So-called Reality
Dance in the Reality You Have
Art, Magic, and Hidden Realms