Title page of an 1811 edition of Dogen's Shobogenzo. From flatbedsutra.com

In this article, I would like to reflect on how to read Japanese Buddhist texts. To explain my strategies for approaching texts distant in time, culture, and language, I will focus on the Shobogenzo (Chi. Zengfayanzang, Eng. Treasury of the True Dharma Eye) written by the medieval Zen master Dōgen (1200–53). The reason for this choice is that among all the Japanese Buddhist authors, Dogen’s work has been the most widely translated and circulated in English (and even Chinese). While I am focusing specifically on the writings of Dogen, I believe the same strategies can be applied to any text, especially those written long ago in a different language.

In an earlier scholarly essay (Kopf 2014, 138–164), I suggest four steps to guide our encounter with Dogen’s Shobogenzo today in an English translation, or any other translation—even translations into contemporary Japanese. These steps are as follows: 1) awareness of one’s own standpoint; 2) identification of what we mean when we use the words “Dogen” and “Shobogenzo”; 3) meeting with Dogen “on his own turf” (Kasulis 1985, 87); and 4), forthrightness about the role a particular interpretation plays in today’s world. In this essay, I will explore these steps in some detail: 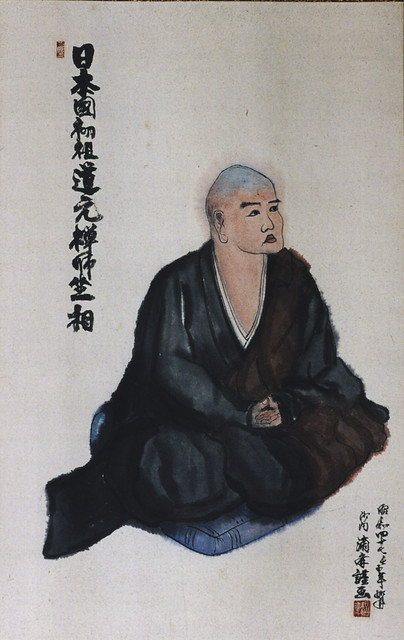 1) When we approach a text we bring with us, despite our best intentions, our own experiences, understanding of the world, and specific interests. There is nothing wrong with that; we all do it (with the exception of the truly awakened). However, we should endeavor to be conscious of our standpoint and perspective since it colors the way we read a text. Estonian scholar and author Rein Raud identifies four different attitudes towards Dogen’s writings common in English-language literature on the subject:

A philologist would want to compare all the variable versions of the text in order to determine which of these is the correct one. . . . A historian . . . traces the influences, the threads of thought, developments, as well as reactions and rebuttals to other authors. . . . A religious reader is . . . bothered . . . by the relevance it has for the reader’s own experience of the world. . . . for the philosophical reader . . . [w]hat matters is interpretations, their quality, their productivity for further thought. (Raud 2013, 27–28).

None of these approaches is necessarily better or worse than the others, however—and this is important—a historian has a different interest in reading Dogen than a practitioner. If we are to be fair to the text we read, we have to be aware of our own preferences and even prejudices. The Dharma hall at Eihei-ji, a temple founded by Dogen and one of the two headquarter temples of Soto Zen. Image courtesy of the author

2) Being aware of our background and expectations, we are now ready to approach Dogen’s text. However, this is not as easy as going to a bookstore or a library and pulling out a copy of the Shobogenzo. As William Bodiford explains (Bodiford 2012), there are four versions of varying length and content, and multiple manuscripts of what we call “Shobogenzo.”

I would like to illustrate this dilemma with an anecdote from my own experience. Many teachers and textbooks suggest that, after his return to Japan from China, Dogen exclaimed: “[N]ot having visited too many monasteries, but having only studied under the late master Rujing and plainly realizing that the eyes are horizontal and the nose vertical, without being deceived by any one, I came home empty-handed.” (Kodera 1980, 77)

One can find this quote easily online. Some websites and a famous biography of Dogen identify the Eihei Koroku (The Extensive Records of Dogen) as the source of this quote. However, closer examination reveals that only: “[N]ot having visited too many monasteries, but having only studied under the Late master Rujing, I came home empty-handed” appears in the oldest existing manuscript of this text, dated to the 16th century, whereas a later manuscript adds “the eyes are horizontal and the nose vertical,”—a quote from the Chinese Zen/Chan canon. Both existing manuscripts are dated a few hundred years after Dogen’s death in 1253. This means we do not know what Dogen said or, indeed, if he uttered this sentence at all. What we know is that there are two versions of the same utterance attributed to Dogen. That may not impact people who seek inspiration, but it does change our understanding of Dogen.

3) This brings us to my third point. If we want to learn from Dogen and understand the Shobogenzo as his text, we need to be aware not only of the history of the text we are reading but also of the historical context of Dogen and his work. Dogen asked different questions than those we ask today. He wrote in response to texts he encountered in Song dynasty China (960–1279) and Kamakura period Japan (1185–1333). He not only promoted the rhetoric of “sitting only” (Jpn. shikantaza) and engaged in discussions of the concept “Buddha nature” (Skt. tathagatagarbha, Jpn. bussho), he was also concerned about the number and form of the precepts (Skt. sila) and the “monastic rules” (Skt. vinaya), and adopted to the new political realities of the Kamakura shogunate that impacted monastic life and the relationships among Buddhist schools (Jpn. shuha). This sounds complex, but if we are able to imagine Dogen’s life, we can obtain a fuller picture and understanding of his texts. 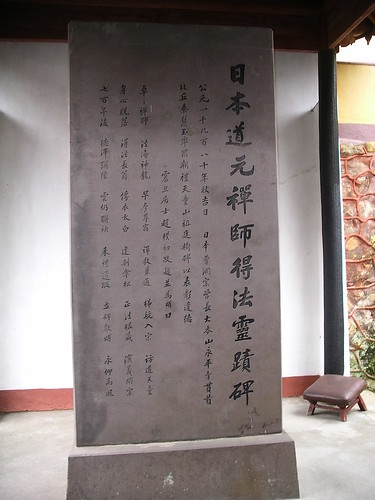 Stone memorial in Tiantongsi in Ningbo that commemorates
Dogen's visit. Image courtesy of the author

4) Of course, it is impossible to reconstruct the life of Dogen and to read his mind. Most of us, even historians, are not only interested in merely understanding Dogen. We read his texts because they speak to us, because they give us a glimpse of the past and our tradition, provide clues for healthier relationships with the environment and other people, clarify our understanding of the world and our place in it, and inspire our spiritual life. If we are clear about our intentions, we not only do more justice to Dogen, we also facilitate a space in which Dogen’s writings can transform our lives.