How to Face Death - Pilgrimages and Death Rituals in Japanese Buddhism

I discussed pilgrimages in Japan in an earlier article on this website.* This month, I am teaching a course in Japan that involves visits to pilgrimage sites mainly associated with the Shingon school of Buddhism. One theme all these sites have in common is that they offer rituals that console those who have lost a loved one and memorialize those who have passed away. While visiting these places with my students, I started to think how Buddhism in Japan provides practitioners and devotees with ritual and metaphysical frameworks to deal with the most challenging of all life events: that of death.

Our first stop in Japan was the western part of Yamagata Prefecture. Nestled comfortably in the foothills of Mt. Yudono are two temples, Dainichibo and Churenji, each of which enshrines one so-called sokushinbutsu. “Sokushinbutsu” literally means “Buddha in this body,” and refers to an extreme form of Buddhist practice in Japan that saw its heyday in the Edo period (1603–1868) and was banned by the Japanese government in the early Meiji period (1868–1912) because it was deemed a form of suicide. 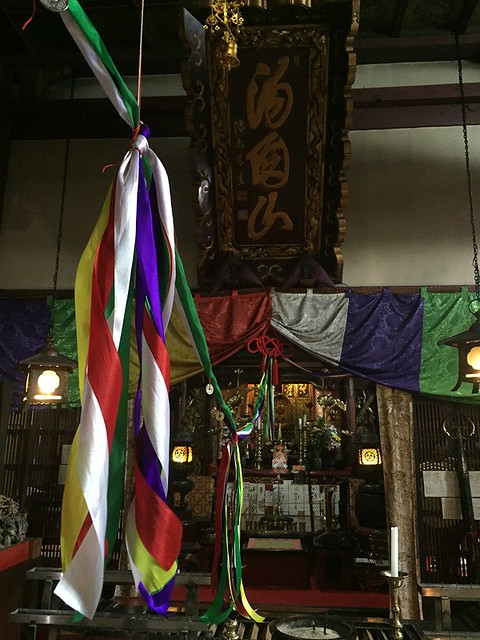 Dainichibo, the temple that enshrines the most famous sokushinbutsu,
Shinnyokai. The cloth rope enables the practitioner to "shake hands" with
Mahavairochana Buddha (Dainichi Nyorai). Photo by Mark Lovelace

The term “sokushinbutsu” refers to Buddhist practitioners who spent years in the mountains living on a diet of nuts, berries, and tree sap while engaging in ascetic practices. Some sources set the length of this practice at three years, while some anecdotes indicate that some practiced for up to ten years. In the second phase of the practice, the diet of the practitioner is limited to salt and water. In the third and last phase, the practitioner enters a box inside a cave, renounces all nourishment, and engages in uninterrupted chanting of sutras and mantras until the physical body ceases to function. At this point, according to devotees, the practitioner transforms from a mere mortal into a “Buddha in this body.” These self-mummified bodies, two of which are said to contain internal organs, are venerated as a “living Buddha” (J. ikite iru hotoke). The enshrined bodies of Shinnyokai at Dainichibo and Tetsumonkai at Churenji attract many pilgrims, the latter also being associated with cases of healing and other miracles.

On the second day, we went to Rishakuji in Yamadera, a temple which is famous for housing mukasari ema and enshrining spirit dolls. The term “mukasari ema” refers to pictures of post-mortem weddings. Spirit dolls are representations of the ghosts to whom the unwed deceased are married. During the wars of the early 20th century, many families of fallen soldiers faced the dilemma that their children had died without being married and were thus condemned to eternal unhappiness. To rectify this predicament, Rishakuji and some other temples offered a space to memorialize those who had departed unwed and their spirit spouses. Later, an equivalent practice was provided for women. The purpose of this tradition was to alleviate the suffering both of those who had died in unfortunate circumstances and of their surviving family members, who were troubled by feelings of anguish and regret. Rishakuji in Yamadera, a temple that houses mukasari ema and spirit dolls. The view is from the Oku no in into the valley. Photo by Mark Lovelace

On the third day, we continued on to Sendai, where we visited memorials to the victims of the 3/11 earthquake and tsunami. In Sendai, we stayed at a Zen temple, Fukujuin, which, like most Buddhist temples in Japan, serves a community (J. danka) in that it houses the local graveyard and enshrines the ihai, or the memorial tablets of the deceased. In Japan, most funerals are performed by Buddhist priests. The Soto Zen funeral ceremony uses texts and prayers similar to those recited in the jukai (“receiving the precepts”) ritual. In fact, during these funerals, the priest administers the “Three Refuges” (in the Buddha, Dharma, and sangha) and the precepts to the spirit of the deceased, upon whom a kaimyo, or “precept name,” is then bestowed. This name is also known as a homyo, or “Dharma name.” In other words, during the funeral, the deceased is officially admitted into the Buddhist sangha.

The last stop on our pilgrimage so far has been Mt. Koya. Mt. Koya comprises the spiritual center of Shingon and, as many Shingon priests will insist, of Japanese Buddhism. The heart of Mt. Koya is the large graveyard surrounding the Oku no in, the mausoleum where the founder of Shingon, Kukai (774–835), is said to reside in eternal meditation. Kukai, who inspired the sokushinbutsu practice, coined the phrase “becoming a Buddha in this body” (J. sokushinjobutsu). While his philosophy evokes the bodhisattva ideal and the non-duality of samsara and nirvana, his devotees believe that he has overcome the cycle of birth and death and attribute to his presence a power that will enable them to enjoy a peaceful life devoid of suffering and lasting happiness after death. 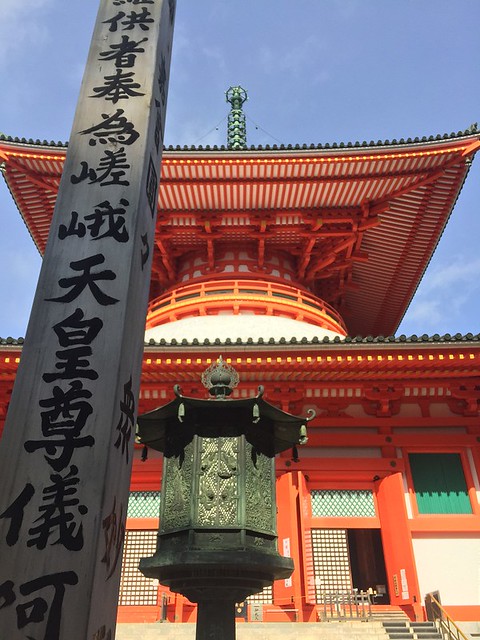 Garan, the Great Stupa of Mt. Koya, which enshrines the five Buddhas of
Shingon Buddhism. Photo by Mark Lovelace

How can we understand these approaches to death and their effect on those who survive the deceased? First, it is important to note that these practices are not representative of the entirety of Japanese, or even of Shingon, Buddhism. Buddhism in Japan is very diverse in its practices and beliefs. Obviously, the practices discussed in this article are at odds with the Buddhist teachings of reincarnation and nirvana. This, however, is not unique to Japan. Quite a few forms of Buddhism outside of Japan include a plethora of practices and beliefs concerning death, many of which cannot be reconciled with the Buddhist principle of “no-self” (Skt. anatman). Like everywhere else, Buddhist practices in Japan are influenced by a variety of traditions. For example, the mukasari ema reflect a Buddhist response to a Confucian need based on Shinto beliefs about the self.

But how can we understand these practices? In some sense, they can be interpreted as “skillful means” (Skt. upaya) insofar as they provide a teaching for people unable to understand the “three characteristics of reality” (Skt. trilakshana: “no-self”; “suffering” [Skt. duhkha]; and “impermanence” [Skt. anitya]). They are expressions of “wisdom” (Skt. prajna) and “compassion” (Skt. karuna) as they enable devotees to deal with the loss, regret, and suffering that come in the wake of losing a loved one, opening up a space that allows people to struggle with the mystery of death and providing aid in the form of a ritual. Ultimately, these forms of ritual deepen our awareness of the human condition, our impermanence, and our interconnectedness. They encourage us to appreciate life and to strive to embody compassion and wisdom.

* Walking with Kukai–Becoming a Buddha: Pilgrimage in Shingon Buddhism