As a Nyingma practitioner for the past 23 years, I found Lama Zopa Rinpoche’s How to Enjoy Death to be an eye-opener. Written from a Gelug point of view, many of the rituals described in the book were unfamiliar, and frankly, any Buddhist book on the topic of death and rebirth that sidesteps the teachings of the Bardo Thodol (Liberation through hearing during the intermediate state, or the Tibetan Book of the Dead) baffles me. Despite this, by the time I had finished reading How to Enjoy Death I knew a great deal more about the techniques and philosophy behind the most widespread of the four great traditions of Tibetan Buddhism. With this book, Lama Zopa Rinpoche has blessed us with a concise and useful guide to the steps leading up to and during the dying process and the reality that arises postmortem.

That being said, How to Enjoy Death does suffer from a number of shortcomings. The very title of the book confounds me. Except for the two pages titled “Give Up Attachment; Enjoy Death” (pp. 23–24), the concept of “enjoying death” is mostly absent from the book. What Rinpoche gives us instead is a powerful exposition of the techniques needed to avoid the panic and confusion that arise in the minds of those unprepared to greet death, and in the lives of the dying person’s loved ones as well. To the extent that achieving any goal is easier, and therefore more enjoyable, if you are well prepared in advance, I think the book’s title is appropriate. Still, I can’t help but think that the title is meant to be provocative, and, ultimately, the book’s subtitle, “Preparing for Life’s Final Challenge without Fear,” is actually the more appropriate title.

With the saucy title, gaudy scarlet ersatz-leather cover, and artificial gold-leaf page edging and lettering, this book is certainly eye-catching. Exactly why the editors at Wisdom Publication designed the physical appearance of How to Enjoy Death to resemble the Christian Bible remains a mystery. Any textual resemblance between this book and the Bible is non-existent, and I will just assume that it is a marketing gimmick. 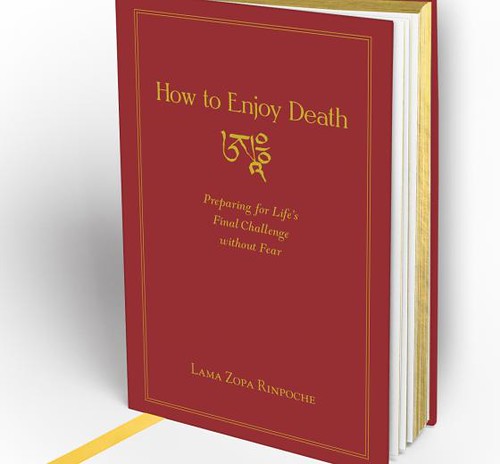 Part I: “Advice on Preparing for Death and Rebirth”

Part I is very well written. It is concise, free from jargon, and not overloaded with metaphysical technicalities. Consider, for example, that the titles of the sub-chapter headings to Part I, Chapter 1—“How to Think about Death and Reincarnation”—are themselves a teaching: “Our Consciousness Continues after Death”; “Reincarnation Is Not Just Some Asian Superstition”; “Reincarnation Hasn’t Been Disproved”; “We Need the Explanations of the Buddha”; “The Great Bodhisattvas Remember Their Past Lives”; “Ordinary People Remember Their Past Lives”; and “We Need to Question Our Assumptions about Reality.”

How to Enjoy Death combines practical guidance with relatable real-life advice. Exclude pets from the dying person’s presence, Rinpoche says, “especially cats—it’s said that their hair is polluted” (p. 69), and he warns that “if a cat sits on the dead body it’s possible a spirit could follow it and enter the body” (p. 112). Other instructions demand stoicism from the friends and family members of the dying person in the bluntest way imaginable: three sub-chapters are titled, plainly, “Be quiet” (pp. 102, 112, and 119). Still other sections address the various ways to determine whether the dying person has already died, at times in the most unsentimental way possible: “The body starting to smell like rotten meat indicates that the consciousness has left” (p. 131). Writing like this makes How to Enjoy Death a masterpiece of down-to-earth advice.

Part I ends with a topic not usually covered in books of this sort, but discussed thoughtfully in How to Enjoy Death is organ donation. Lama Zopa broaches this sensitive topic with a characteristically straightforward rhetorical question: “Does Cutting Out the Organs Disturb the Mind?” (p. 121). The answer offered: no, since the very wish to offer your organs upon death for the benefit of another is an act of great compassion. Part I concludes with powerful chapters offering sound advice and guidance to both the dying person and the caretaker: “Practices to Do during the Hours and Days after the Breath Has Stopped”; “Practices to Do after the Mind Has Left the Body”; and, finally, “What to Do to Escape the Cycle of Birth and Death.”

There are a number of oddities in the book. For example, Rinpoche advises the caretaker to speak about Jesus or God with the dying person, a jarring and seemingly random piece of advice that simply serves to muddle Rinpoche’s message (p. 77). A description of Elvis’s final concert performance (I’m sure that a student passed this anecdote on to Lama Zopa—I find it difficult to imagine that he attended that 1977 Las Vegas concert!), with Elvis “crying and miserable because he knew that he had wasted his life” (p. 29), is just bizarre. Other anecdotes are less strange, however, such as this remarkable tale that deserves a full retelling: “There was a lama in Tibet who heard that some people were going to be executed by the Chinese. He somehow managed to get the execution delayed and then sat in meditation and did the practice—and the people waiting to be executed simply collapsed in a heap, their consciousnesses [sic] having left their bodies, presumably for a pure land. They didn’t need the bullets of the Chinese soldiers! The lama not only saved the people from whatever rebirth awaited them, he also saved the soldiers from the negative karma of killing” (p. 111).

Part II: “Practices for Preparing for Death and Rebirth”

The instructions presented in Part II of How to Enjoy Death are as straightforward as in Part I. Though presented with a Gelug orientation, Rinpoche gives no-nonsense advice to the dying person’s caretaker in a chapter entitled “Ritual Objects to Keep Nearby,” for example, and through the text of appropriate mantras and prayers. Chapters detailing specific meditations to be performed by both the caretaker and the dying person, for their own benefit and everyone else’s as well, are poignant. Certain practices with which I was unfamiliar, such as Vajradaka Fire Puja, Sur, and Jangwa, are lovingly described.

As mentioned earlier in this review, I am a Nyingmapa, and to my detriment I have been wary of the Dharma practices of the other traditions of Tibetan Buddhism and have neither studied nor practiced them. With How to Enjoy Death that wariness is allayed, and I will commence a study of these practices. Ritual practices to perform for the benefit of the dying person are described clearly in the book. Until I read How to Enjoy Death, I never thought that I would even consider studying the pre- and postmortem practices of other traditions of Tibetan Buddhism. That I will do so testifies to the power and compassion with which Lama Zopa has gifted us through this excellent book.

Endnote: Wisdom Publications has thoughtfully included two full-color cards for the caretaker to place on the body of the dying person, a “Liberation Card” and a “Visible Mantra” card. Thirteen color plates of (mainly) Gelug deities for contemplation also adorn the book.

How to Enjoy Death - Preparing for Life’s Final Challenge without Fear, by Lama Zopa Rinpoche, was published by Wisdom Publications, Somerville, Massachusetts, in 2016.